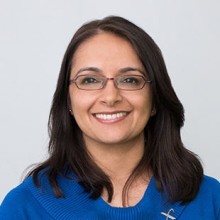 Follow @JyovianStorm
Jyotika Virmani joined XPRIZE in 2014 with more than 10 years of experience in the oceanic and atmospheric sciences, including both research and leadership positions. As Senior Director in Prize Operations, she is the Prize Lead for the next Ocean XPRIZE. Prior to this, she was the Director of Technical Operations for the Wendy Schmidt Ocean Health XPRIZE. To these positions, Virmani brings her scientific and technical expertise and knowledge of ocean and atmospheric observing systems to help address the challenging problems we face in understanding the Earth’s climate system. Before joining XPRIZE, Virmani served as the Associate Director of the Florida Institute of Oceanography, as a Senior Scientist at the Met Office (the UK’s national weather service), and as the Executive Director of the Florida Coastal Ocean Observing System Consortium. In these roles, she has worked with the scientific community to observe, understand, and forecast the marine and atmospheric environments. Virmani has also served on the Scientific Planning Committee for the joint AGU/ASLO/TOS Ocean Sciences 2014 Meeting, on the Board of Directors for the Southeast Atlantic Coastal Ocean Observing System Regional Association, and on the Board of Directors for the Pier Aquarium/Secrets of the Sea. Virmani has a Ph.D. in Physical Oceanography from the University of South Florida, where she worked on both blue water and coastal oceanography. She won a Rotary Foundation Ambassadorial Scholarship which allowed her to earn a M.S. in Marine Environmental Science (Atmospheric Science) from SUNY at Stony Brook. She also has a B.Sc. in Physics from Imperial College London and is an Associate of the Royal College of Science and a Fellow of the Royal Meteorological Society. In her spare time she maintains a humorous and informative tropical storm blog.