A new spin for soft micro-actuators 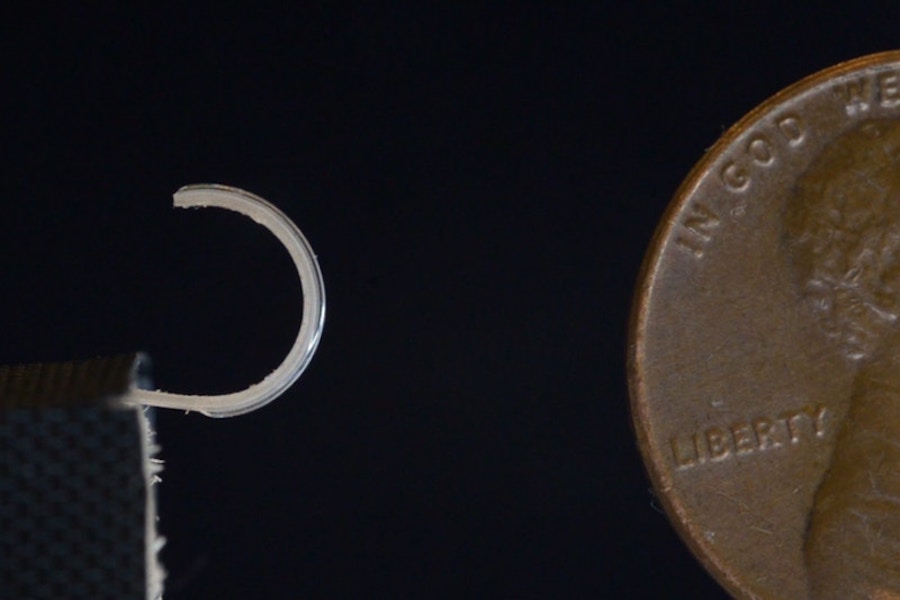 Manipulating delicate tissues such as blood vessels during difficult surgeries, or gripping fragile organisms in the deep sea presents a challenge to surgeons and researchers alike. Roboticists have made inroads into this problem by developing soft actuators on the microscale that are made of elastic materials and, through the expansion or contraction of embedded active components, can change their shapes to gently handle objects without damaging them. However, the specific designs and materials used for their fabrication so far still limit their range of motion and the strength they can exert at scales on which surgeons and researchers would like to use them.

“The fabrication of soft micro-actuators is currently facing two main limitations: the reinforcement layers that direct bending often increase the overall size of the device,” explained Nina Sinatra, a Graduate Student working with Wyss Institute Core Faculty members Robert Wood, Ph.D., and Kevin Kit Parker, Ph.D., at Harvard’s Wyss Institute for Biologically Inspired Engineering and the Harvard Paulson School of Engineering and Applied Sciences (SEAS). “Also, bending micro-actuators in different ways, such as with twisting motions, thus far required that the geometry of the actuator had to be re-designed.”

Now, researchers led by Wood and Parker at the Wyss Institute and SEAS, including Sinatra, have joined their forces to create a new type of soft micro-actuator that can be fabricated using simple shapes and geometries, to exhibit greater toughness and different bend or bend-twist motions. As reported in the Journal of Micromechanics and Microengineering, the team for the first time achieved this feat by combining two very different fabrication approaches and materials with complementary functions.

This video explains how two fabrication techniques, soft lithography and rotary jet spinning of nanofibers, are combined to create a new type of micro-actuator for the manipulation of small fragile objects in challenging environments. Credit: Wyss Institute at Harvard University

“At the start of the project, we hypothesized that we could extend the toughness and bending capabilities of soft micro-actuators simply by reinforcing them with a thin layer of a nanofiber network,” said Sinatra, the study’s first author.

To test this idea, the team first used soft lithography to fabricate the micro-actuator’s elastic component as a thin, elongated shape with a rectangular cross-section. The flexible polymer polydimethylsiloxane (PDMS) was used for this component because of its elastic and chemical properties and compatibility with many biomedical and industrial applications. Soft lithography is a layered fabrication technique that is widely deployed to create diverse micro-scale structures from soft elastomeric materials with the help of stamps, molds, or masks. Choosing to manufacture the micro-actuator layer-by-layer also allowed them to embed a hollow channel along one side, which, in the finished design, can be pressurized with air or liquid to trigger the micro-actuator’s motions.

For the micro-actuator’s nanofiber component, the team took advantage of a rotary jet spinning (RJS) technique previously developed by Parker’s group to create nanofibers from biological materials in an ongoing effort to manufacture regenerating heart valves for patients in need. In RJS, a rotating nozzle extrudes a solution of proteins or polymers that solidify as thin nanofibers; to fabricate nanofabrics for soft micro-actuators, the team used solutions of strong and stretchable synthetic polymers such as nylon and polyurethane. They collected the extruded nanofibers in aligned sheets and bonded laser-cut sections of the sheets to the side opposite of the channel in the soft PDMS component. As the channel is pressurized, the nanofabric will reinforce one side of the actuator and preferentially induce bending toward this direction. This step completed the final composite micro-actuator.

With one end of the actuator free and the other end fixed to a pressure source, the team found their original hypothesis confirmed: the composite soft micro-actuators were 2.3 times tougher than control micro-actuators made of PDMS alone and capable of withstanding pressures almost 26% higher. “By varying the nanofiber orientation and incising angled patterns into nanofiber sheets, we could program bend-twist motions into the soft micro-actuators, which widens our design space and the usability of these micro-devices significantly,” said Sinatra. The resulting micro-actuators are the slimmest soft pneumatic devices to achieve a more complex bending-twisting motion, which point to the potential for unprecedented delicate manipulation on the microscale.

“This new prototype of nanofiber-enforced soft micro-actuators is a compelling starting point for real-world applications that, interfacing this new actuator design with other tools, can facilitate micromanipulation of various fragile objects in challenging environments,” said Wood, who also is the Charles River Professor of Engineering and Applied Sciences at SEAS.