A soft, on-the-fly solution to a hard, underwater problem 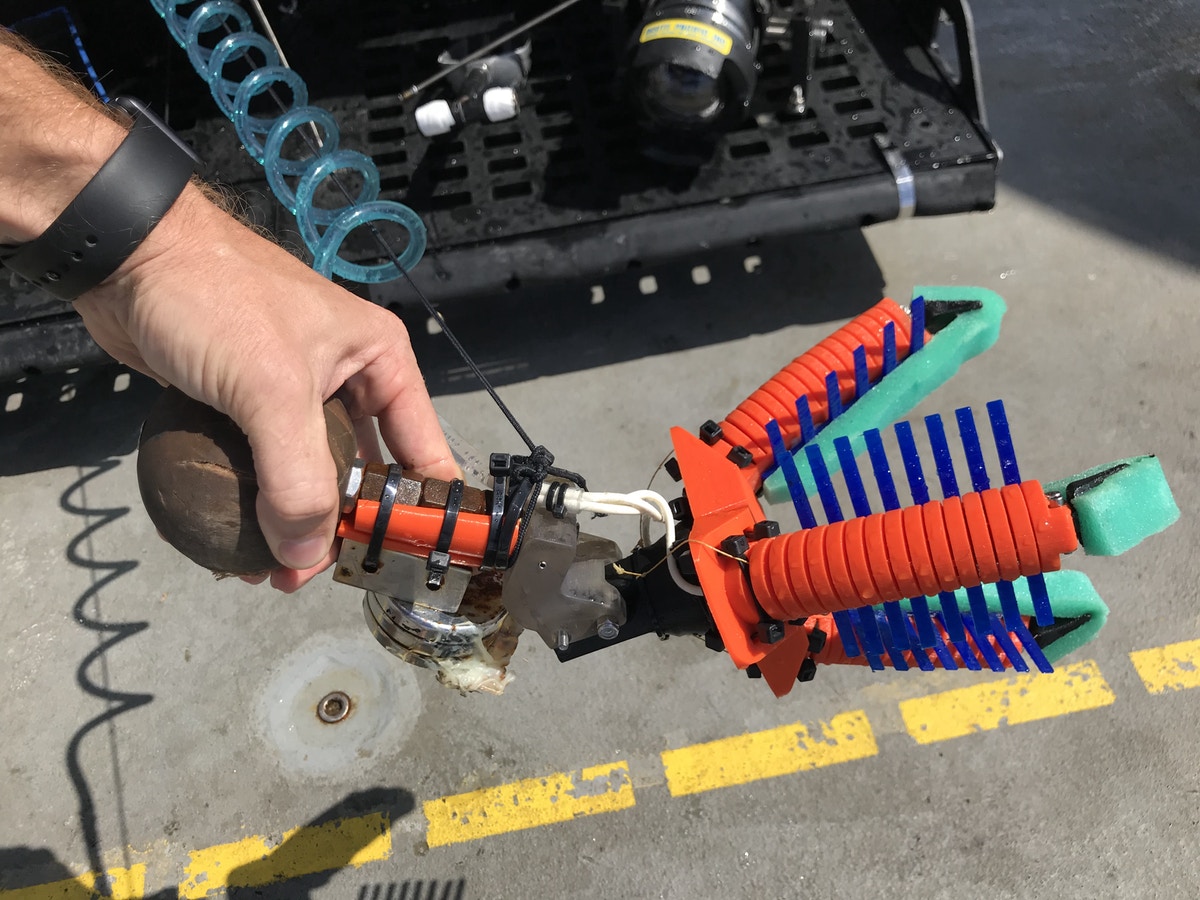 his fully 3D-printed version of the grippers includes “fingernails” on the ends of the fingers to help pick up organisms that are sitting on hard surfaces, as well as mesh extensions between the fingers to keep samples secure. Credit: Wyss Institute at Harvard University

The deep ocean – dark, cold, under high pressure, and airless – is notoriously inhospitable to humans, yet it teems with organisms that manage to thrive in its harsh environment. Studying those creatures requires specialized equipment mounted on remotely operated vehicles (ROVs) that can withstand those conditions in order to collect samples. This equipment, designed primarily for the underwater oil and mining industries, is clunky, expensive, and difficult to maneuver with the kind of control needed for interacting with delicate sea life. Picking a delicate sea slug off the ocean floor with these tools is akin to trying to pluck a grape using pruning shears.

Now, a multidisciplinary group of engineers, marine biologists, and roboticists has developed an alternative sampling device that is soft, flexible, and customizable, allowing scientists to gently grab different types of organisms from the sea without damaging them, and 3D-print modifications to the device overnight without the need to return to a land-based laboratory. The research is reported in PLOS One.

“When interacting with soft, delicate underwater creatures, it makes the most sense for your sampling equipment to also be soft and gentle,” said co-author Rob Wood, Ph.D., a Founding Core Faculty member of the Wyss Institute who is also the Charles River Professor of Engineering and Applied Sciences at the Harvard John A. Paulson School of Engineering and Applied Sciences (SEAS). “It’s only recently that the field of soft robotics has developed to the point where we can actually build robots that can grasp these animals reliably and harmlessly.”

The “soft gripper” devices the team designed have anywhere from two to five “fingers” made of polyurethane and other squishy materials that open and close via a low-pressure hydraulic pump system that uses seawater to drive their movement. The grippers themselves are attached to a wooden ball that is held and manipulated using an ROV’s existing, hard claw-like tools, controlled by a human operator on the ship to which the ROV is tethered. 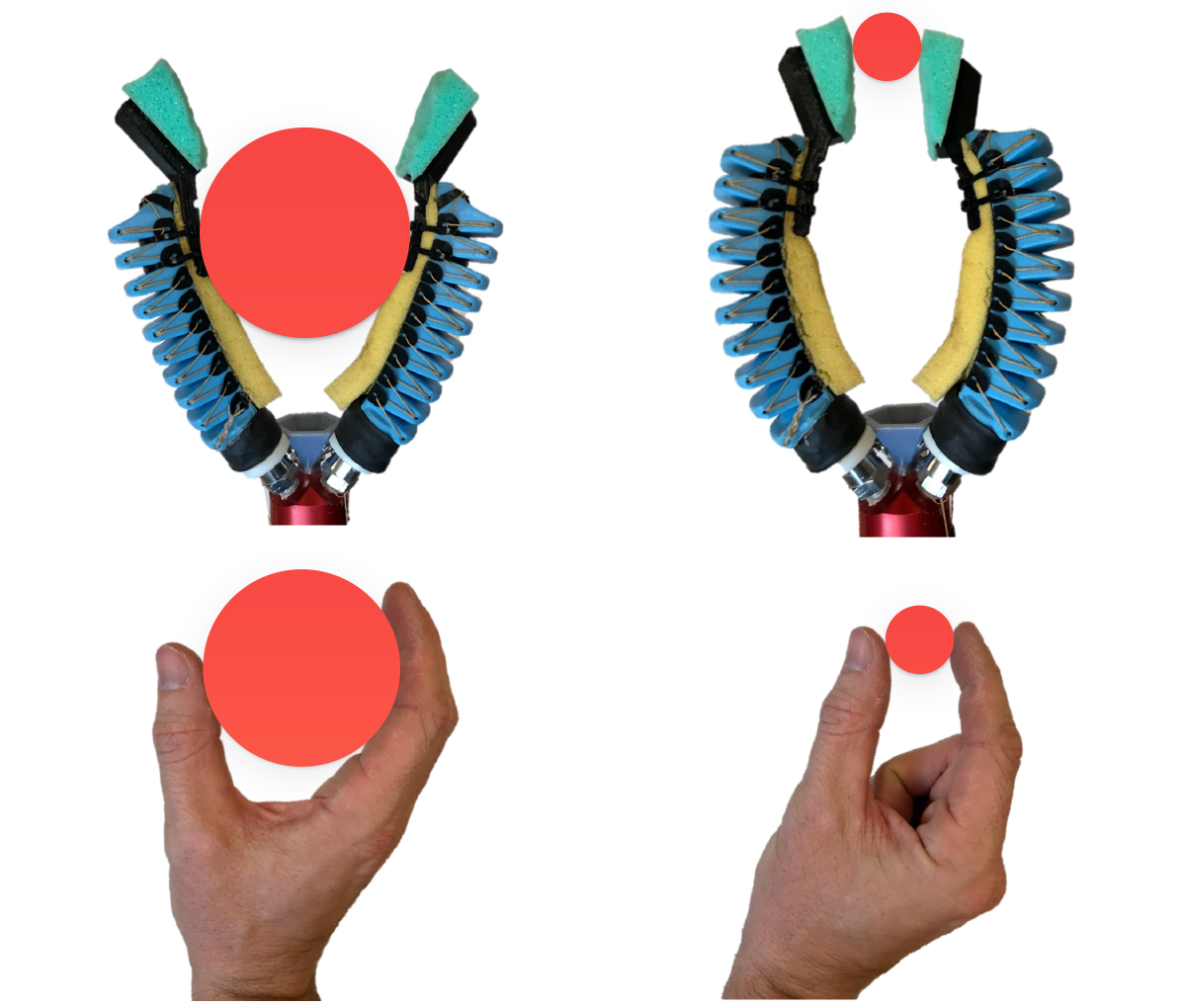 A modified version of the gripper with only two fingers can perform both a “power grasp” for holding large objects and a “pinch grasp” for holding small objects, much like a human hand. Credit: Wyss Institute at Harvard University

The team deployed their latest iteration of the soft grippers on a voyage aboard the Schmidt Ocean Institute’s R/V Falkor in the remote Phoenix Islands Protected Area in the South Pacific. Such an isolated environment meant that obtaining new parts for the grippers would be nearly impossible, so they brought two 3D printers for creating new components on-the-fly.

“Being on a ship for a month meant that we had to be able to make anything we needed, and it turns out that the 3D printers worked really well for doing that on the boat. We had them running almost 24/7, and we were able to take feedback from the ROV operators about their experience using the soft grippers and make new versions overnight to address any problems,” said Daniel Vogt, M.S., a Research Engineer at the Wyss Institute who is the first author of the paper.

The soft grippers were able to grab sea slugs, corals, sponges, and other marine life much more effectively and with less damage than traditional underwater sampling tools. Based on input from the ROV operators, the team 3D-printed “fingernail” extensions that could be added to the gripper’s fingers to help them get underneath samples that were sitting on hard surfaces. A flexible mesh was also added to each finger to help keep samples contained within the fingers’ grip. Another, two-fingered version of the grippers was also created based on ROV pilots’ familiarity with controlling existing two-fingered graspers, and their request that the two fingers be able to hold samples with both a “pinch” grasp (for small objects) and a “power” grasp (for large objects).

The team is continuing to develop the grippers, hoping to add sensors that can indicate to the ROV operator when the grippers come into contact with an organism, “feel” how hard or soft it is, and take other measurements. Ultimately, their goal is to be able to capture sea creatures in the deep ocean and obtain full physical and genetic data without taking them out of their native habitats.

“Being able to 3D-print variations of these soft robots within hours to safely interact with different types of sea life has the potential to revolutionize the way marine biology fieldwork is done,” said co-corresponding author David Gruber, Ph.D., who is a 2017-2018 Radcliffe Fellow, National Geographic Explorer, and Professor of Biology and Environmental Science at Baruch College, CUNY.

“New technologies are continually enabling us to overcome the limitations of old technologies, which all too often are simply accepted as the status quo and never challenged,” said Wyss Institute Founding Director Donald Ingber, M.D., Ph.D., who is also the Judah Folkman Professor of Vascular Biology at HMS and the Vascular Biology Program at Boston Children’s Hospital, as well as Professor of Bioengineering at SEAS. “3D printing and soft robotics technologies are now allowing the processes of design and iteration to happen on-site rather than in the lab, making it faster, easier, and cheaper to create solutions to existing problems.”

The research was supported by the National Oceanographic and Atmospheric Association, the Schmidt Ocean Institute, the National Science Foundation, the National Academy of Sciences, the PIPA Conservation Trust, the PIPA Scientific Committee, and the Wyss Institute at Harvard University.

PUBLICATION – PLOS One: Shipboard design and fabrication of custom 3D-printed soft robotic manipulators for the investigation of delicate deep-sea organisms