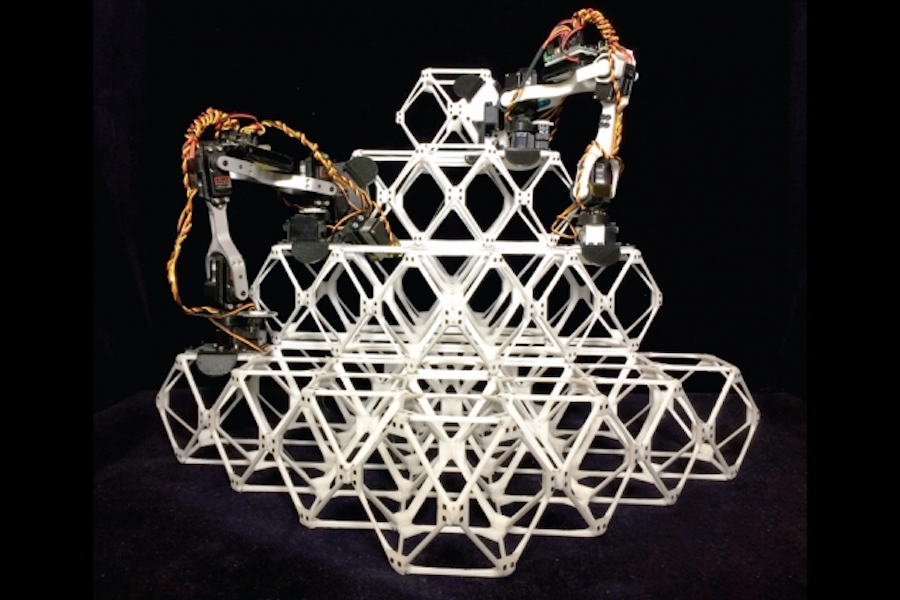 
Today’s commercial aircraft are typically manufactured in sections, often in different locations — wings at one factory, fuselage sections at another, tail components somewhere else — and then flown to a central plant in huge cargo planes for final assembly.

But what if the final assembly was the only assembly, with the whole plane built out of a large array of tiny identical pieces, all put together by an army of tiny robots?

That’s the vision that graduate student Benjamin Jenett, working with Professor Neil Gershenfeld in MIT’s Center for Bits and Atoms (CBA), has been pursuing as his doctoral thesis work. It’s now reached the point that prototype versions of such robots can assemble small structures and even work together as a team to build up a larger assemblies.

The new work appears in the October issue of the IEEE Robotics and Automation Letters, in a paper by Jenett, Gershenfeld, fellow graduate student Amira Abdel-Rahman, and CBA alumnus Kenneth Cheung SM ’07, PhD ’12, who is now at NASA’s Ames Research Center, where he leads the ARMADAS project to design a lunar base that could be built with robotic assembly.

“This paper is a treat,” says Aaron Becker, an associate professor of electrical and computer engineering at the University of Houston, who was not associated with this work. “It combines top-notch mechanical design with jaw-dropping demonstrations, new robotic hardware, and a simulation suite with over 100,000 elements,” he says.

“What’s at the heart of this is a new kind of robotics, that we call relative robots,” Gershenfeld says. Historically, he explains, there have been two broad categories of robotics — ones made out of expensive custom components that are carefully optimized for particular applications such as factory assembly, and ones made from inexpensive mass-produced modules with much lower performance. The new robots, however, are an alternative to both. They’re much simpler than the former, while much more capable than the latter, and they have the potential to revolutionize the production of large-scale systems, from airplanes to bridges to entire buildings.

According to Gershenfeld, the key difference lies in the relationship between the robotic device and the materials that it is handling and manipulating. With these new kinds of robots, “you can’t separate the robot from the structure — they work together as a system,” he says. For example, while most mobile robots require highly precise navigation systems to keep track of their position, the new assembler robots only need to keep track of where they are in relation to the small subunits, called voxels, that they are currently working on. Every time the robot takes a step onto the next voxel, it readjusts its sense of position, always in relation to the specific components that it is standing on at the moment.

The underlying vision is that just as the most complex of images can be reproduced by using an array of pixels on a screen, virtually any physical object can be recreated as an array of smaller three-dimensional pieces, or voxels, which can themselves be made up of simple struts and nodes. The team has shown that these simple components can be arranged to distribute loads efficiently; they are largely made up of open space so that the overall weight of the structure is minimized. The units can be picked up and placed in position next to one another by the simple assemblers, and then fastened together using latching systems built into each voxel.

The robots themselves resemble a small arm, with two long segments that are hinged in the middle, and devices for clamping onto the voxel structures on each end. The simple devices move around like inchworms, advancing along a row of voxels by repeatedly opening and closing their V-shaped bodies to move from one to the next. Jenett has dubbed the little robots BILL-E (a nod to the movie robot WALL-E), which stands for Bipedal Isotropic Lattice Locomoting Explorer.

Computer simulation shows a group of four assembler robots at work on building a three-dimensional structure. Whole swarms of such robots could be unleashed to create large structures such as airplane wings or space habitats. Illustration courtesy of the researchers

Jenett has built several versions of the assemblers as proof-of-concept designs, along with corresponding voxel designs featuring latching mechanisms to easily attach or detach each one from its neighbors. He has used these prototypes to demonstrate the assembly of the blocks into linear, two-dimensional, and three-dimensional structures. “We’re not putting the precision in the robot; the precision comes from the structure” as it gradually takes shape, Jenett says. “That’s different from all other robots. It just needs to know where its next step is.”

As it works on assembling the pieces, each of the tiny robots can count its steps over the structure, says Gershenfeld, who is the director of CBA. Along with navigation, this lets the robots correct errors at each step, eliminating most of the complexity of typical robotic systems, he says. “It’s missing most of the usual control systems, but as long as it doesn’t miss a step, it knows where it is.” For practical assembly applications, swarms of such units could be working together to speed up the process, thanks to control software developed by Abdel-Rahman that can allow the robots to coordinate their work and avoid getting in each other’s way.

This kind of assembly of large structures from identical subunits using a simple robotic system, much like a child assembling a large castle out of LEGO blocks, has already attracted the interest of some major potential users, including NASA, MIT’s collaborator on this research, and the European aerospace company Airbus SE, which also helped to sponsor the study.

One advantage of such assembly is that repairs and maintenance can be handled easily by the same kind of robotic process as the initial assembly. Damaged sections can be disassembled from the structure and replaced with new ones, producing a structure that is just as robust as the original. “Unbuilding is as important as building,” Gershenfeld says, and this process can also be used to make modifications or improvements to the system over time.

“For a space station or a lunar habitat, these robots would live on the structure, continuously maintaining and repairing it,” says Jenett.

Ultimately, such systems could be used to construct entire buildings, especially in difficult environments such as in space, or on the moon or Mars, Gershenfeld says. This could eliminate the need to ship large preassembled structures all the way from Earth. Instead it could be possible to send large batches of the tiny subunits — or form them from local materials using systems that could crank out these subunits at their final destination point. “If you can make a jumbo jet, you can make a building,” Gershenfeld says.

Sandor Fekete, director of the Institute of Operating Systems and Computer Networks at the Technical University of Braunschweig, in Germany, who was not involved in this work, says “Ultralight, digital materials such as [these] open amazing perspectives for constructing efficient, complex, large-scale structures, which are of vital importance in aerospace applications.”

But assembling such systems is a challenge, says Fekete, who plans to join the research team for further development of the control systems. “This is where the use of small and simple robots promises to provide the next breakthrough: Robots don’t get tired or bored, and using many miniature robots seems like the only way to get this critical job done. This extremely original and clever work by Ben Jennet and collaborators makes a giant leap towards the construction of dynamically adjustable airplane wings, enormous solar sails or even reconfigurable space habitats.”

In the process, Gershenfeld says, “we feel like we’re uncovering a new field of hybrid material-robot systems.”