Augmentation: The other side of the robotics coin | Computerworld 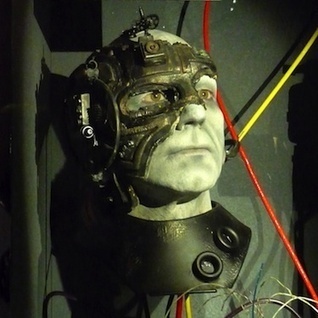 “The line between robots and people will be blurred with smart prosthetics and implanted components,” said Russ Tedrake, an associate professor in electrical engineering and computer science at MIT. “It won’t be robots and people but robot people. If you were in distress and given the choice for a longer, more comfortable life by simply replacing your spleen with a machine that could do the same job, wouldn’t you take it? What if it was a part of your brain?”

Approximately a decade ago I wrote “The other side of the robotics coin is called ‘augmented reality’. AR is about providing people with more (or more relevant) information than what their senses naturally produce, generally in some highly specific context. An AR system might be used to guide a surgeon’s hand, coach a repairman, superimpose radar data over a pilot’s view, guide a taxi driver through an unfamiliar neighborhood, help a fireman locate the safest path through a burning building, or help an unskilled worker accomplish a complicated assembly task.” As it turns out, physical augmentation is at least as important as AR, or maybe it’s just an easier problem.