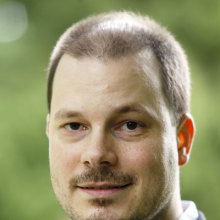 Alexander Leveringhaus is a Post-Doctoral Researcher on the research project ‘Military Enhancement: Design for Responsibility and Combat Systems’, funded by the Dutch Research Council (NWO). This collaborative project between the 3TU Centre for Ethics and Technology and ELAC is based in the 3TU Centre atThe Delft University of Technology, Netherlands. Alex is based in ELAC at the University of Oxford, and works in collaboration with fellow Post-Doctoral Researcher, Tjerk de Greef in Delft. You can read more about the project here. Alex holds a PhD in Government and a Masters in Political Theory from the London School of Economics (LSE), where he also served as an LSE Fellow in Political Theory from 2008-2010. His undergraduate degree in English Literature and Politics is from Oxford Brookes University. In 2011/12, Alex taught just war theory at the Technical University Darmstadt, Germany, and served as a German Research Council-funded post-doctoral research fellow at the Centre for Advanced Study ‘Justitia Amplificata’ based at the Johann-Wolfgang Goethe University Frankfurt, Germany. Alex is interested in how far contemporary technological and political developments necessitate changes to the existing moral and legal frameworks governing the use of armed force. In his doctoral research and during his time at Frankfurt, he explored the repercussions of intrastate conflict, atrocities, and humanitarian occupation for just war theory, developing a liberal conception of military humanitarian intervention which transcends the increasingly influential distinction between cosmopolitan and nationalist forms of philosophical liberalism. In his current post-doctoral research, Alex addresses to what extent the use of advanced IT-information technology in modern targeting systems impacts on the conduct of armed conflict, including the moral psychology of combatants. His work assesses whether the use of IT-technology is compatible with existing jus in bello norms. Specialising in political philosophy and ethics, Alex also has research interests in theories of rights and justice.


›   Robo-Wars: The regulation of robotic weapons