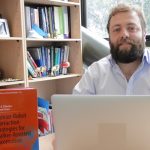 Carlos Andrés Cifuentes García has been an Assistant Professor with the Department of Biomedical Engineering and Head of Center for Biomechatronics at Colombian School of Engineering Julio Garavito (ECIJG-Colombia) since 2016. He has been Visiting Professor at Universidade Federal do Espírito Santo, University of Cauca, Plymouth University, and EPF Graduate School of Engineering. Prior to that, he was a post-doc at Universidade Federal do Espírito Santo (UFES-Brazil). He is broadly interested in human-robot interaction and rehabilitation robotics. He was born in Bogota, Colombia. In 2004, he received the BSc degree in Electronic Engineering from ECIJG, where he received the grade of honor, awarded to the highest GPA of his class. He received his Specialization in Project Management in 2006 at ECIJG. From 2006 to 2011 he worked as an entrepreneur and teaching assistant in the field of embedded systems. In 2011, he obtained his M.Sc. degree in Biomedical Engineering from Universidad Nacional de Entre Ríos, Argentina. His master’s dissertation was lauded as one of “10 finalists at the Make It Challenge: Kinetis MCUs Americas" by Freescale semiconductors. In 2012, he joined the Robotics and Industrial Automation Group at UFES to pursue a Ph.D. degree. He developed a part of his thesis at Automation Institute, (UNSJ-Argentina) and at the Neural and Cognitive Engineering group, CAR, (UPM-CSIC-Spain). His Ph.D. thesis (2015) published by Springer as part of The Springer Tracts in Advanced Robotics (2016), for which he received the Honorable Mention Award CAPES as one of the best theses in 2016 in Brazil, focused on developing a multimodal human-robot interface that provides a means of testing and validating control strategies for robotic walkers for assisting human mobility and gait rehabilitation. In 2017 his work was lauded as one of “five history-changing ideas in Latin America" by History Channel. In 2020 he was elevated to the grade of IEEE Senior member, an honor bestowed by having made significant contributions to the profession. His research on Human-Robot Interaction is world-leading, and his team’s research has conclusively shown the benefits of using robots in a healthcare context. Funding agencies such as the Royal Academy of Engineering (RAEng, UK), Ibero-American Programme on Science and Technology for Development (CYTED) and Ministry of Science, Technology, and Innovation (Minciencias, Colombia) present his research as funding success.