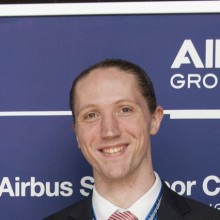 Felix von Drigalski received a diploma in mechanical engineering from the Karlsruhe Institute of Technology (KIT) and the INSA Lyon in 2013. During his studies, he worked for six months in R&D at Thyssen-Krupp Airport Systems (China) Co. Ltd. with an ensuing patent. He worked at the National Institute of Advanced Industrial Science and Technology (AIST) in Odaiba, Tokyo as a researcher until 2014, when he joined the Nara Institute of Science and Technology (NAIST), Japan, as a recipient of the MEXT scholarship. He is currently a Ph.D. candidate in the Robotics Laboratory of the Graduate School of Information Science at NAIST. His research interests include autonomous robots, flexible object manipulation and materials.

›   Winning team story: The ups and downs of building a drilling robot for the Airbus Shopfloor Challenge