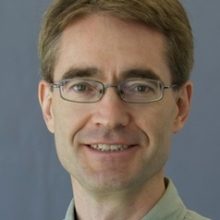 
Professor Goodhill did a Joint Honours BSc in Mathematics and Physics at Bristol University (UK), followed by an MSc in Artificial Intelligence at Edinburgh University and a PhD in Cognitive Science at Sussex University. Following a postdoc at Edinburgh University he moved to the USA in 1994, where he did further postdoctoral study in Computational Neuroscience at Baylor College of Medicine and the Salk Institute. Professor Goodhill formed his own lab at Georgetown University in 1996, where he was awarded tenure in the Department of Neuroscience in 2001. In 2005 he moved to a joint appointment between the Queensland Brain Institute and the School of Mathematical and Physical Sciences at the University of Queensland. From 2005-2011 Professor Goodhill was Editor-in-Chief of the journal Network: Computation in Neural Systems. He is currently an Associate Editor of Neural Computation, and on the Editorial Board of Nature Scientific Reports.