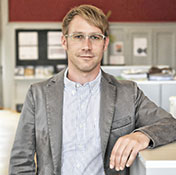 Michael Keller studied Biology with a focus on Neurosciences and Artificial Intelligence at the University of Zurich. Later he worked for four years with the IT publisher IDG Switzerland – first as an editor, later as a producer. In autumn 2009, he completed the MAS programme in Management, Technology and Economics at ETH Zurich. Afterwards he conducted several projects in environmental and sustainable management and worked as a freelance science journalist for different Swiss universities. In June 2013, he joined the News & Media Relations team at ETH Zurich. Here, he is responsible for the "Zukunftsblog" and supports the editorial team of ETH News.