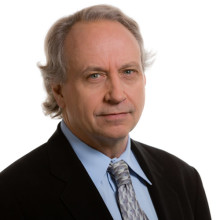 A mathematics undergraduate in his native Australia, Rodney received a Ph.D. in Computer Science from Stanford in 1981. From 1984 to 2010, he was on the MIT faculty, and completed his service as a Professor of Robotics. He was also the founding Director of the Institute’s Computer Science and Artificial Intelligence Laboratory, and served in that role until 2007. In 1990, he co-founded iRobot (NASDAQ: IRBT), where he served variously as CTO, Chairman and board member until 2011. Rodney has been honored by election to the National Academy of Engineering, and has been elected as a Fellow of the American Academy of Arts and Sciences, the Association of Computing Machinery, the Association for the Advancement of Artificial Intelligence, the Institute of Electrical and Electronics Engineers and the American Association for the Advancement of Science.


›   Artificial intelligence is a tool, not a threat