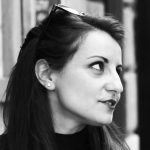 Dr Simona Aracri is a Post-Doctoral Research Associate (PDRA) in the School’s Institute for Integrated Micro and Nano Systems (IMNS) based at the Scottish Microelectronics Centre. Within IMNS, she belongs to the Soft Systems Group. Simona grew up in Genoa, Italy, where she developed an early passion for languages. Motivated to find a challenge which would provide a ‘new insight into the world’ as well as more language practice, Simona enrolled in Marine Engineering and Naval Architecture at the University of Genoa which included an Erasmus year studying at the University of A Coruña in Ferrol, Spain. Next came a Masters in Marine Engineering and Naval Architecture at the University of Trieste, Italy, during which Simona moved to Texel in the Netherlands to write her thesis at the Royal Netherlands Institute for Sea Research (NIOZ). It was during her time in the Netherlands that Simona’s interests crystallised around physical oceanography, which led to another move – this time to the UK, to study for her PhD at the National Oceanography Centre in Southampton with sponsorship from the Italian National Research Council Institute of Marine Sciences. In early 2018 Simona moved to the University of Edinburgh where she holds a PDRA position in the Soft Systems Group and currently works on the award-winning £36M ORCA Hub programme. ORCA Hub is aimed at realising the offshore energy industry's vision for a completely autonomous offshore energy field.


›   Soft robots for ocean exploration and offshore operations: A perspective