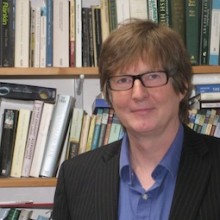 Tony is a Professor of Cognitive Neuroscience at the University of Sheffield and Director of Sheffield Robotics, a cross-disciplinary collaborative enterprise involving both Universities in Sheffield. His primary research goal is to understand natural intelligence, in animals and humans, and to use this understanding to create life-like intelligent robots. With collaborators, he has created a variety of biomimetic robotic systems, including the whiskered robots Scratchbot and Shrewbot, exploration strategies and autobiographical memory systems for the humanoid iCub robot, and wearable sensory substitution systems. He is involved in a number of commercial projects to develop novel assistive and companion robots, and believes that developers of disruptive technologies should think carefully about the potential societal impacts of their work. In 2012, he led a European working group on the societal impacts of robotics and since then has been actively investigating ethical and societal issues raised by robotics, artificial intelligence, virtual reality and telepresence.


›   Why watching Westworld’s robots should make us question ourselves