It’s been two years since the last time I judged the Automate Startup Competition. More than any other trade show contest, this event has been an oracle of future success. In following up with the last vintage of participants, all of the previous entrees are still operating and many are completing multi-million dollar financing rounds. As an indication of the importance of the venue, and quite possibly the growth of the industry, The Robot Report announced last week that 2017 finalist, Kinema Systems was acquired by SoftBank’s Boston Dynamics. 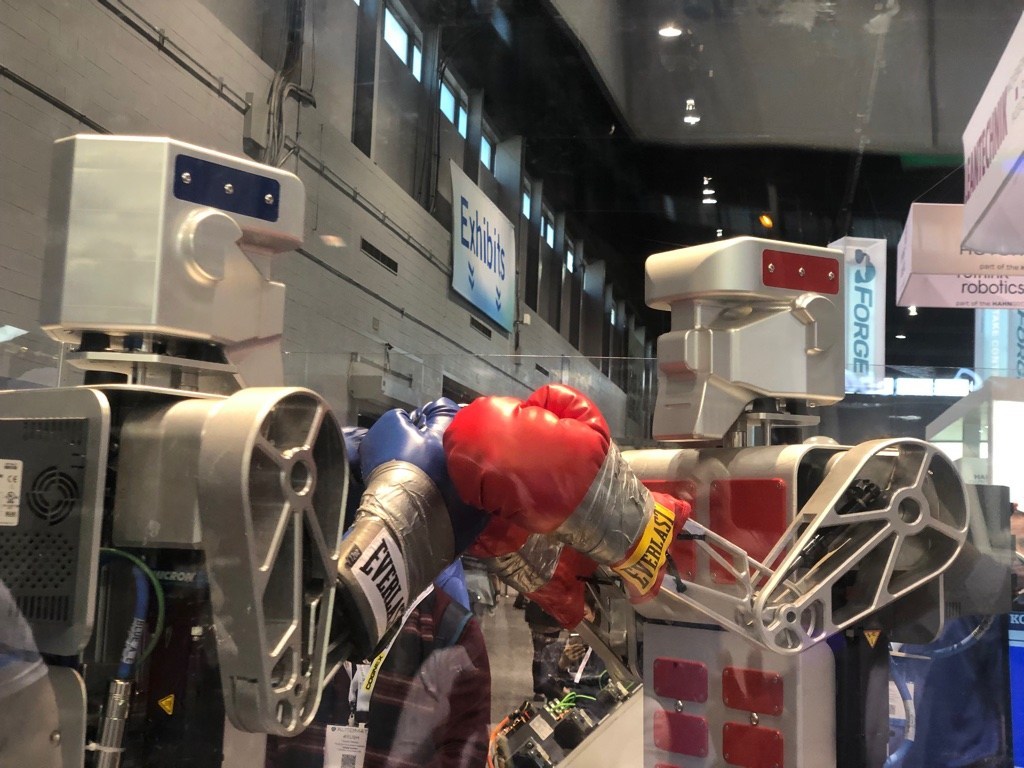 Traditionally, autonomous machines at the ProMat Show have been relegated to a subsection of the exhibit floor under the Automate brand. A couple of years ago there were a handful of self-driving rovers with twice as many robotic arms, today almost one third of the entire McCormick Center was promoting unmanned solutions. As e-commerce sales continue to explode, pressuring fulfilment centers nationwide, the logistics industry now demands two separate conventions with Automate 2021 being held in the Motor City for the first time. This palpable buzz formed the backdrop to the packed startup theater that represented the burgeoning mechatronic ecosystem. In the words of Jeff Burnstein, president of A3 (Automate’s organizers), “Automation is among the most dynamic emerging markets, with venture funding increasing robustly each year. The finalists in the Automate Launch Pad Startup Competition represent the many types of innovation that will transform the manufacturing and services sectors over the next decade.”

Freeing The Supplychain From Bottlenecks

The first company that presented, IM Systems (IMS) traveled from the Netherlands to Chicago to unveil its invention that strikes at the core of the robo-universe – actuation. Today, most of the co-bots deployed are utilizing rotary actuators from Japanese-owned Harmonic Drive (HD). HD’s speed reducers are the industry’s standard for gearing technology, offering the greatest level of movement control, force and precision of any  commercially available mechanical system. This has translated to more than $500 million in annual revenue for HD and is projected to grow to more than $3 billion by 2024. HD’s grip on the industry is citied by many as the main reason why collaborative robot companies have failed to achieve unicorn-level growth. Currently unchallenged by competitors, HD has been free to artificially inflate prices by stiffly controlling the number of units it ships a year, maintaining a careful balance of low supply and high demand. As Thibaud Verschoor, founder of IM Systems, walked on stage I eagerly awaited to hear how his company was planning to disrupt HD’s virtual monopoly. Verschoor introduced a toothless gearbox called the Archimedes Drive that relies on friction instead of gear teeth to transmit torque, promising greater precision and lower cost thus hitting directly at Harmonic Drive. Originating from the Delft University of Technology, IMS is already boasting of its growing list of pre-orders with roboticists lining up for a long-awaited alternative. The startup founder quipped that today it is ‘now quicker to gestate a baby than get an actuator from Harmonic Drive, but not anymore’ as its business child will be shipping next year.

In addition to actuation, energy efficiency has been a hurdle for robots in completing unplugged missions. WiBotic, an innovation spun out of the University of Washington, promises continuous charging availability with its patented wireless inductive power transfer system. Dr. Ben Waters took to the stage to demonstrate how WiBotic is able to charge unmanned vehicles and drones within a ten centimeter proximity of his transfer coils. In addition, WiBotic’s platform is also able to monitor a facility’s entire fleet of autonomous systems to provide managers with better power consumption and machine utilization data, enabling greater productivity and cost efficiency. When I asked Dr. Waters what is next for his company, he exclaimed that they have conquered the air with drones, land with robots, now they are aiming at the sea.

Labor more than any other theme was the big discussion on the floor of ProMat and Automate. While many pundits decry automation for taking jobs, Daniel Theobald of Vecna Robotics shared with me, at our fireside chat, that no one has been fired because of a robot. In fact, today there are not enough humans to fulfill the growing demand of a global economy. One of the most grueling tasks still performed by humans is riveting, often performed in stiff contortions for hours at a time. Wilder Systems is a new collaborative robot system for the aerospace industry to relieve humans from the repetitive dangerous occupation of vertical drilling and fastening performed during fuselage manufacturing. Wilder offers a modular mobile system that is affordable for factories in providing their customers with greater speed, consistency, and accuracy. Until recently robotic systems like Wilder were only available to large corporations but  now with the startups “robot-as-a-service” business model, smaller aircraft plants are able to automate.

When moderating a session the day before about the definition of success in deploying robots, a large grocery store operator asked the panel what is available for his needs. While hard goods is challenging, picking up the wide variety of fragile organic materials of food is almost impossible for traditional metal grippers. While there are a small number of soft robot solutions available on the market, most require air to be pumped into their elastomeric end effectors, adding cost and complexity to the installation. Ubiros claims to be the “first fully electrically operated soft gripper” without any expensive peripheral equipment, such as pressurized air. To illustrate the tenderness of their solution the startup showcased FlowerBot, a robot arm with their gripper that is capable of picking up roses to create attractive (pre-programmed) bouquets. Dr. Cagdas D. Onal, the company’s founder, proudly introduced the judges to their new customer that just purchased 250 units to begin automating his floral fulfillment center. To Dr Onal’s credit, the Automate pavilion literally smelled like roses as throngs of people sat in the theater with vases on their laps.

An old proverb teaches that “seeing is believing,” unfortunately machines are often plagued more by Murphy’s Law during the on-boarding process. Firefly Dimension, an augmented reality startup for industrial applications, is focusing on speeding up manufacturing and product development with its unique perspective. Firefly’s headset is the only one in development promoting a 100% field of view equal to one’s eyes. This translates to lower down time, costs and potentially better outcomes. The company shared with the judges its early successes with manufacturers in China that are already testing their prototypes in their production facilities. As many industry analysts project the market for augmented reality solutions to exceed $60 billion by 2024, the Silicon Valley team of entrepreneurs is well positioned to take advantage of the next stage of automation technologies.

Making Robots Accessible For The Masses

According to Dr. Rahul Chipalkatty, CEO of Southie Autonomy, most of the tasks in the warehouse and factory are not automated because they change too quickly for professional integrators and on-staff engineers to respond. Dr. Chipalkatty asserts that this market is actually the lowest hanging fruit for automation, but has remained untapped as technologists have failed to target non-technical workers. To counter this trend, Southie literally developed a magic wand that utilizes artificial intelligence, gesture control and augmented reality projections to train robots on the fly to respond to spontaneous jobs. The Boston-based startup is marketing its technology for “ANY industrial robot to be re-purposed and re-deployed by ANY person, without robotics expertise or even computer skills.” Companies like Southie that focus on ease-of-use interfaces will only further the overall adoption of robotics in the coming years for millions of employees globally.

On the day of the startup competition, Realtime Robotics announced the launch of its proprietary computer board and software that enables “collision-free” motion planning within milliseconds for collaborative robots and autonomous vehicles to work together. Marketed as RapidPlan and RapidSense the startup contends that its solution is the only one available to enable machines to safely operate within workcells with humans and other robots simultaneously. According to the press release (which was later explained on stage) RapidPlan enables users to load up to “20 million motions” into the system that analyzes “800,000 motions at 30 frames-per-second” which is automatically integrated with the machines onboard sensors via RapidSense. Realtime Robotics’ CEO, Peter Howard, bragged, “Our collision-free motion planning solutions allow robots to perform safely in dynamic, unstructured, and collaborative workspaces, while instantaneously reacting to changes as they occur.” Realtime, backed by Toyota AI, is definitely on my startup watch list for 2019/2020.

And The Winner Is…

Deliberating in the judges room, we were challenged to pick a winner from so many qualified diverse startups. Balancing the presentations against the immediate needs of automation industry, one company universally stood out for its important contribution. IM Systems’ Archimedes Drive has the potential to generate a billion-dollar valuation with its promise of bringing down the cost of adoption and quickening the speed of deployment. Following the show, I caught up with IMS founder Jack Schorsch and asked him how he plans to compete against a multinational conglomerate like Harmonic Drive. Schorsch responded, “I do think that HD & Nabtesco have to some degree deliberately throttled their supply, in order to keep unit profits high on sales to everyone but Fanuc/ABB/Yaskawa. On the flip side, I know in my bones that if you can come to market with a technically comparable or better drive you can sell every unit that you can make.”

Join RobotLab on May 16th when we host a discussion with Alexis Block, inventor of HuggieBot, and Andrew Flett, partner at Mobility Impact Partners, on “Society 2.0: Understanding The Human-Robot Connection In Improving The World,” RSVP Today!