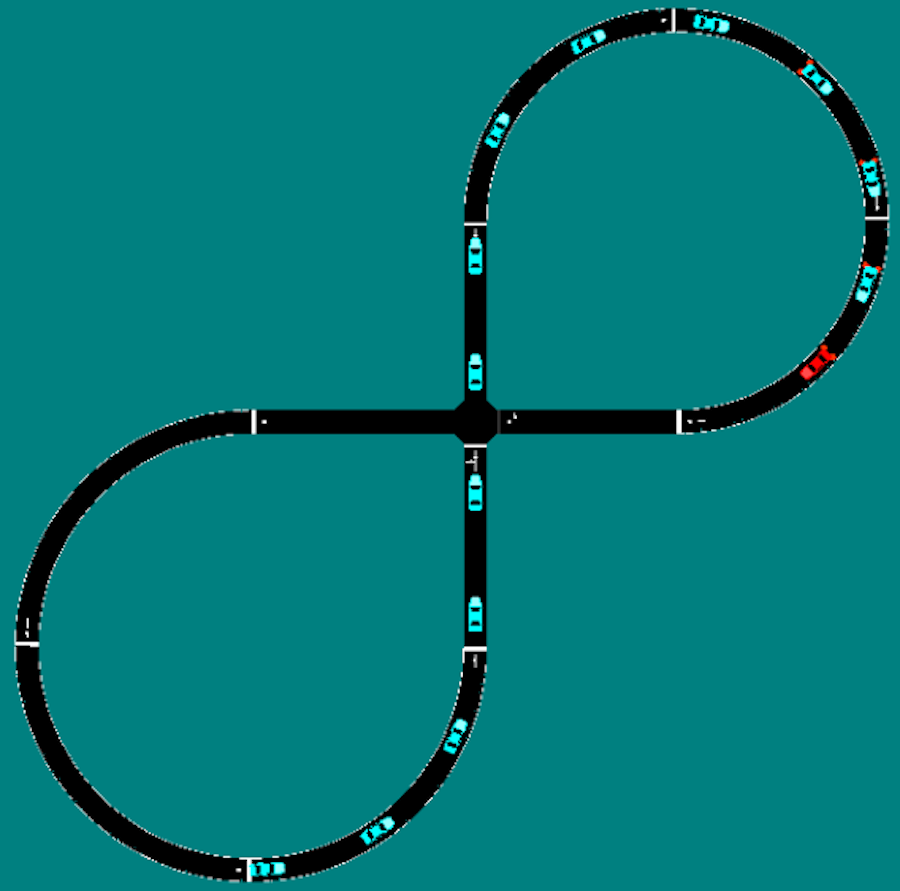 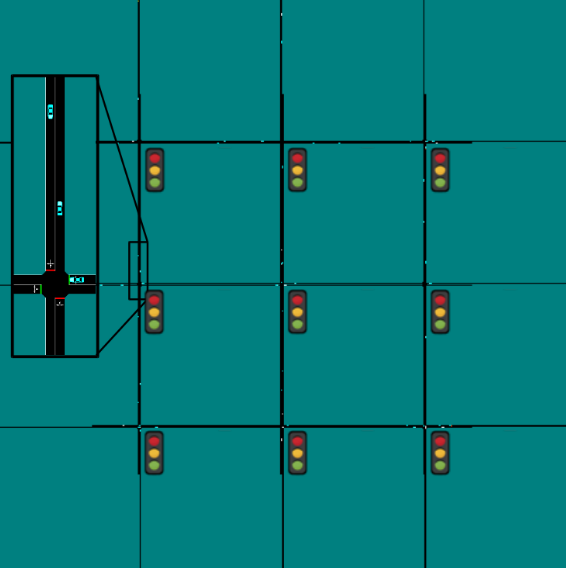 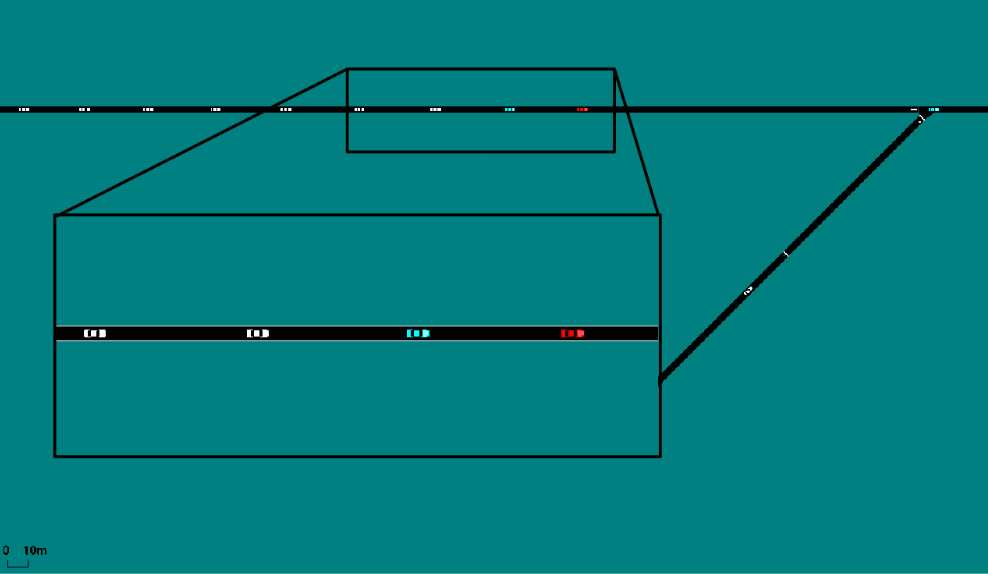 We are in the midst of an unprecedented convergence of two rapidly growing trends on our roadways: sharply increasing congestion and the deployment of autonomous vehicles. Year after year, highways get slower and slower: famously, China’s roadways were paralyzed by a two-week long traffic jam in 2010. At the same time as congestion worsens, hundreds of thousands of semi-autonomous vehicles (AVs), which are vehicles with automated distance and lane-keeping capabilities, are being deployed on highways worldwide. The second trend offers a perfect opportunity to alleviate the first. The current generation of AVs, while very far from full autonomy, already hold a multitude of advantages over human drivers that make them perfectly poised to tackle this congestion. Humans are imperfect drivers: accelerating when we shouldn’t, braking aggressively, and make short-sighted decisions, all of which creates and amplifies patterns of congestion.

On the other hand, AVs are free of these constraints: they have low reaction times, can potentially coordinate over long distances, and most importantly, companies can simply modify their braking and acceleration patterns in ways that are congestion reducing. Even though only a small percentage of vehicles are currently semi-autonomous, existing research indicates that even a small penetration rate, 3-4%, is sufficient to begin easing congestion. The essential question is: will we capture the potential gains, or will AVs simply reproduce and further the growing gridlock?

Given the unique capabilities of AVs, we want to ensure that their driving patterns are designed for maximum impact on roadways. The proper deployment of AVs should minimize gridlock, decrease total energy consumption, and maximize the capacity of our roadways. While there have been decades of research on these questions, there isn’t an existing consensus on the optimal driving strategies to employ, nor easy metrics by which a self-driving car company could assess a driving strategy and then choose to implement it in their own vehicles. We postulate that a partial reason for this gap is the absence of benchmarks: standardized problems which we can use to compare progress across research groups and methods. With properly designed benchmarks we can examine an AV’s driving behavior and quickly assign it a score, ensuring that the best AV designs are the ones to make it out onto the roadways. Furthermore, benchmarks should facilitate research, by making it easy for researchers to rapidly try out new techniques and algorithms and see how they do at resolving congestion.

In an attempt to fill this gap, our CORL paper proposes 11 new benchmarks in centralized mixed-autonomy traffic control: traffic control where a small fraction of the vehicles and traffic lights are controlled by a single computer. We’ve released these benchmarks as a part of Flow, a tool we’ve developed for applying control and reinforcement learning (via using RLlib and rllab as the reinforcement learning libraries) to autonomous vehicles and traffic lights in the traffic simulators SUMO and AIMSUN. A high score in these benchmarks means an improvement in real-world congestion metrics such as average speed, total system delay, and roadway throughput. By making progress on these benchmarks, we hope to answer fundamental questions about AV usage and provide a roadmap for deploying congestion improving AVs in the real world.

The benchmark scenarios, depicted at the top of this post, cover the following settings:

As an example of an exciting and helpful emergent behavior that was discovered in these benchmarks, the following GIF shows a segment of the bottleneck scenario in which the four lanes merge down to two, with a two-to-one bottleneck further downstream that is not shown. In the top, we have the fully human case in orange. The human drivers enter the four-to-two bottleneck at an unrestricted rate, which leads to congestion at the two-to-one bottleneck and subsequent congestion that slows down the whole system. In the bottom video, there is a mix of human drivers (orange) and autonomous vehicles (red). We find that the autonomous vehicles learn to control the rate at which vehicles are entering the two-to-one bottleneck and they accelerate to help the vehicles behind them merge smoothly. Despite only one in ten vehicles being autonomous, the system is able to remain uncongested and there is a 35% improvement in the throughput of the system.

Once we formulated and coded up the benchmarks, we wanted to make sure that researchers had a baseline set of values to check their algorithms against. We performed a small hyperparameter sweep and then ran the best hyperparameters for the following RL algorithms: Augmented Random Search, Proximal Policy Optimization, Evolution Strategies, and Trust Region Policy Optimization. The top graphs indicate baseline scores against a set of proxy rewards that are used during training time. Each graph corresponds to a scenario and the scores the algorithms achieved as a function of training time. These should make working with the benchmarks easier as you’ll know immediately if you’re on the right track based on whether your score is above or below these values.

From an impact on congestion perspective however, the graph that really matters is the one at the bottom, where we score the algorithms according to the metrics that genuinely affect congestion. These metrics are: average speed for the Figure Eight and Merge, average delay per vehicle for the Grid, and total outflow in vehicles per hour for the bottleneck. The first four columns are the algorithms graded according to these metrics and in the last column we list the results of a fully human baseline. Note that all of these benchmarks are at relatively low AV penetration rates, ranging from 7% at the lowest to 25% at the highest (i.e. ranging from 1 AV in every 14 vehicles to 1 AV in every 4). The congestion metrics in the fully human column are all sharply worse, suggesting that even at very low penetration rates, AVs can have an incredible impact on congestion. 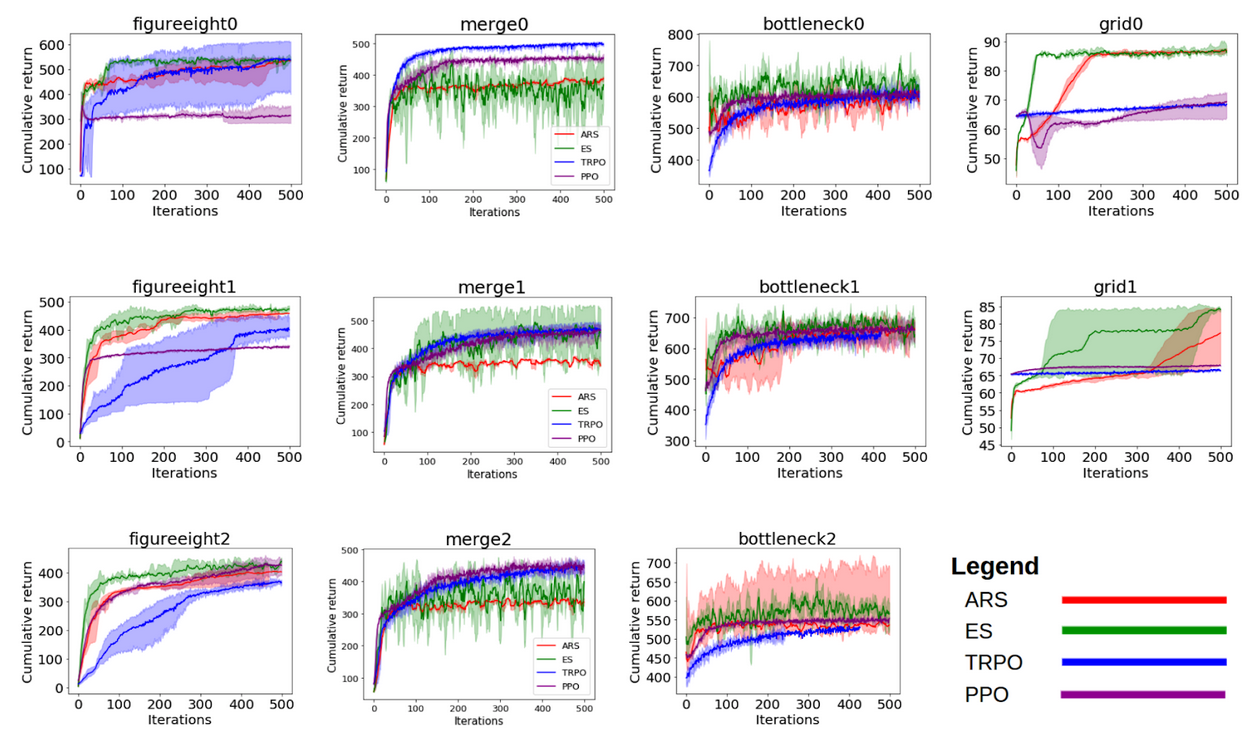 So how do the AVs actually work to ease congestion? As an example of one possible mechanism, the video below compares an on-ramp merge for a fully human case (top) and the case where one in every ten drivers is autonomous (red) and nine in ten are human (white). In both cases, a human driver is attempting to aggressively merge onto the ramp with little concern for the vehicles on the main road. In the fully human case, the vehicles are packed closely together, and when a human driver sharply merges on, the cars behind need to brake quickly, leading to “bunching”. However, in the case with AVs, the autonomous vehicle accelerates with the intent of opening up larger gaps between the vehicles as they approach the on-ramp. The larger spaces create a buffer zone, so that when the on-ramp vehicle merges, the vehicles on the main portion of the highway can brake more gently.

There is still a lot of work to be done; while we’re unable to prove it mathematically, we’re fairly certain that none of our results achieve the optimal top scores and the full paper provides some arguments suggesting that we’ve just found local minima.

There’s a large set of totally untackled questions as well. For one, these benchmarks are for the fully centralized case, when all the cars are controlled by one central computer. Any real road driving policy would likely have to be decentralized: can we decentralize the system without decreasing performance? There are also notions of fairness that aren’t discussed. As the video below shows, bottleneck outflow can be significantly improved by fully blocking a lane; while this driving pattern is efficient, it severely penalizes some drivers while rewarding others, invariably leading to road rage. Finally, there is the fascinating question of generalization. It seems difficult to deploy a separate driving behavior for every unique driving scenario; is it possible to find one single controller that works across different types of transportation networks? We aim to address all of these questions in a future set of benchmarks.

If you’re interested in contributing to these new benchmarks, trying to beat our old benchmarks, or working towards improving the mixed-autonomy future, get in touch via our GitHub page or our website!

Thanks to Jonathan Liu, Prastuti Singh, Yashar Farid, and Richard Liaw for edits and discussions. Thanks to Aboudy Kriedieh for helping prepare some of the videos. This article was initially published on the BAIR blog, and appears here with the authors’ permission.