Abstract: “Abstract: A long-standing question in HRI is what effects a robot’s human-like appearance has on various psychological responses. A substantial literature has demonstrated such effects on liking, trust, ascribed intelligence, and so on. Much of this work has relied on a construct of uni-dimensional low to high human-likeness. I introduce evidence for an alternative view according to which robot appearance must be described in a three-dimensional space, encompassing Body/Manipulators (e.g., torso, arms, legs), Facial Features (e.g., head, eyes), and Surface Look (e.g., eyelashes, skin, genderedness). The broad human-likeness concept can thus be decomposed into more concrete appearance dimensions, and robots’ degrees of human-likeness are constituted by different combinations of these dimensions. In a study using 24 robots selected from this three-dimensional appearance space, I then show that the different dimensions separately predict inferences people make about the robot’s affective, social-moral, and physical capacities.” 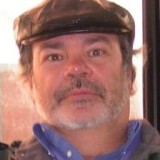 Metals shop and auto mechanics in high school; B.A. in Biology, eventually leading to an interest in General Systems and computing; interest in robotics sparked by the realization that autonomous machines could enable a vast improvement in land management.