Can RL from pixels be as efficient as RL from state?

A remarkable characteristic of human intelligence is our ability to learn tasks quickly. Most humans can learn reasonably complex skills like tool-use and gameplay within just a few hours, and understand the basics after only a few attempts. This suggests that data-efficient learning may be a meaningful part of developing broader intelligence.

On the other hand, Deep Reinforcement Learning (RL) algorithms can achieve superhuman performance on games like Atari, Starcraft, Dota, and Go, but require large amounts of data to get there. Achieving superhuman performance on Dota took over 10,000 human years of gameplay. Unlike simulation, skill acquisition in the real-world is constrained to wall-clock time. In order to see similar breakthroughs to AlphaGo in real-world settings, such as robotic manipulation and autonomous vehicle navigation, RL algorithms need to be data-efficient — they need to learn effective policies within a reasonable amount of time. 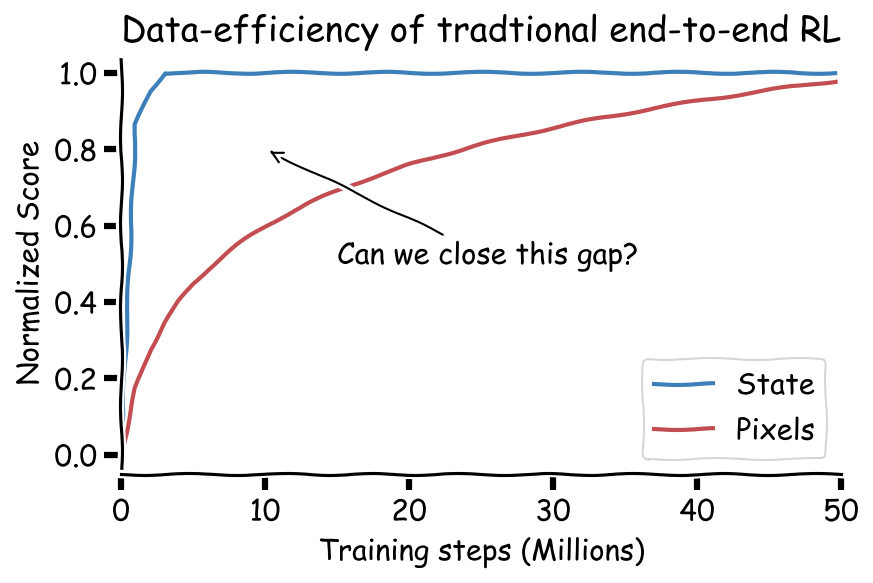 Recently, there have been several algorithmic advances in Deep RL that have improved learning policies from pixels. The methods fall into two categories: (i) model-free algorithms and (ii) model-based (MBRL) algorithms. The main difference between the two is that model-based methods learn a forward transition model $p(s_{t+1}|,s_t,a_t)$ while model-free ones do not. Learning a model has several distinct advantages. First, it is possible to use the model to plan through action sequences, generate fictitious rollouts as a form of data augmentation, and temporally shape the latent space by learning a model.

However, a distinct disadvantage of model-based RL is complexity. Model-based methods operating on pixels require learning a model, an encoding scheme, a policy, various auxiliary tasks such as reward prediction, and stitching these parts together to make a whole algorithm. Visual MBRL methods have a lot of moving parts and tend to be less stable. On the other hand, model-free methods such as Deep Q Networks (DQN), Proximal Policy Optimization (PPO), and Soft Actor-Critic (SAC) learn a policy in an end-to-end manner optimizing for one objective. While traditionally, the simplicity of model-free RL has come at the cost of sample-efficiency, recent improvements have shown that model-free methods can in fact be more data-efficient than MBRL and, more surprisingly, result in policies that are as data efficient as policies trained on coordinate state. In what follows we will focus on these recent advances in pixel-based model-free RL. 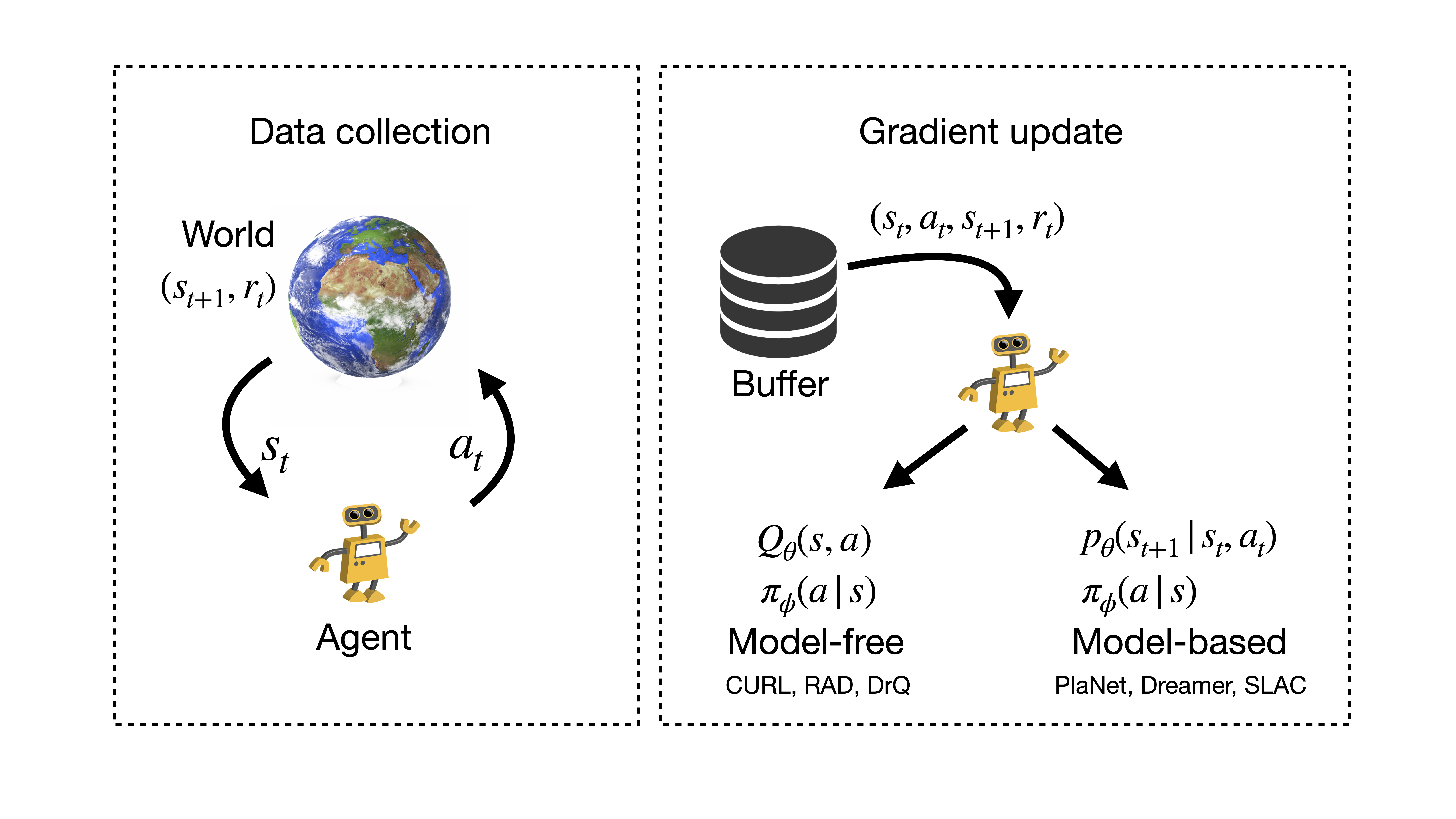 CURL was inspired by recent advances in contrastive representation learning in computer vision (CPC, CPCv2, MoCo, SimCLR). Contrastive learning aims to maximize / minimize similarity between two similar / dissimilar representations of an image. For example, in MoCo and SimCLR, the objective is to maximize agreement between two data-augmented versions of the same image and minimize it between all other images in the dataset, where optimization is performed with a Noise Contrastive Estimation loss. Through data augmentation, these representations internalize powerful inductive biases about invariance in the dataset.

In the RL setting, we opted for a similar approach and adopted the momentum contrast (MoCo) mechanism, a popular contrastive learning method in computer vision that uses a moving average of the query encoder parameters (momentum) to encode the keys to stabilize training. There are two main differences in setup: (i) the RL dataset changes dynamically and (ii) visual RL is typically performed on stacks of frames to access temporal information like velocities. Rather than separating contrastive learning from the downstream task as done in vision, we learn contrastive representations jointly with the RL objective. Instead of discriminating across single images, we discriminate across the stack of frames. 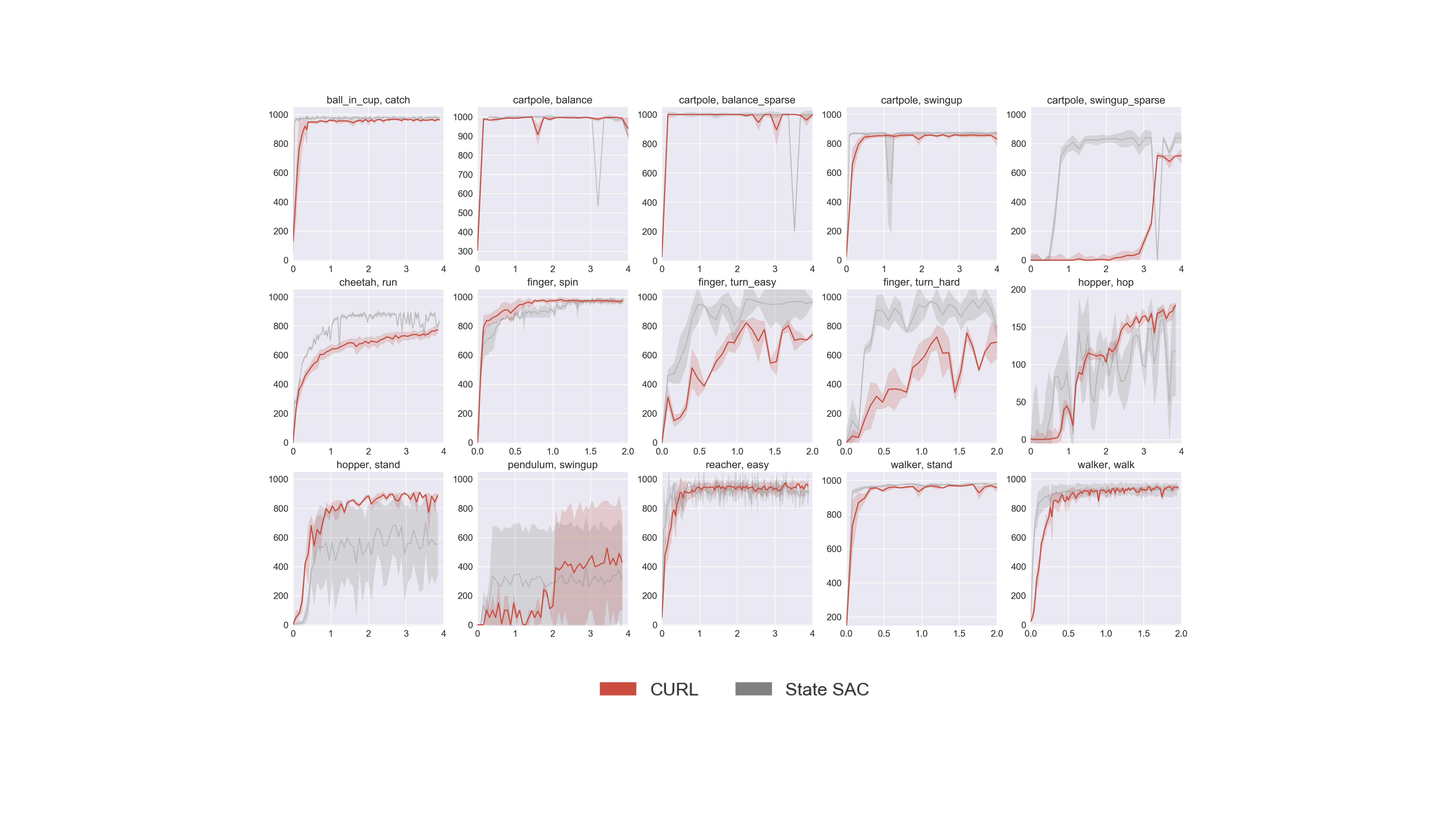 We also demonstrate data-efficiency gains on the Atari 100k step benchmark. In this setting, we couple CURL with an Efficient Rainbow DQN (Eff. Rainbow) and show that CURL outperforms the prior state-of-the-art (Eff. Rainbow, SimPLe) on 20 out of 26 games tested.

Given that random cropping was a crucial component in CURL, it is natural to ask — can we achieve the same results with data augmentation alone? In Reinforcement Learning with Augmented Data (RAD), we performed the first extensive study of data augmentation in Deep RL and found that for the DeepMind control benchmark the answer is yes. Data augmentation alone can outperform prior competing methods, match, and sometimes surpass the efficiency of state-based RL. Similar results were also shown in concurrent work – DrQ. 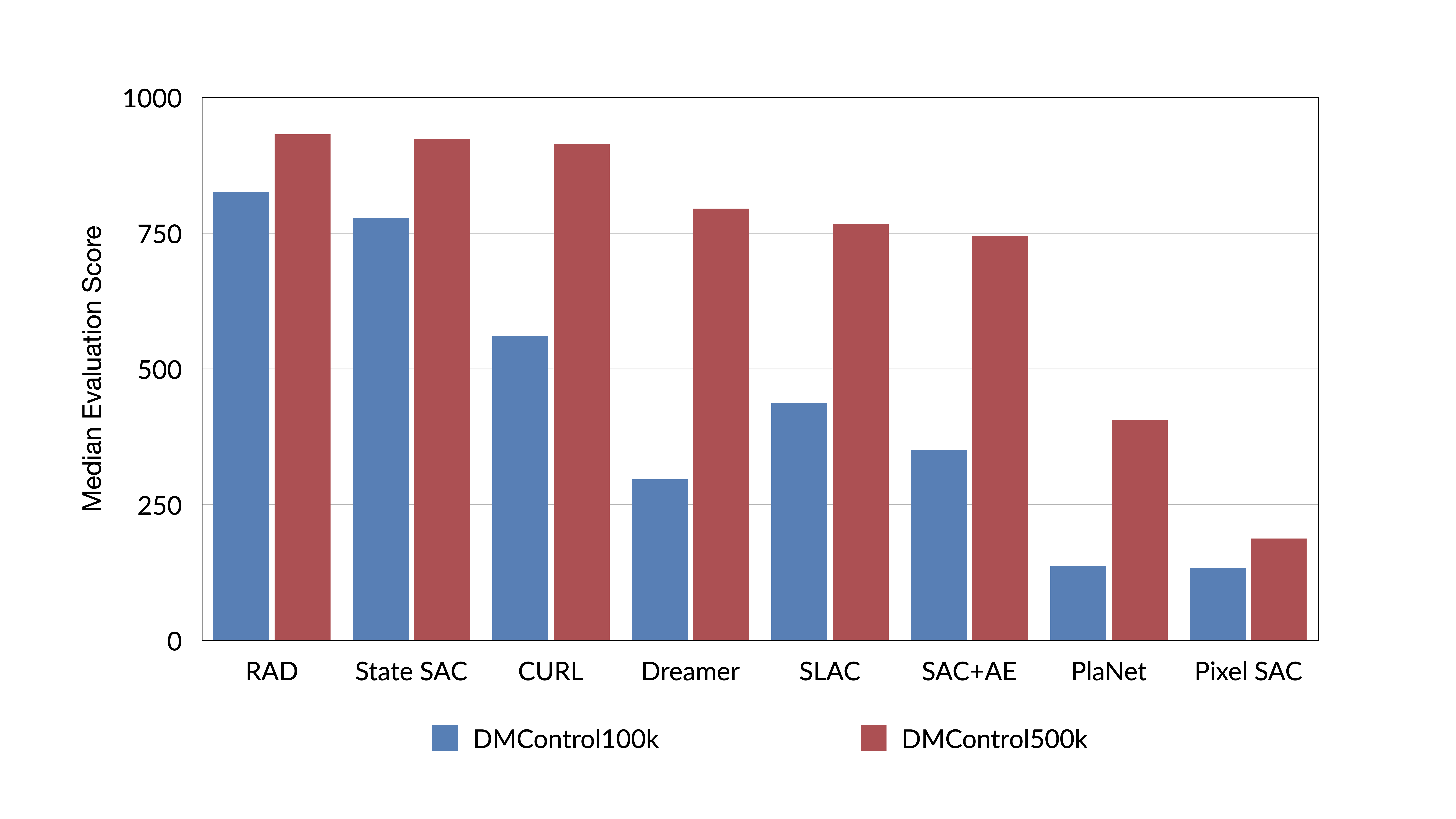 We found that RAD also improves generalization on the ProcGen game suite, showing that data augmentation is not limited to improving data-efficiency but also helps RL methods generalize to test-time environments.

If data augmentation with RL performs so well, do we need unsupervised representation learning? RAD outperforms CURL because it only optimizes for what we care about, which is the task reward. CURL, on the other hand, jointly optimizes the reinforcement and contrastive learning objectives. If the metric
used to evaluate and compare these methods is the score attained on the task at hand, a method that purely focuses on reward optimization is expected to be better as long as it implicitly ensures similarity consistencies on the augmented views.

However, many problems in RL cannot be solved with data augmentations alone. For example, RAD would not be applicable to environments with sparse-rewards or no rewards at all, because it learns similarity consistency implicitly through the observations coupled to a reward signal. On the other hand, the contrastive learning objective in CURL internalizes invariances explicitly and is therefore able to learn semantic representations from high dimensional observations gathered from any rollout regardless of the reward signal. Unsupervised representation learning may therefore be a better fit for real-world tasks, such as robotic manipulation, where the environment reward is more likely to be sparse or absent.