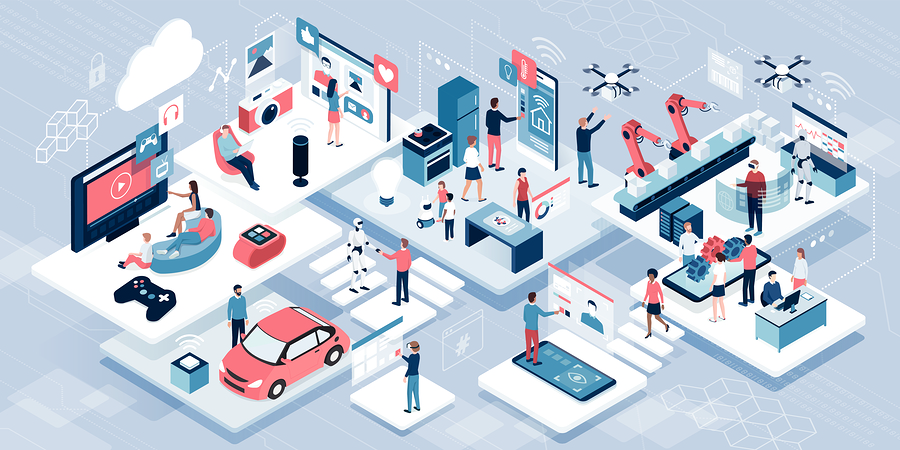 A recent report by the OECD showed that Europe is only capitalising on a fraction (12%) of its digital potential. Most companies limit their digital use to email and internet. Small and Medium Sized Enterprises (SMEs) are particularly slow to integrate digital technologies. The recent Digital Economy and Society Index Report found that “Less than a fifth of companies in the EU-28 are highly digitised“ and that “Use of robots is low on an EU level, with 6.7% of all enterprises using industrial or service robots. The share of large enterprises that use robots is four times higher than the share of SMEs.”

Yet advances in robotics, AI, cloud computing, and big data have the potential to boost productivity and change the industrial landscape. 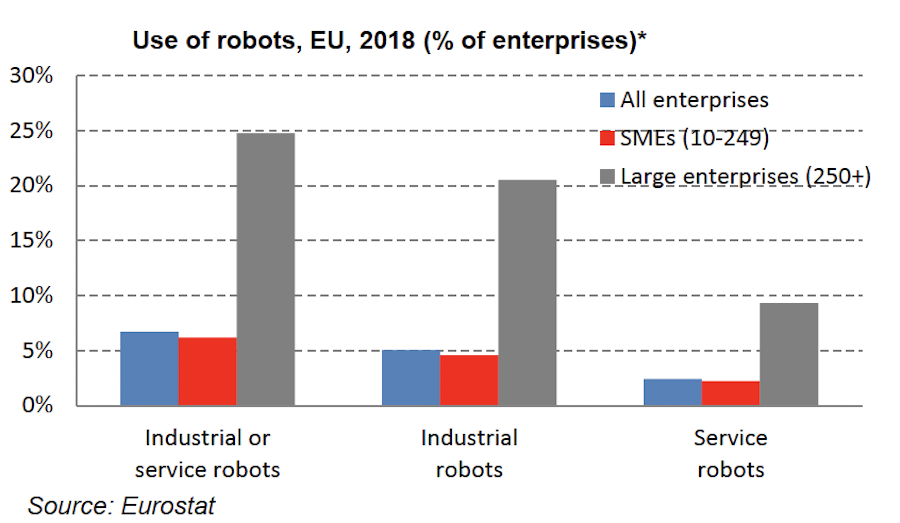 In an effort to increase uptake of digital technologies in companies, the European Commission promised 500M € in 2016, over 5 years, to launch Digital Innovation Hubs (DIHs). DIHs are regional one-stop-shops that help companies access the latest knowledge, expertise, and technology to prototype and test their own digital innovations, network, receive financing advice and market intelligence.

Key to the success of DIHs is to build on core technology infrastructures, so-called Competence Centres (CC), and other existing structures, and link them on a regional level. The idea is that every company should be able to access at least one DIH within their region. This is especially important since most SMEs confess not knowing where to start when it comes to integrating digital technologies into their companies.

“The DIHs funded by the EU Commission can boost digitalisation in Europe in an effective way by supporting both the public sector and SMEs to become more competitive in a global market” says Francesco Ferro, CEO of the Spanish SME PAL Robotics.

The catalogue of Digital Innovation Hubs, hosted by the Joint Research Centre in Sevilla, currently includes over 290 operational hubs across Europe, with 200 more in preparation. The hubs span the full digital landscape, including robotics, artificial intelligence, big data, high-performance computing and cybersecurity, as well as its applications in healthcare, manufacturing, agriculture and food production, maintenance and inspection. 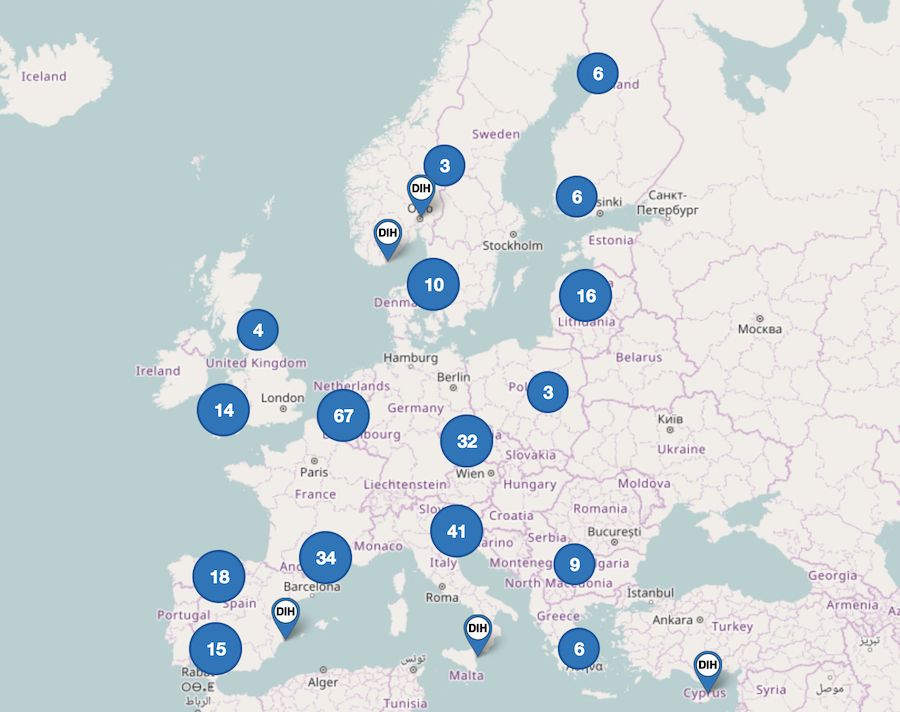 Robotics is central to Europe’s Digital Strategy and 196 of the registered DIHs have identified robotics as an area of expertise. In addition, the European Commission awarded 80M € since 2018 to 5 DIH networks with a robotics focus. Each of these brings together one or two dozen DIHs, with the aim of expanding to even more during the project.

The Horizon 2020 projects Trinity and DIH² focus on Agile production, RIMA promotes the uptake of robotics for inspection and maintenance applications, DIH-HERO facilitates the healthcare robotics sector, and agROBOfood enables the adoption of robotics technologies in the agri-food sector. To coordinate these projects, the Coordination and Support Action (CSA) RODIN started last November with funding of 2M € over five years to cover the whole life-cycle of the network projects. The aim is to present a harmonised interface to the overall landscape of robotics DIHs, coordinate events and calls, share best practice, and connect with similar networks in other areas, such as DIHNET.EU (Next Generation European DIH Network).

DIHNET.EU, the 1M € three-year project launched in November, coordinates the whole network of DIHs in different domains such as robotics, cybersecurity, photonics, advanced manufacturing, artificial intelligence, high-performance-computing, software, big data, agriculture, and more. Think of it as a pan-European network of networks. DIHNET.EU promotes collaboration between DIHs through workshops and events, provides tools and an on-line community platform for DIHs, and is the link to the JRC that maintains the DIH catalogue. The project provides an overview of DIHs to the outside world and helps the European Commission shape DIH-related workshops. To promote the sharing of best practice, DIHNET.EU just launched the Champions Challenge to identify, show and support success stories from mature DIHs that can inspire and guide other DIHs in their developments. 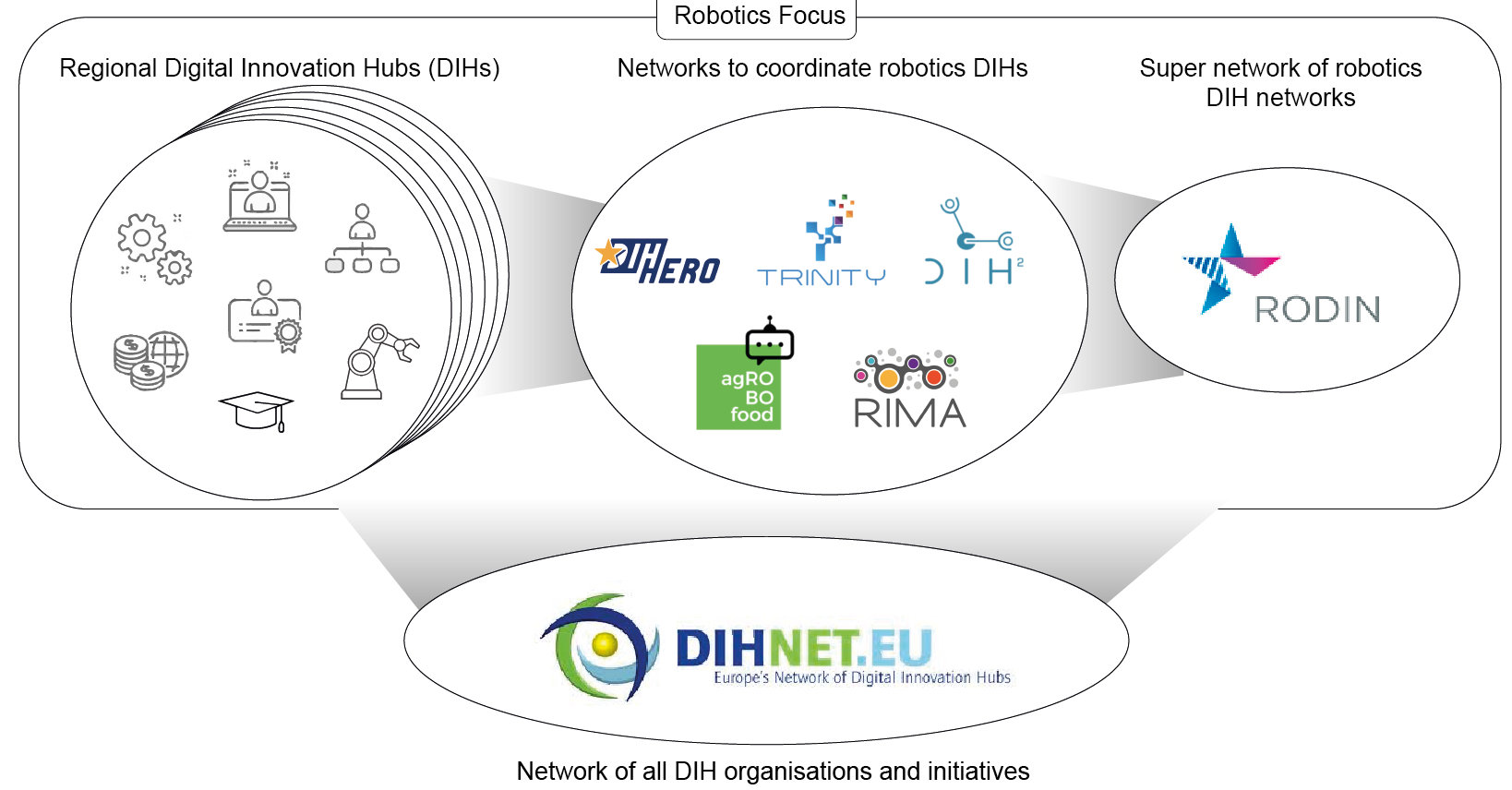 “The DIHNET.EU project is meant to link all relevant initiatives around DIHs together and to create sustainability. Sharing of best practice, creation of awareness and synergies across application sectors, technologies, and regions will help shape a pan-European business ecosystem” says Reinhard Lafrenz, Secretary General of euRobotics.