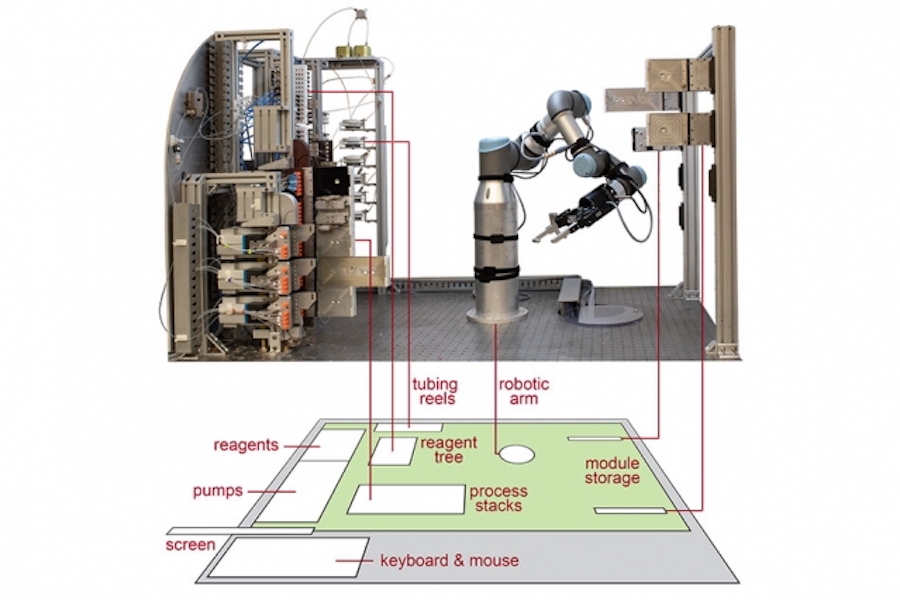 Guided by artificial intelligence and powered by a robotic platform, a system developed by MIT researchers moves a step closer to automating the production of small molecules that could be used in medicine, solar energy, and polymer chemistry.

The system, described in the August 8 issue of Science, could free up bench chemists from a variety of routine and time-consuming tasks, and may suggest possibilities for how to make new molecular compounds, according to the study co-leaders Klavs F. Jensen, the Warren K. Lewis Professor of Chemical Engineering, and Timothy F. Jamison, the Robert R. Taylor Professor of Chemistry and associate provost at MIT.

The technology “has the promise to help people cut out all the tedious parts of molecule building,” including looking up potential reaction pathways and building the components of a molecular assembly line each time a new molecule is produced, says Jensen.

“And as a chemist, it may give you inspirations for new reactions that you hadn’t thought about before,” he adds.

From inspiration to recipe to finished product

The new system combines three main steps. First, software guided by artificial intelligence suggests a route for synthesizing a molecule, then expert chemists review this route and refine it into a chemical “recipe,” and finally the recipe is sent to a robotic platform that automatically assembles the hardware and performs the reactions that build the molecule.

Coley and his colleagues have been working for more than three years to develop the open-source software suite that suggests and prioritizes possible synthesis routes. At the heart of the software are several neural network models, which the researchers trained on millions of previously published chemical reactions drawn from the Reaxys and U.S. Patent and Trademark Office databases. The software uses these data to identify the reaction transformations and conditions that it believes will be suitable for building a new compound.

“It helps makes high-level decisions about what kinds of intermediates and starting materials to use, and then slightly more detailed analyses about what conditions you might want to use and if those reactions are likely to be successful,” says Coley.

“One of the primary motivations behind the design of the software is that it doesn’t just give you suggestions for molecules we know about or reactions we know about,” he notes. “It can generalize to new molecules that have never been made.”

Chemists then review the suggested synthesis routes produced by the software to build a more complete recipe for the target molecule. The chemists sometimes need to perform lab experiments or tinker with reagent concentrations and reaction temperatures, among other changes.

“They take some of the inspiration from the AI and convert that into an executable recipe file, largely because the chemical literature at present does not have enough information to move directly from inspiration to execution on an automated system,” Jamison says.

The final recipe is then loaded on to a platform where a robotic arm assembles modular reactors, separators, and other processing units into a continuous flow path, connecting pumps and lines that bring in the molecular ingredients.

“You load the recipe — that’s what controls the robotic platform — you load the reagents on, and press go, and that allows you to generate the molecule of interest,” says Thomas. “And then when it’s completed, it flushes the system and you can load the next set of reagents and recipe, and allow it to run.”

Unlike the continuous flow system the researchers presented last year, which had to be manually configured after each synthesis, the new system is entirely configured by the robotic platform.

“This gives us the ability to sequence one molecule after another, as well as generate a library of molecules on the system, autonomously,” says Jensen.

The design for the platform, which is about two cubic meters in size — slightly smaller than a standard chemical fume hood — resembles a telephone switchboard and operator system that moves connections between the modules on the platform.

The researchers tested the full system by creating 15 different medicinal small molecules of different synthesis complexity, with processes taking anywhere between two hours for the simplest creations to about 68 hours for manufacturing multiple compounds.

The team synthesized a variety of compounds: aspirin and the antibiotic secnidazole in back-to-back processes; the painkiller lidocaine and the antianxiety drug diazepam in back-to-back processes using a common feedstock of reagents; the blood thinner warfarin and the Parkinson’s disease drug safinamide, to show how the software could design compounds with similar molecular components but differing 3-D structures; and a family of five ACE inhibitor drugs and a family of four nonsteroidal anti-inflammatory drugs.

“We are really trying to close the gap between idea generation from these programs and what it takes to actually run a synthesis,” says Coley. “We hope that next-generation systems will increase further the fraction of time and effort that scientists can focus their efforts on creativity and design.”