How many jobs do robots really replace? 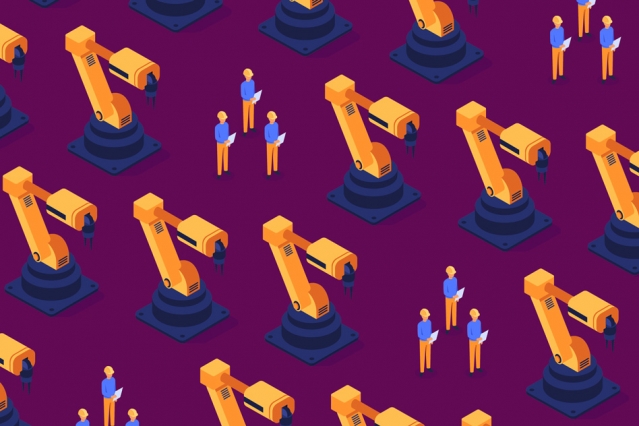 MIT professor Daron Acemoglu is co-author of a new study showing that each robot added to the workforce has the effect of replacing 3.3 jobs across the U.S.
Image: Stock image edited by MIT News

This is part 1 of a three-part series examining the effects of robots and automation on employment, based on new research from economist and Institute Professor Daron Acemoglu.

In many parts of the U.S., robots have been replacing workers over the last few decades. But to what extent, really? Some technologists have forecast that automation will lead to a future without work, while other observers have been more skeptical about such scenarios.

Now a study co-authored by an MIT professor puts firm numbers on the trend, finding a very real impact — although one that falls well short of a robot takeover. The study also finds that in the U.S., the impact of robots varies widely by industry and region, and may play a notable role in exacerbating income inequality.

“We find fairly major negative employment effects,” MIT economist Daron Acemoglu says, although he notes that the impact of the trend can be overstated.

From 1990 to 2007, the study shows, adding one additional robot per 1,000 workers reduced the national employment-to-population ratio by about 0.2 percent, with some areas of the U.S. affected far more than others.

This means each additional robot added in manufacturing replaced about 3.3 workers nationally, on average.

That increased use of robots in the workplace also lowered wages by roughly 0.4 percent during the same time period.

“We find negative wage effects, that workers are losing in terms of real wages in more affected areas, because robots are pretty good at competing against them,” Acemoglu says.

The paper, “Robots and Jobs: Evidence from U.S. Labor Markets,” appears in advance online form in the Journal of Political Economy. The authors are Acemoglu and Pascual Restrepo PhD ’16, an assistant professor of economics at Boston University.

To conduct the study, Acemoglu and Restrepo used data on 19 industries, compiled by the International Federation of Robotics (IFR), a Frankfurt-based industry group that keeps detailed statistics on robot deployments worldwide. The scholars combined that with U.S.-based data on population, employment, business, and wages, from the U.S. Census Bureau, the Bureau of Economic Analysis, and the Bureau of Labor Statistics, among other sources.

The researchers also compared robot deployment in the U.S. to that of other countries, finding it lags behind that of Europe. From 1993 to 2007, U.S. firms actually did introduce almost exactly one new robot per 1,000 workers; in Europe, firms introduced 1.6 new robots per 1,000 workers.

“Even though the U.S. is a technologically very advanced economy, in terms of industrial robots’ production and usage and innovation, it’s behind many other advanced economies,” Acemoglu says.

Across the U.S., the study analyzed the impact of robots in 722 commuting zones in the continental U.S. — essentially metropolitan areas — and found considerable geographic variation in how intensively robots are utilized.

Given industry trends in robot deployment, the area of the country most affected is the seat of the automobile industry. Michigan has the highest concentration of robots in the workplace, with employment in Detroit, Lansing, and Saginaw affected more than anywhere else in the country.

“Different industries have different footprints in different places in the U.S.,” Acemoglu observes. “The place where the robot issue is most apparent is Detroit. Whatever happens to automobile manufacturing has a much greater impact on the Detroit area [than elsewhere].”

In commuting zones where robots were added to the workforce, each robot replaces about 6.6 jobs locally, the researchers found. However, in a subtle twist, adding robots in manufacturing benefits people in other industries and other areas of the country — by lowering the cost of goods, among other things. These national economic benefits are the reason the researchers calculated that adding one robot replaces 3.3 jobs for the country as a whole.

In conducting the study, Acemoglu and Restrepo went to considerable lengths to see if the employment trends in robot-heavy areas might have been caused by other factors, such as trade policy, but they found no complicating empirical effects.

The study does suggest, however, that robots have a direct influence on income inequality. The manufacturing jobs they replace come from parts of the workforce without many other good employment options; as a result, there is a direct connection between automation in robot-using industries and sagging incomes among blue-collar workers.

“There are major distributional implications,” Acemoglu says. When robots are added to manufacturing plants, “The burden falls on the low-skill and especially middle-skill workers. That’s really an important part of our overall research [on robots], that automation actually is a much bigger part of the technological factors that have contributed to rising inequality over the last 30 years.”

So while claims about machines wiping out human work entirely may be overstated, the research by Acemoglu and Restrepo shows that the robot effect is a very real one in manufacturing, with significant social implications.

“It certainly won’t give any support to those who think robots are going to take all of our jobs,” Acemoglu says. “But it does imply that automation is a real force to be grappled with.”