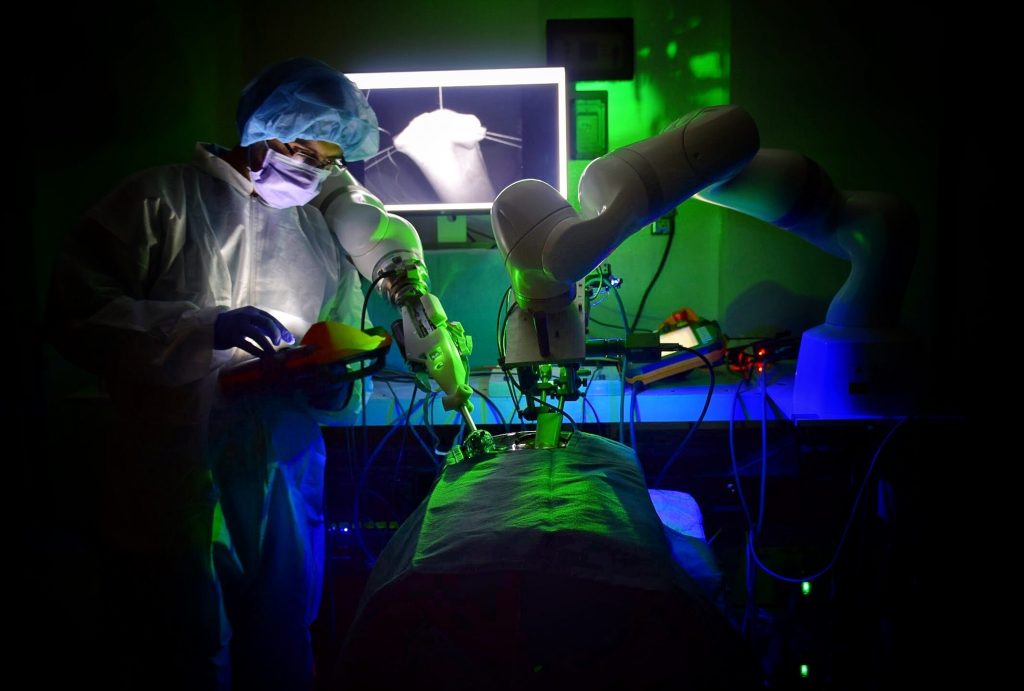 Axel Krieger is the Head of the Intelligent Medical Robotic Systems and Equipment (IMERSE) Lab at Johns Hopkins University, where Justin Opfermann is pursuing his PhD degree. Together with H. Saeidi, M. Kam, S. Wei, S. Leonard , M. H. Hsieh and J. U. Kang, they recently published the paper ‘Autonomous robotic laparoscopic surgery for intestinal anastomosis‘ in Science Robotics. Below, Axel and Justin tell us more about their work, the methodology, and what they are planning next.

What is the topic of the research in your paper?

Our research is focused on the design and evaluation of medical robots for autonomous soft tissue surgeries. In particular, this paper describes a surgical robot and workflow to perform autonomous anastomosis of the small bowel. Performance of the robot is conducted in synthetic tissues against expert surgeons, followed by experiments in pig studies to demonstrate preclinical feasibility of the system and approach.

Could you tell us about the implications of your research and why it is an interesting area for study?

Anastomosis is an essential step to the reconstructive phase of surgery and is performed over a million times each year in the United States alone. Surgical outcomes for patients are highly dependent on the surgeon’s skill, as even a single missed stitch can lead to anastomotic leak and infection in the patient. In laparoscopic surgeries these challenges are even more difficult due to space constraints, tissue motion, and deformations. Robotic anastomosis is one way to ensure that surgical tasks that require high precision and repeatability can be performed with more accuracy and precision in every patient independent of surgeon skill. Already there are autonomous surgical robots for hard tissue surgeries such as bone drilling for hip and knee implants. The Smart Tissue Autonomous Robot (STAR) takes the autonomous robotic skill one step further by performing surgical tasks on soft tissues. This enables a robot to work with a human to complete more complicated surgical tasks where preoperative planning is not possible. We hypothesize that this will result in a democratized surgical approach to patient care with more predictable and consistent patient outcomes.

Could you explain your methodology?

Until this paper, autonomous laparoscopic surgery was not possible in soft tissue due to the unpredictable motions of the tissue and limitations on the size of surgical tools. Performing autonomous surgery required the development of novel suturing tools, imaging systems, and robotic controls to visualize a surgical scene, generate an optimized surgical plan, and then execute that surgical plan with the highest precision. Combining all of these features into a single system is challenging. To accomplish these goals we integrated a robotic suturing tool that simplifies wristed suturing motions to the press of a button, developed a three dimensional endoscopic imaging system based on structured light that was small enough for laparoscopic surgery, and implemented a conditional autonomy control scheme that enables autonomous laparoscopic anastomosis. We evaluated the system against expert surgeons performing end to end anastomosis using either laparoscopic or da Vinci tele-operative techniques on synthetic small bowel across metrics such as consistency of suture spacing and suture bite, stitch hesitancy, and overall surgical time. These experiments were followed by preclinical feasibility tests in porcine small bowel. Limited necropsy was performed after one week to evaluate the quality of the anastomosis and immune response.

What were your main findings?

Comparison studies in synthetic tissues indicated that sutures placed by the STAR system had more consistent spacing and bite depth than those applied by surgeons using either a manual laparoscopic technique or robotic assistance with the da Vinci surgical system. The improved precision afforded by the autonomous approach led to a higher quality anastomosis for the STAR system which was qualitatively verified by laminar four dimension MRI flow fields across the anastomosis. The STAR system completed the anastomosis with a first stitch success rate of 83% which was better than surgeons in either group. Following the ex-vivo tests, STAR performed laparoscopic small bowel anastomosis in four pigs. All animals survived the procedure and had an average weight gain over the 1 week survival period. STAR’s anastomoses had similar burst strength, lumen area reduction, and healing as manually sewn samples, indicating the feasibility of autonomous soft tissue surgeries.

What further work are you planning in this area?

Our group is researching marker-less strategies to track tissue position, motion, and plan surgical tasks without the need for fiducial markers on tissues. The ability to three dimensionally reconstruct the surgical field on a computer and plan surgical tasks without the need for artificial landmarks would simplify autonomous surgical planning and enable collaborative surgery between an autonomous robot and human. Using machine learning and neural networks, we have demonstrated the robot’s ability to identify tissue edges and track natural landmarks. We are planning to implement fail-safe techniques and hope to perform first in human studies in the next few years.