Long-distance robot-assisted heart surgery and beyond 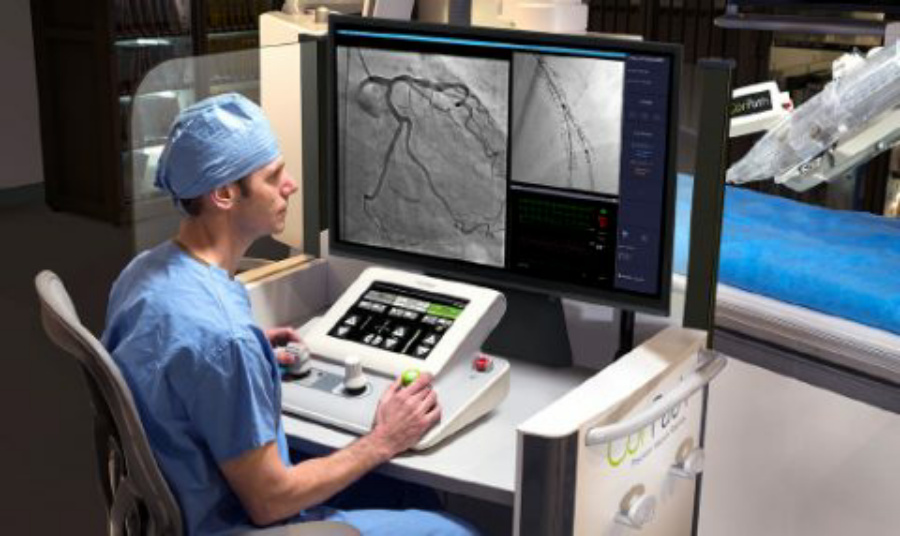 In 2018, five patients at the Apex Heart Institute in Ahmedabad, India, received treatment for coronary artery disease (CAD) the same way 3 million others do each year: a small balloon was inserted into an artery in the heart and inflated, making way for the placement of a stent to keep the vital pathway open.

The procedure, known as percutaneous coronary intervention (PCI), is the standard treatment for atherosclerosis, a common CAD marked by the buildup of plaque inside the arteries and a subsequent restriction of blood flow. Like many patients before them, their operation was assisted by a robot—the CorPath GRX robotic platform from Corindus, A Siemens Healthineers Company.

Yet unlike anyone else before them, these five patients were part of an amazing first: their principal physician was not in the room with them during the procedure. In fact, he was 20 miles away, guiding the robot—performing the operation to perfection—from a remote workstation.

Welcome to the new frontier of telemedicine.

According to the World Health Organization (WHO), cardiovascular disease (CVD) is the number one cause of death globally, claiming 17.9 million lives per year. The impact is greatest in locations lacking ready access to critical care, such as developing countries and rural areas.

The WHO notes that over three-quarters of deaths from CVD occur in low- and middle-income countries. In developed countries, the issue arises in rural communities where smaller hospitals often do not have specialists, such as interventional cardiologists, on staff. It is in these areas where remote solutions like the one Corindus has pioneered offer hope and tantalizing possibilities.

Dr. Tejas Patel performed these remote interventions and wrote about them with his colleagues Sanjay Shah and Samir Pancholy in EClinicalMedicine. According to the article, “The vast majority of patients with CAD or acute coronary syndrome in developing countries have little or no access to immediate interventional therapy. Current robotic technology combined with improvements in network connectivity and operator expertise in R-PCI [robot-assisted PCI] procedures can be employed as a front-line service in regions where such expertise is not available.” The article also noted that the system could be used as a supplemental service to provide expertise to a larger number of patients.

Reaching patients around the world wherever and whenever they need treatment has been on the mind of the Corindus team since the introduction of their CorPath robotic platform. So has physician safety.

While CorPath’s robotic advances have provided physicians with exceptional precision and control during PCI procedures, the system still needed to do more to safeguard physician health—exposure to radiation from imaging techniques used in the procedures was common, as were orthopedic injuries stemming from the necessary heavy protective equipment doctors were forced to wear.

“Sensing an opportunity to increase the safety of surgeons while at the same time addressing the growing global need for innovative telemedicine solutions, Corindus CEO Mark Toland famously told our team that it was time for us to ‘go remote or go home,’” recalls Nicholas Kottenstette, Ph.D., R&D Fellow at Corindus. “This battle cry resonated across the company, forcing us to push the envelope, further evolve the capabilities and possibilities of our CorPath system, and achieve another industry milestone: enabling the first remote robotic-assisted PCI.”

Kottenstette has worked on the robot product line since joining Corindus. But he started his career in a different field. He received his Ph.D. in electrical engineering at Notre Dame, where he designed a framework to control systems over networks, ensuring stability while accounting for time delay and data loss. He then began his career at Vanderbilt University, developing robotic control systems for aircraft using Model-Based Design. It was this work that led to a different type of control system that operated over the network: the surgical robot.

All of that work, which involved Model-Based Design using MATLAB and Simulink, has proven integral to meeting the challenges of developing our precision robotic systems.

To understand the complex workings of the robotic system, it helps to take a basic inventory of its key components. The system comprises two main stations: a bedside unit, the part of the system which allows for device manipulation within the patient, and an interventional cockpit, from which the physician guides the devices during an intervention. 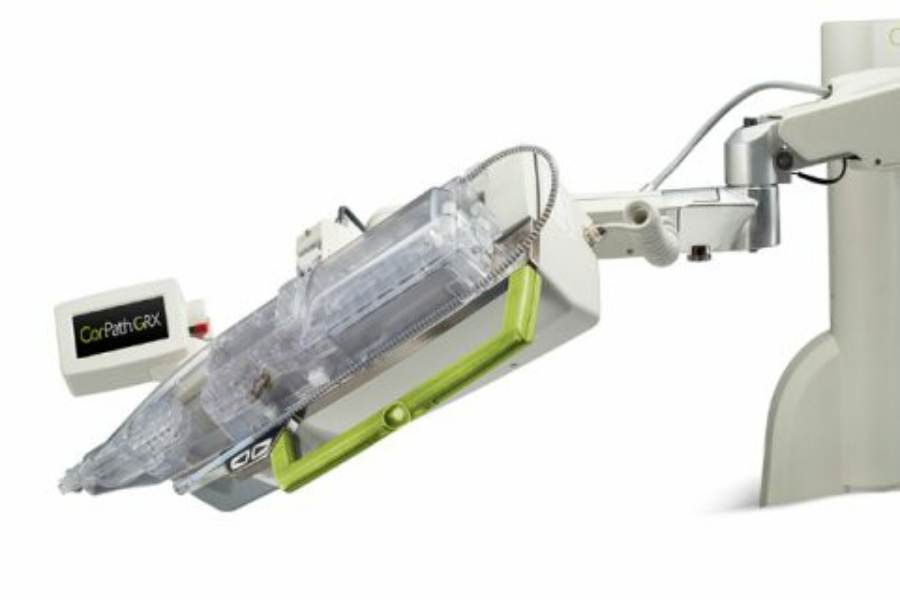 The bedside unit has an extended reach arm and bedside touch screen. This is operated by the scrub staff. Image Credit: Corindus 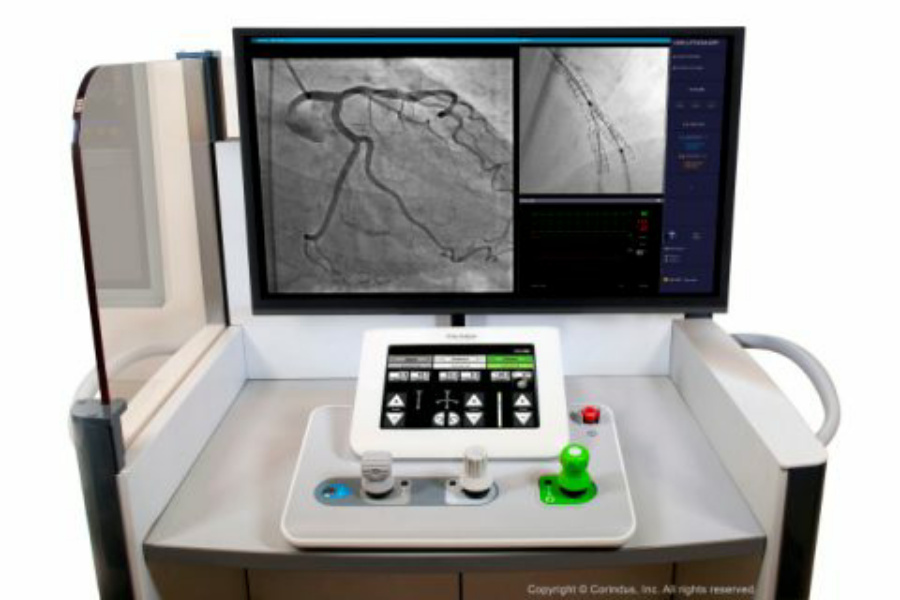 “The robot control substation contains a control computing system, monitors, networking equipment (i.e., connectivity) and a robotic console with three joysticks,” says Dr. Patel. “The monitors display real-time hemodynamic variables and fluoroscopic video, providing the operator enhanced visualization of the PCI procedure. One joystick is for balloon/stent manipulation, one for guidewire manipulation, and the third for guide catheter manipulation.”

A closer look at these two main systems—the bedside unit and interventional cockpit—reveals a collaboration and interdependence essential to the successful performance of the robotic system. Combined, these systems have delivered quantifiable benefits, including increased accuracy in measuring anatomy to determine lesion size and stent length, and increased precision in stent positioning.

Performing an intricate procedure remotely posed significant design challenges, chief among them real-time, end-to-end video capture and processing: physicians may operate less effectively when there is significant lag or latency in the images they see and commands they send over a network. In addition, it is important that the physician is aware of the quality of the network connection, which includes network latencies and received frames of images per second (throughput). The system should limit the physician from operating under poor networking conditions in order to limit risks of patient harm.

To overcome the challenges of real-time systems operations, Kottenstette drew on his track record of innovation using Model-Based Design.

MATLAB, Simulink, and Simulink Real-Time have long been staples of my application-development work on the CorPath system, from embedded motor controls for guiding the robotic arm’s motions, to the way the fluoroscopic images are communicated with the workstations. My team modeled the remote system using Model-Based Design.

That approach has paid dividends. For example, as Corindus began to develop its next generation platform, CorPath GRX, it used universal cameras well before there was real-time support for USB 3.0 devices.

“As we pushed to develop an advanced real-time video capability that didn’t interrupt the physicians’ normal workflow, MathWorks worked hand in hand with us to develop the needed support,” says Kottenstette. “Once we had that, we could compress and decompress images as needed to facilitate their real-time transmission and consumption by the remote operator.”

As for ensuring a dedicated real-time network capability, Corindus used the Speedgoat family of target machines—high-performance computers optimized for specific applications—to execute his system’s mission-critical applications. With a Speedgoat target at the operating site and one at the remote location, where it supported the interventional cockpit, CorPath GRX performed admirably.

Dr. Patel notes in his report, “The remote R-PCI procedure was successful in all aspects. The remote interventionalist operator rated the functionality of the robotic platform and the network connection system as equivalent to an in-lab manual PCI procedure with no significant procedural delays or technical difficulties. This was corroborated by the 53 millisecond mean delay recorded by the network, which is most likely imperceptible to the operator.” 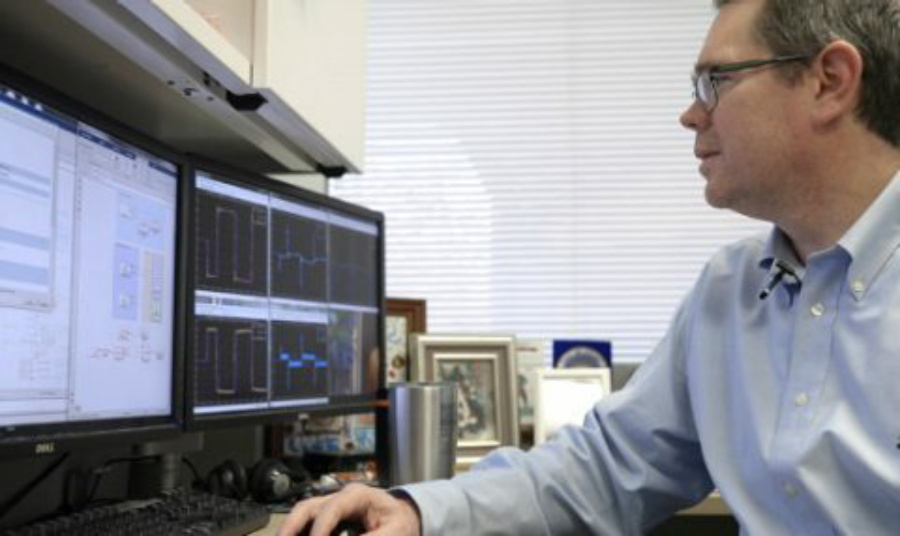 Encouraged by its breakthrough success with remote R-PCI procedures, Corindus is continuing to think big—big enough to lead a telemedicine revolution in brain treatment as well.

“Every second matters for stroke victims, just as it does for those who suffer heart attacks,” says Kottenstette. “Our ability to treat patients wherever they are with our remote robotic protocol is the wave of the future and is driving our next set of CorPath innovations as we take on strokes, which is the number one cause of disability and fifth leading cause of death in the U.S.”

MathWorks is an American privately held corporation that specializes in mathematical computing software. Its major products include MATLAB and Simulink, which support data analysis and simulation.

MathWorks is an American privately held corporation that specializes in mathematical computing software. Its major products include MATLAB and Simulink, which support data analysis and simulation.