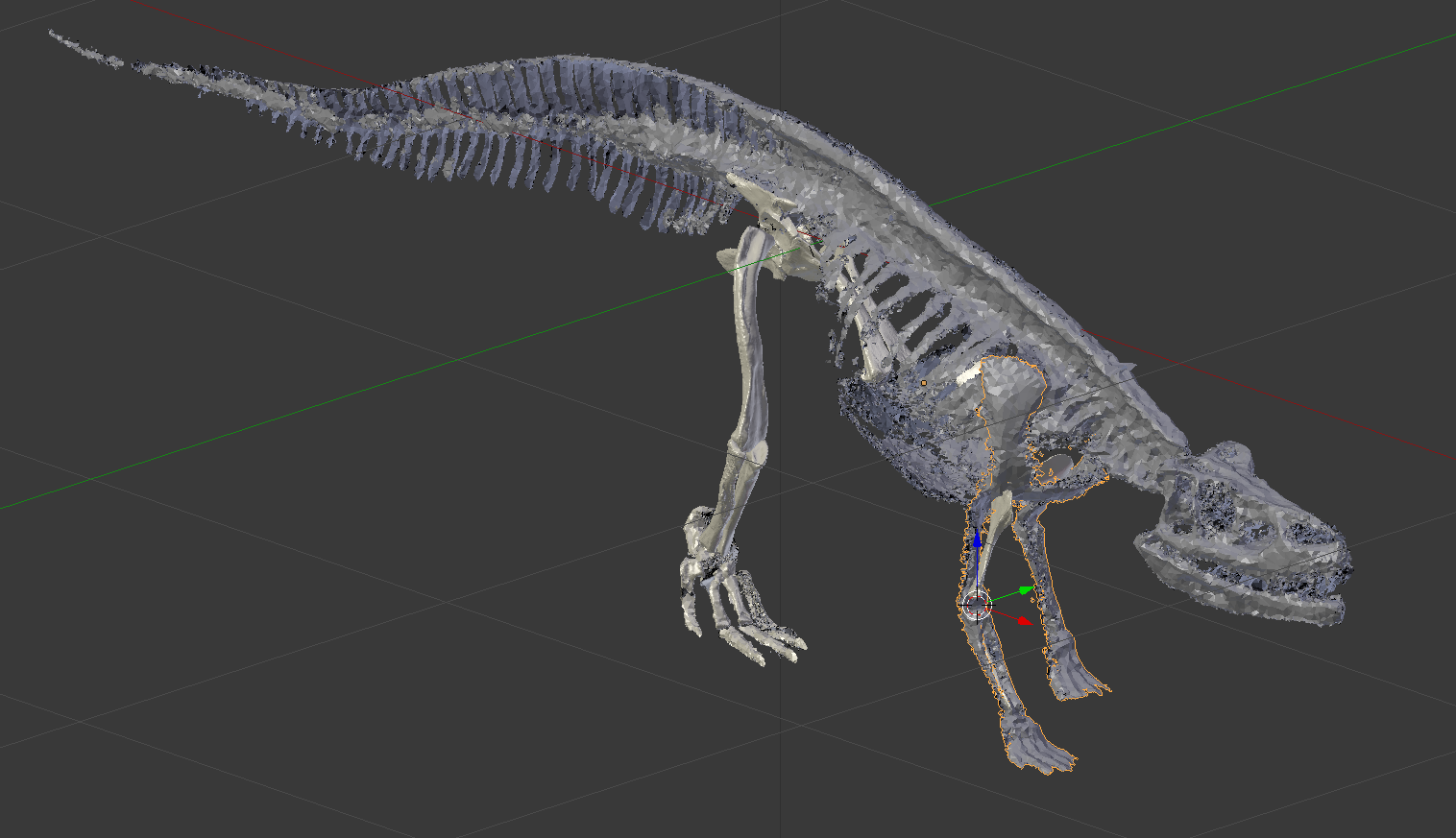 Researchers are using computer simulations to estimate how 11 different species of extinct archosaurs such as the batrachotomus might have moved. Image credit: John Hutchinson


From about 245 to 66 million years ago, dinosaurs roamed the Earth. Although well-preserved skeletons give us a good idea of what they looked like, the way their limbs worked remains a bigger mystery. But computer simulations may soon provide a realistic glimpse into how some species moved and inform work in fields such as robotics, prosthetics and architecture.

John Hutchinson, a professor of evolutionary biomechanics from the Royal Veterinary College in Hertfordshire, UK, and his colleagues are investigating the locomotion of the earliest, small dinosaurs, as part of the five-year-long Dawndinos project which began in 2016.

‘These dinosaurs have been hugely neglected,’ Prof. Hutchinson said. ‘People – including me – have mostly been studying the celebrity dinosaurs like T. rex.’

About 225 million years ago, during the late Triassic period, these small dinosaurs were in the minority, whereas the bigger crocodile-like animals that lived alongside them were more numerous and diverse. Dinosaurs somehow went on to thrive while most other animals from that period became extinct.

Compared to their quadrupedal, heavy-built contemporaries, what stands out about these early dinosaurs is that they had an erect posture and could, at least intermittently, walk on two limbs. One theory is that their style of locomotion gave them a survival edge.

‘The idea of this project is to test that idea,’ Prof. Hutchinson said.

The team has started to develop computer simulations to estimate how 11 different species of extinct archosaurs – the group of animals that includes crocodiles, birds, their relatives and dinosaurs – might have moved. They will focus on five different types of motion: walking, running, turning, jumping and standing.

To test whether their simulations are accurate, the researchers plan to give the same treatment to their living relatives – crocodiles and birds – as well. They will then compare the results to actual measurements of motion to determine how good their computer models of extinct animals are.

‘It will be the first time we ground-truth (test with empirical evidence) these methods very rigorously with the best possible data we can get,’ Prof. Hutchinson said.

So far, they’ve modelled the movement of a Mussaurus – an early cousin of giant plant-eating sauropod dinosaurs such as Brontosaurus. The Mussaurus was much smaller and researchers wanted to see whether it moved on four legs like its larger relatives. The first reconstructions of the animal had it on four legs because it had quite big arms, said Prof. Hutchinson.

Using scans of well-preserved fossils from Argentina, they were able to produce new models of its movement. Prof. Hutchinson and his team found that it was in fact bipedal. It couldn’t have walked on four legs since the palms of its front limbs faced inwards and the forearm joints weren’t capable of rotating downwards. Therefore, it wouldn’t have been able to plant its front legs on the ground.

‘It wasn’t until we put the bones together in a 3D environment and tried playing with their movements that it became clear to us that this wasn’t an animal with very mobile arms and hands,’ Prof. Hutchinson said.

After modelling the large forearm of the Mussaurus, the Dawndinos team realised that it could not be used for walking. Video courtesy: John Hutchinson

The simulations produced during the project could be useful for zoologists. But they could have less obvious applications too, for example, helping to improve how robots move, according to Prof. Hutchinson.

Accurate models are needed to replicate the motion of animals, which robotics researchers often take inspiration from. Mimicking a crocodile, for example, could be of interest to create a robot that can both swim and walk on land.

Prof. Hutchinson also regularly gets contacted by film and documentary makers who are interested in using his simulations to create realistic animations. ‘It’s hard to make bigger, or unusual, animals move correctly if the physics isn’t right,’ Prof. Hutchinson said.

Understanding the locomotion of the very largest dinosaurs is the aim of a project being undertaken by paleobiology researcher Alexandra Houssaye and her colleagues from France’s National Centre for Scientific Research and the National Museum of Natural History in Paris. Through their Gravibone project, which began last year, they want to pin down the limb bone adaptations that allow large animals to carry a heavy skeleton.

‘We really want to understand what (bone features) are linked to being massive,’ Dr Houssaye said.

So far, research has shown that the long bones in the limbs of bigger animals are more robust than those of smaller animals. But this general trend has only been superficially observed. The outer and inner bone structures have adapted over time to help support animals’ weight. For example, whereas smaller terrestrial animals have hollow limb bones, massive ones like elephants, rhinos and hippos have connective tissue in the middle.

Among the largest animals and their ancestors there are also other differences. The limb bones of modern rhinos, for example, are short and heavy. But their prehistoric relatives called Indricotherium, the largest land mammal that ever lived, had a less stocky skeleton. ‘It’s interesting to see that the biggest didn’t have the most massive (frame),’ Dr Houssaye said.

The team is studying both living and extinct animals, focussing on elephants, rhinos, hippos, prehistoric mammals and dinosaurs such as sauropods – a group that includes the biggest terrestrial animals of all time.

So far, they have compared the ankle bones of horses, tapirs, rhinos and fossils of rhinos’ ancestors. They found that for animals of the same mass there were differences depending on if they were short and stout or had longer limbs. In less stocky animals, the two ankle bones tended to be more distinct whereas they were more strongly connected in those that were massively built, probably to reinforce the articulation.

‘It’s not only the mass (of the animal) but how the mass is distributed on the body,’ said Dr Houssaye. ‘For us that was interesting.’

Their next step will be to scan different limb bones and analyse their inner structure. They will also use 3D modelling to figure out how much weight different parts of the bones can handle in different spots, for example.

The results from the project could help make more efficient prosthetics for people and animals, Dr Houssaye said. Designers will be able to better understand how different features of limb bones, such as thickness and orientation, relate to their strength, enabling them to create materials that are lighter but more resistant.

Similarly, Dr Houssaye has also had interest from the construction industry which is looking for new types of materials and more effective building techniques. Pillars supporting heavy buildings, for example, could be made using less material by improving their inner structure instead.

‘How a skeleton adapts (to heavy weight) has implications for construction,’ Dr Houssaye said. ‘(Architects) are trying to create structures that are able to support heavy weight.’

The research in this article was funded by the European Research Council. If you liked this article, please consider sharing it on social media.