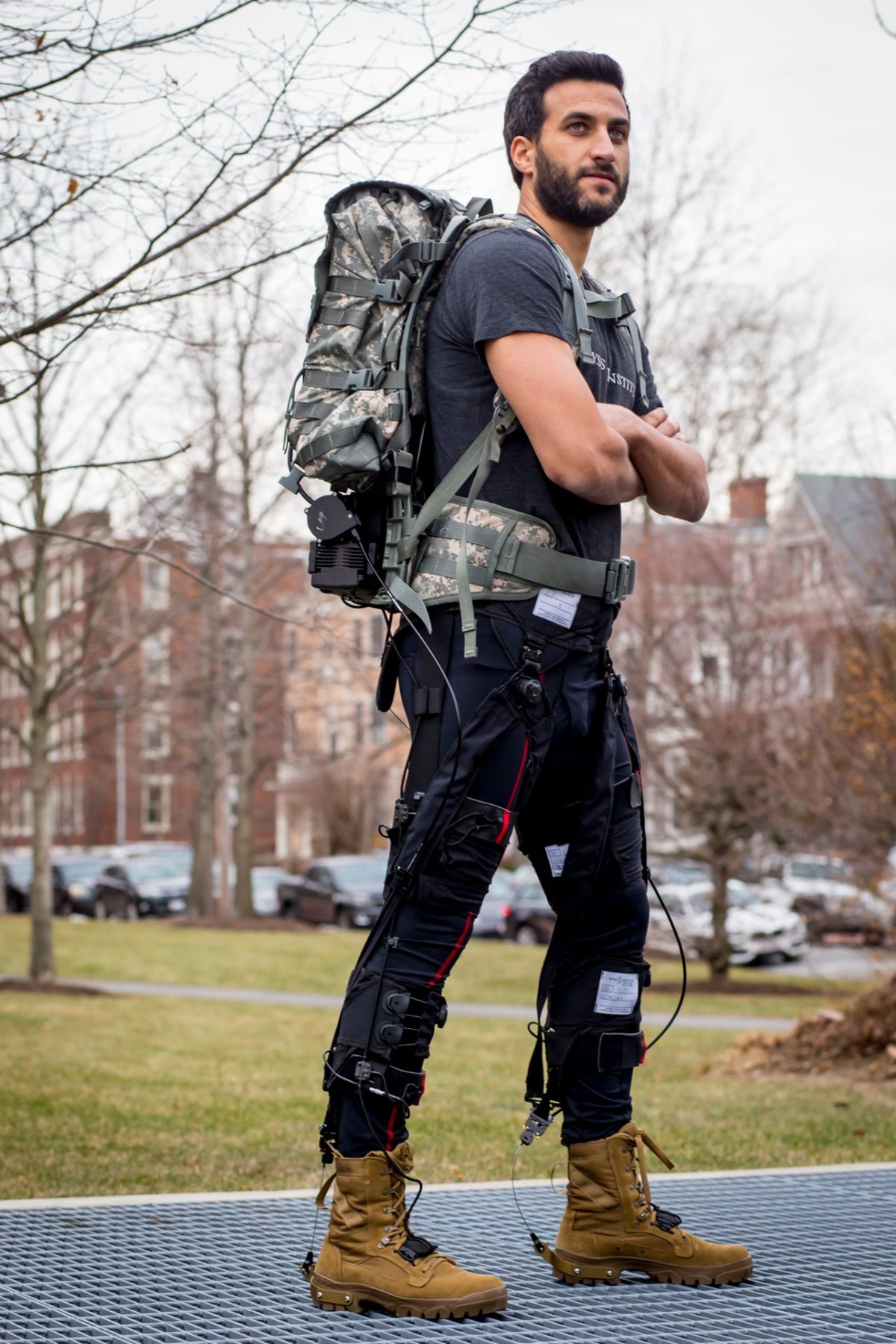 The multi-joint soft exosuit consists of textile apparel components worn at the waist, thighs and calves that guide mechanical forces from an optimized mobile actuation system attached to a rucksack via cables to the ankle and hip joints. In addition, a new tuning method helps personalize the exosuit’s effects to wearers’ specific gaits. Credit: Harvard Biodesign Lab


In the future, smart textile-based soft robotic exosuits could be worn by soldiers, fire fighters and rescue workers to help them traverse difficult terrain and arrive fresh at their destinations so that they can perform their respective tasks more effectively. They could also become a powerful means to enhance mobility and quality of living for people suffering from neurodegenerative disorders and for the elderly.

Conor Walsh’s team at the Wyss Institute for Biologically Inspired Engineering at Harvard University and the Harvard John A. Paulson School of Engineering and Applied Sciences (SEAS) has been at the forefront of developing different soft wearable robotic devices that support mobility by applying mechanical forces to critical joints of the body, including at the ankle or hip joints, or in the case of a multi-joint soft exosuit both. Because of its potential for relieving overburdened solders in the field, the Defense Advanced Research Projects Agency (DARPA) funded the team’s efforts as part of its former Warrior Web program.

While the researchers have demonstrated that lab-based versions of soft exosuits can provide clear benefits to wearers, allowing them to spend less energy while walking and running, there remains a need for fully wearable exosuits that are suitable for use in the real world.

Now, in a study reported in the proceedings of the 2018 IEEE International Conference on Robotics and Automation (ICRA), the team presented their latest generation of a mobile multi-joint exosuit, which has been improved on all fronts and tested in the field through long marches over uneven terrain. Using the same exosuit in a second study published in the Journal of NeuroEngineering and Rehabilitation (JNER), the researchers developed an automatic tuning method to customize its assistance based on how an individual’s body is responding to it, and demonstrated significant energy savings.

The multi-joint soft exosuit consists of textile apparel components worn at the waist, thighs, and calves. Through an optimized mobile actuation system worn near the waist and integrated into a military rucksack, mechanical forces are transmitted via cables that are guided through the exosuit’s soft components to ankle and hip joints. This way, the exosuit adds power to the ankles and hips to assist with leg movements during the walking cycle.

“We have updated all components in this new version of the multi-joint soft exosuit: the apparel is more user-friendly, easy to put on and accommodating to different body shapes; the actuation is more robust, lighter, quieter and smaller; and the control system allows us to apply forces to hips and ankles more robustly and consistently,” said David Perry, a co-author of the ICRA study and a Staff Engineer on Walsh’s team. As part of the DARPA program, the exosuit was field-tested in Aberdeen, MD, in collaboration with the Army Research Labs, where soldiers walked through a 12-mile cross-country course.

“We previously demonstrated that it is possible to use online optimization methods that by quantifying energy savings in the lab automatically individualize control parameters across different wearers. However, we needed a means to tune control parameters quickly and efficiently to the different gaits of soldiers at the Army outside a laboratory,” said Walsh, Ph.D., Core Faculty member of the Wyss Institute, the John L. Loeb Associate Professor of Engineering and Applied Sciences at SEAS, and Founder of the Harvard Biodesign Lab.

In the JNER study, the team presented a suitable new tuning method that uses exosuit sensors to optimize the positive power delivered at the ankle joints. When a wearer begins walking, the system measures the power and gradually adjusts controller parameters until it finds those that maximize the exosuit’s effects based on the wearer’s individual gait mechanics. The method can be used as a proxy measure for elaborate energy measurements.

“We evaluated the metabolic parameters in the seven study participants wearing exosuits that underwent the tuning process and found that the method reduced the metabolic cost of walking by about 14.8% compared to walking without the device and by about 22% compared to walking with the device unpowered,” said Sangjun Lee, the first author of both studies and a Graduate Student with Walsh at SEAS.

“These studies represent the exciting culmination of our DARPA-funded efforts. We are now continuing to optimize the technology for specific uses in the Army where dynamic movements are important; and we are exploring it for assisting workers in factories performing strenuous physical tasks,” said Walsh. “In addition, the field has recognized there is still a lot to understand on the basic science of co-adaptation of humans and wearable robots. Future co-optimization strategies and new training approaches could help further enhance individualization effects and enable wearers that initially respond poorly to exosuits to adapt to them as well and benefit from their assistance”.

“This research marks an important point in the Wyss Institute’s Bioinspired Soft Robotics Initiative and its development of soft exosuits in that it opens a path on which robotic devices could be adopted and personalized in real world scenarios by healthy and disabled wearers,” said Wyss Institute Founding Director Donald Ingber, M.D., Ph.D., who is also the Judah Folkman Professor of Vascular Biology at HMS and the Vascular Biology Program at Boston Children’s Hospital, and Professor of Bioengineering at SEAS.