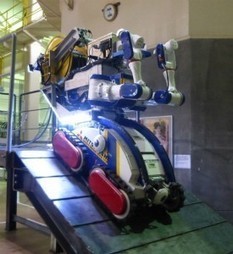 “An advanced remote-controlled robot capable of assessing its surroundings in detail and designed to help decommission reactors at the disaster-stricken Fukushima No. 1 nuclear plant is set to start its performance trials next month.

Plant operator Tokyo Electric Power Co. (TEPCO) is set to confirm the operational abilities of the robot, equipped with cameras with a 360-degree view and lasers capable of mapping the surroundings in 3D, before using it for decontamination work.”