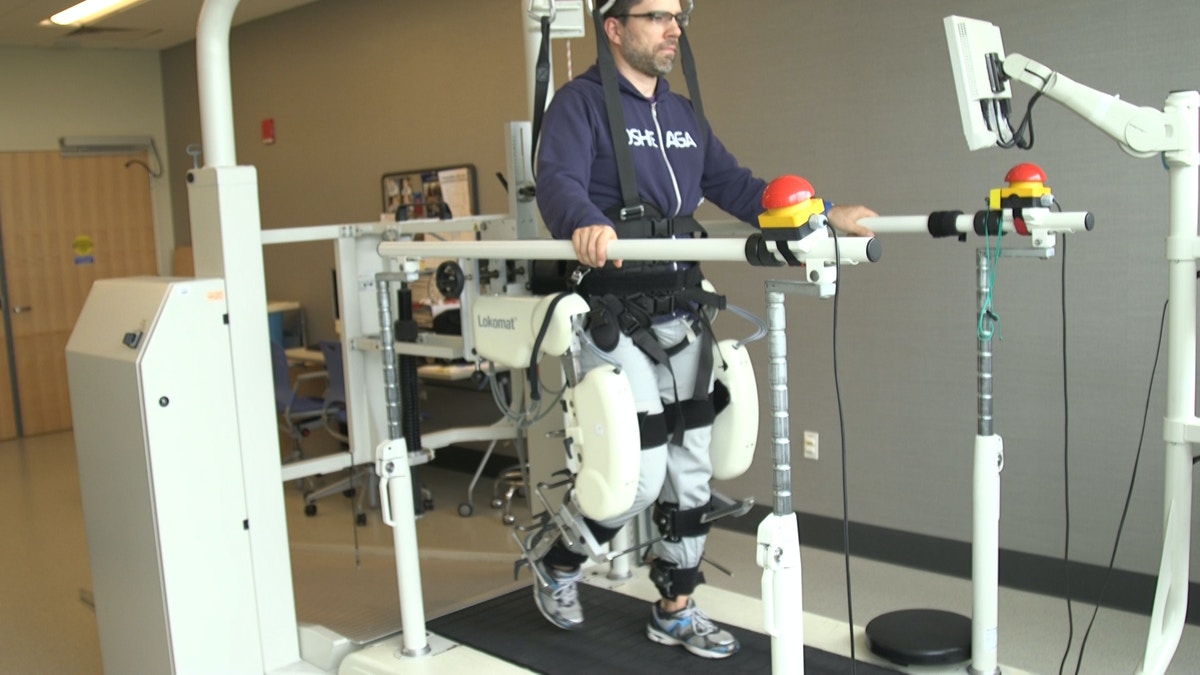 Using a robot to disrupt the gait cycle of participants, researchers discovered that feedforward mechanisms controlled by the cerebellum and feedback mechanisms controlled at the spinal level determine how the nervous system responds to robot-induced changes in step length. Credit: Wyss Institute at Harvard University


Many of us aren’t spending much time outside lately, but there are still many obstacles for us to navigate as we walk around: the edge of the coffee table, small children, the family dog. How do our brains adjust to changes in our walking strides? Researchers at the Wyss Institute for Biologically Inspired Engineering at Harvard University and the Motion Analysis Laboratory at Spaulding Rehabilitation Hospital used robots to try to answer that question, and discovered that mechanisms in both the cerebellum and the spinal cord determine how the nervous system responds to robot-induced changes in step length. The new study is published in the latest issue of Scientific Reports, and points the way toward improving robot-based physical rehabilitation programs for patients.

“Our understanding of the neural mechanisms underlying locomotor adaptation is still limited. Specifically, how behavioral, functional, and physiological processes work in concert to achieve adaptation during locomotion has remained elusive to date,” said Paolo Bonato, Ph.D., an Associate Faculty member of the Wyss Institute and Director of the Spaulding Motion Analysis Lab who led the study. “Our goal is to create a better understanding of this process and hence develop more effective clinical interventions.”

For the study, the team used a robot to induce two opposite unilateral mechanical perturbations to human subjects as they were walking that affected their step length over multiple gait cycles. Electrical signals recorded from muscles were collected and analyzed to determine how muscle synergies (the activation of a group of muscles to create a specific movement) change in response to perturbation. The results revealed a combination of feedforward control signals coming from the cerebellum and feedback-driven control signals arising in the spinal cord during adaptation. The relative side-specific contributions of the two processes to motor-output adjustments, however, depended on which type of perturbation was delivered. Overall, the observations provide evidence that, in humans, both descending and afferent drives project onto the same spinal interneuronal networks that encode locomotor muscle synergies.

These results mirror previous observations from animal studies, strongly suggesting the presence of a defined population of spinal interneurons regulating muscle coordination that can be accessed by both cortical and afferent drives in humans. “Our team hopes to build on this work to develop new approaches to the design of robot-assisted gait rehabilitation procedures targeting specific descending- and afferent-driven responses in muscle synergies in the coming year,” said Bonato.