The fifth Annual Robot Film Festival takes place in Pittsburgh on Saturday, 7 November 2015, at Row House Cinema. Pittsburgh loves robots so much that I like to think of it as a little island of Japan in the center of our country. The full-day festival, taking place for the first time in this city, will celebrate local robotics innovation and creativity with the theme Robots at Work. The festival explores the various roles of robot workers –as  innovators, replacements, creative collaborators, and extensions of ourselves.

Meet Baymax! Or at least the research that inspired Baymax’s creation. The festival is on the one year anniversary of the Big Hero Six release date. Baymax’s design was inspired by the local Carnegie Mellon researcher Chris Atkenson’s investigations into inflatable robots. To celebrate, we will welcome a locally crafted Baymaxter – a mashup of an inflatable Baymax with the Rethink Robotic’s Baxter platform used as a robotic exoskeleton. They’re trying to build Baymax for real!

For the first time ever, the festival will also feature a RFF, Kids Edition! with film screenings, activities, and robot costume contest open to all ages. Participants will meet local robots, like the Triceratops robot from Birdbrain Technologies and dress up as robots thanks to the robot costuming elements from Assemble Pittsburgh.

The afternoon film screenings will open with a Robot Comedy performance by Ginger the robot (my protégée). We’re dividing the films to explore concepts of automation and autonomy — where robots follow and break our machine stereotypes. In the automation section, we consider robots who do tasks instead of us (playing ping pong, tossing Frisbees), for us (shaving us in the shower, caring for our needs), or in our reflection (dancing, ultra-realistic humanoids). The old-fashioned assumption is that if we push robots too far, everything will go wrong, as in this modular robotics video featured at the event

In a society where we’re joined at the hip with our cellphones, I think the world is ready for more optimistic endings. Our second set of films push past robot stereotypes, and expand our expectations. Autonomy introduces the possibility of robots that may surprise us (playfully, creatively), decide their own directives and desires (seeking to assist birds rather than people, helping a plant) or be more than utilitarian (engaging us in addition to achieving objectives). We cannot predict the future, but with reflection and positive storytelling, perhaps we can craft it. At our festival, robots will always get free admission. As for the rest of you: 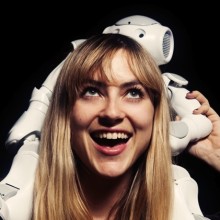