Real robots: Out of the labs and into our lives

Every week, robots are making 60,000 food deliveries to patients in 150 hospitals across the United States. A lovable robotic baby seal is transforming the lives of hundreds of individuals suffering from dementia in Denmark. For thousands of small business owners in manufacturing and assembly, a $20,000 robot is a welcome competitive edge after years of offshoring. And a self-driving car that has logged 100,000 miles could be commercially available in five years.

A robotics conference has never been so energizing: three days of talks and demonstrations that collectively signal to a usually cautious robotics community, ‘it’s time to change the world’. 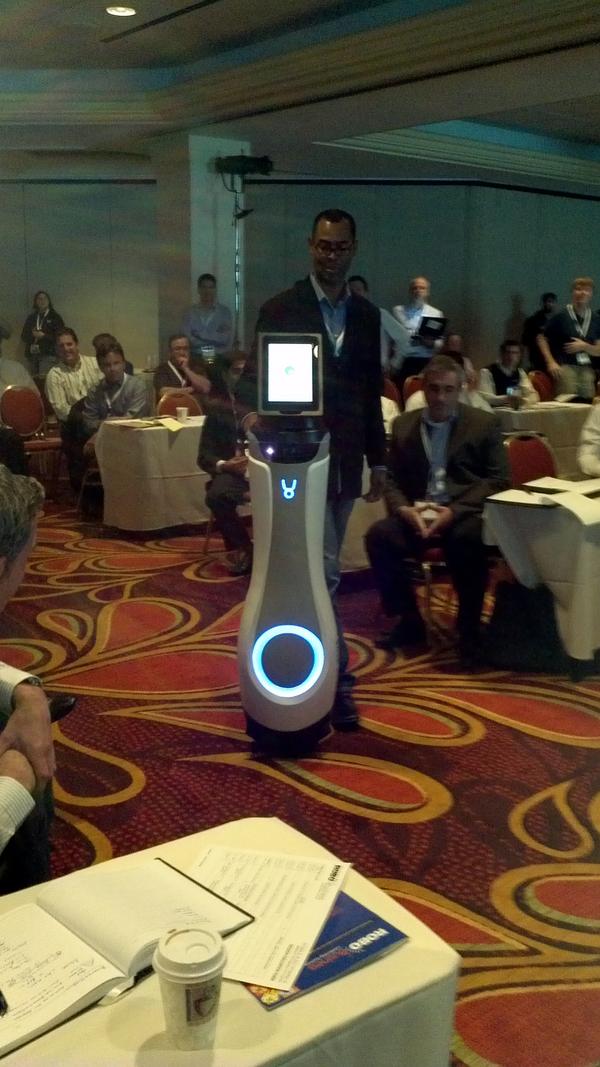 That was RoboBusiness 2012 — for me, at least. Four-hundred robotics researchers, entrepreneurs, business managers, sales professionals, and analysts descending on a hotel in Downtown Pittsburgh certainly had their own intentions for attending the event, but for me it showed that robotics technology is capable of turning into really great products and successful businesses today, and not just for military and assembly line applications.

If, for a moment, you’re staring at your roomba puttering along your floor with a knack for failing to complete a seemingly simple task while longing for the false promises of a personal robotic butler, please bare with me. Let’s break down the key drivers and enablers that have led me to such an optimistic conclusion:

1)   Open platforms and systems integration
For a long time, most robotics researchers and developers created custom hardware and/or software for each new experiment or product, which required a lot of upfront investment just to pretty much reinvent the wheel. Someone interested in building a remote telepresence robot needed to think about motor control, chassis design, sensor interfaces and signal conditioning, power, processing, communications, and user interfaces. That’s not the case anymore, as previous articles here have discussed. Open source software such as Linux, ROS, OpenCV, and PCL have contributed to a coalescence of practices that are speeding up system development and furthering scientific research at a fascinating rate. Readily available platforms and components like Arduino, Turtlebot, Kinect, PR2, Pioneer, and NAO are doing their part on the hardware side, allowing researchers to build on and validate each other’s results. ROS was a primary topic of discussion in at least three talks at RoboBusiness, while nearly every robot or manipulator arm in the showcase featured ROS compatibility. That didn’t exist only a few years ago. In fact, one talk from CoroWare President Lloyd Spencer focused exclusively on open platforms, and Clearpath Robotics is successfully delivering ROS-running robots to real-world customers.

2)   Workforce Development
For two decades, robotics competitions at all levels of education have inspired students to become engineers. Whether it’s FIRST, VEX, BEST, Botball, the Trinity fire-fighting contest, or the various events funded by professional societies like AUVSI and IEEE, we have a generation of competition graduates who are ambassadors for robotics technology with practical expectations. They are developers, researchers, and future adopters, and that cannot be undervalued. In terms of curriculum and institutionalization within the United States, we are furthering change with efforts like Project Lead the Way that, according to Robotics Education & Competition Foundation Chairman Joe Astroth at RoboBusiness, is serving 5,000 schools and 500,000 students. Three leading universities have robotics Ph.D. programs and dozens more have M.S. and B.S. degrees, which is not an easy task for schools that tend to think along departmental and disciplinary lines. As we move forward, this new workforce with unique talents will infuse existing products and technologies with robotic elements like computer vision and autonomous navigation. Additionally, they’ll be buoyed by the country’s renewed focus on entrepreneurship and maker culture, and follow dreams for new systems borne out of their competition events and formal studies.

3)   Unmanned systems success
As I noted in my report from this year’s AUVSI Unmanned Systems conference, the market for UAVs and UGVs in defense and surveillance applications is incredibly strong. Not a week goes by without hearing a story of how a teleoperated robot on the ground saved a soldier’s or police officer’s life. These systems are delivering results (in addition to raising ethical and legal questions), and a growing ecosystem of component suppliers will continue to benefit commercial robotics applications. Furthermore, advancements in reliable communications and robust system construction will translate to better commercial products.

4) Social and Demographic changes
Several talks at RoboBusiness repeated the same demographic statistics and facts I’ve been hearing at other conferences, reports, blog, and NSF meetings for some time:

These numbers paint a picture of a crippled healthcare system without technological adoption that facilitates longer in-home living and more efficient patient care. In the U.S., Europe, and Japan, demographics are quickly becoming a driver for new businesses and products. For example, iRobot and InTouch Health demonstrated their new RP-VITA product, developed out of a partnership between the two companies. In fact, InTouch CEO Dr. Yulun Wang delivered his entire presentation through the telepresence robot with an impressive video quality through the hotel’s standard WiFi network. Off-site specialists can control the robot through an iPad or PC and simply click on patient locations on a map as the robot autonomously navigates to the bedside.

So that’s where we are right now, a lot of promising drivers and a small but growing number of successful businesses with increasing product adoption. While the technological challenges are immense but generally doable, we must not underestimate the systems problem – the social, cultural, and policy dynamics that can easily hamper a product’s chances.

Consider the story portrayed by two back-to-back talks from Nordic countries: Adam Hagman from Sweden’s Robotdalen partnership, and Claus Risager from the Denmark Technological Institute. Robotdalen has created impressive partnerships between academia and industry to translate research into products and get them to the people who benefit most from functions such as augmented hand gripping. In both Sweden and Denmark the Bestic is a small robotic arm that helps users independently feed themselves, and it has been hugely success in transforming lives at the modest price tag of $4,000.

And then you have Paro, the cute robotic baby seal originally developed in Japan that has benefited hundreds of patients suffering from dementia across Denmark alone. Presenter Claus Risager noted that Denmark was one of the first to make a large purchase of the robots even as it didn’t quite catch on in Japan. Its healthcare system and culture have enabled the robots to serve as pet therapy for dementia patients, oftentimes calming tempers and soothing moods. I met the Paro at RoboBusiness, and it’s freaking adorable. Simple, reliable, and effective – that’s where robotics products are going.

This article first appeared on Robots in DC.