Mike Toscano, the former president of the Association for Unmanned Vehicle Systems International, emphatically declared at the September RobotLab forum that “anyone who claims to know the future of the [robotics] industry is lying, I mean no one could’ve predicted the computing mobile revolution.” These words acted as a guiding principle when walking around RoboBusiness in Silicon Valley last week.

The many keynotes, pitches and exhibits in the Santa Clara Convention Center had the buzz of an industry racing towards mass adoption, similar to the early days of personal computing. The inflection point in the invention that changed the world, the PC, was 1995. During that year, Sun Microsystems released Java to developers with promise of “write once, publish anywhere,” followed weeks later by Microsoft’s consumer software package, Windows ’95. Greater accessibility led to full ubiquity and applications unthinkable by the original engineers. In many ways, the robot market is standing a few years before its own watershed moment. 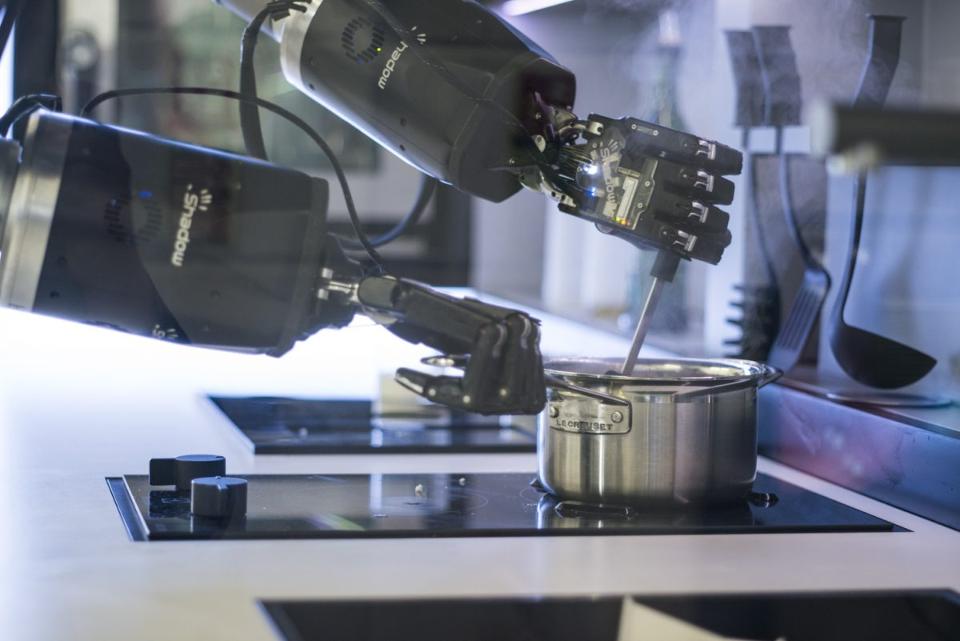 In my last post, I highlighted mechanical musicians and painters, this week it is time to see what is cooking, literally, in robotics. Next year, startup Moley plans to introduce the “first fully-automated and integrated intelligent cooking robot,” priced under $100,000. It already has a slick video that is reminiscent of Lily’s Robotics’ rise to the headlines; needless to say Moley has created quite a stir in the culinary community.

Austin Gresham, executive chef at The Kitchen by Wolfgang Puck is very skeptical, “Professional chefs have to improvise constantly as they prepare dishes. If a recipe says to bake a potato for 25 minutes and the potatoes are more or less dense than the previous batch, then cooking times will vary. I would challenge any machine to make as good a mashed potato (from scratch).” Gresham’s challenge is really the crux of the matter, creativity is driven by human’s desire for food, without taste could a robot chef have the intuition to improvise?

Acting as a judge of the RoboBusiness Pitch Fire Competition, I met entrepreneurs undiscouraged by the market challenges ahead. In addition, throughout my Valley visit, I encountered five startups building commercial and consumer culinary applications. Any time this happens within such a short timespan, I stop and take notice. Automated restaurants seem to be a growing trend across the nation with a handful of upstarts on both coasts. Eatsa is a chain of quinoa-salad restaurants sans cashiers and servers. Customers order via mobile devices or on-site kiosks, picking up their ready dishes through an automated floor-to-ceiling lockbox fixture. However, behind the wall Eatsa has hourly workers manually preparing the salad bowls. Cafe X in San Francisco offers a completely automated experience with a robot-arm barista preparing, brewing and serving espressos, cappuccinos, and Americanos. After raising $5 million from venture investors, Cafe X plans to expand with robot kiosks throughout the city. Probably the most end-to-end automated restaurant concept I visited can be found tucked away on Berkeley University’s Global Campus called BBox by Nourish. BBox is currently running a trial on campus and planning to open its first store next year to conquer the multi-billion dollar breakfast market with egg sandwiches and gourmet coffee (see video below).

According to Nourish’s CEO Greg Becker, BBox will “reengineer the food ecosystem, from farm to mouth.” Henry Hu, Cafe X’s founder, also aims to revolutionize “the supply chain, recipes, maintenance, and customer support.” To date, the most successful robotic concept is Zume Pizza. Founder Julia Collins made headlines last year with her groundbreaking spin on the traditional pizzeria. Today she is taking on Dominos dollar for dollar in the San Francisco area, delivering pies in under 22 minutes. Collins, a former Chief Financial Officer of a Mexican restaurant chain, challenges the food industry, “Why don’t we just re-write the rules— forget about everything we learned about running a restaurant?” Already, Zume is serving hundreds of satisfied customers daily, proving at least with pizza it is possible to innovate.

“We realized we could automate more of the unsafe repetitive tasks of operating a kitchen using flexible, dynamic robots,” explains Collins, who currently employees over 50 human workers that do everything from software engineering to supervising the robots to delivering the pizza. “The humans that work at Zume are making dough from scratch, working with farmers to source products, recipe development—more collaborative, creative human tasks. [We have] lower rent costs because we don’t have a storefront; delivery only and lower labor costs. We reinvest those savings into locally sourced, responsibly farmed food.” Collins also boasts that her human workforce has access to free vision, dental, and health insurance due to the cost savings. 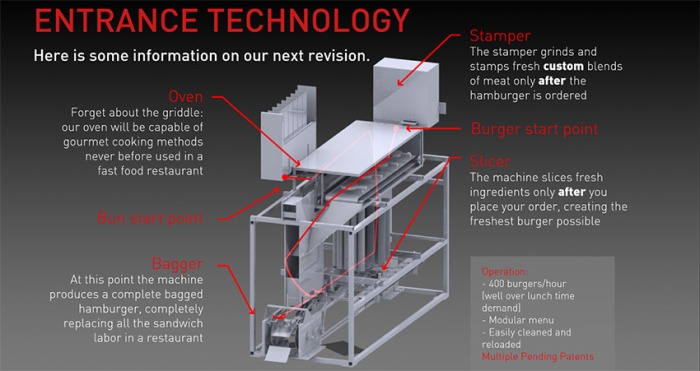 Even Shake Shack could have competition very soon as Google Ventures-backed Momentum Machines is launching an epicurean robot bistro in San Francisco’s chic SoMa district later next year. The machine that has been clocked at 400 burgers an hour, guarantees “to slice toppings, grill a patty, assemble, and bag the burger without any help from humans,” at prices that “everyone can afford.” Momentum’s proposition prompted former McDonald’s CEO Ed Rensi to controversially state that “it’s cheaper to buy a $35,000 robotic arm than it is to hire an employee who’s inefficient making $15 an hour bagging french fries.” Comments like Rensi’s do not further the industry, in fact it probably led to the controversy last month with the launch of Bodega, an automated convenience store that even enraged Lin-Manuel Miranda below.

The bad press was multiplied further by Elizabeth Segran’s article in Fast Company, which read, “the major downside to this concept — should it take off — is that it would put a lot of mom-and-pop stores out of business.” Founder Paul McDonald responded on Medium, “Rather than take away jobs, we hope Bodega will help create them. We see a future where anyone can own and operate a Bodega — delivering relevant items and a great retail experience to places no corner store would ever open.” While Bodega is not exactly a robotic concept, it is similar to the automated marketplace of AmazonGo with 10 computer vision sensors tracking the consumer and inventory management via a mobile checkout app. “We’re shrinking the store and putting it in a box,” said McDonald. The founder has publicly declared war on 7-Eleven’s 5,000 stores, in addition to the 4 million vending machines across the US. Realizing the pressures to innovate, last year 7-Eleven made history with the first drone Slurpee delivery. “Drone delivery is the ultimate convenience for our customers and these efforts create enormous opportunities to redefine convenience,” said Jesus H. Delgado-Jenkins, 7-Eleven EVP and Chief Merchandising Officer. “This delivery marks the first time a retailer has worked with a drone delivery company to transport immediate consumables from store to home. In the future, we plan to make the entire assortment in our stores available for delivery to customers in minutes. Our customers have demanding schedules, are on-the-go 24/7 and turn to us to help navigate the challenges of their daily lives. We look forward to working with Flirtey to deliver to our customers exactly what they need, whenever and wherever they need it.”

As mom & pop stores compete for market share, one wonders with more Kitchen OS concepts if home cooked meals will join the list of outdated cultural trends. Serenti Kitchen in San Francisco plans to bring the Keurig pod revolution to food with its proprietary machine that includes prepared culinary recipe pods that are dropped into a bowl and whipped to perfection by a robotic arm (see above). Serenti Founder Tim Chen was featured last year at the Smart Kitchen Summit, which reconvenes later this month in Seattle. Chen said, “We’re building something that’s quite hard, mechanically, so it’s more from a vision where we wanted to initially develop a machine that could cook, and make cooking easier and automate cooking for the home.” Initially Chen plans to target business catering, “In the near term, we need to focus on placing these machines where there’s the highest amount of density, which is right in the offices,” but long-term Serenti plans to join the appliance counter. Chen explained his inspiration, “Our Mom is a great cook, so they’ve watched her execute the meals. Then realized a lot of it is repetitive, and what recipes are, is essentially just a machine language.” Chen’s observations are shared by many in the IoT and culinary space, as this year’s finalists in the Smart Kitchen Summit include more robotic of inventions, such as Crepe Robot that automatically dispense, cook and flavors France’s favorite snack and GammaChef, a robotic appliance that promises like Serenti to whip up anything in a bowl. Clearly, these inventions will eventually lead to a redesign of the physical home kitchen space that is already crowded with appliances. Some innovators are even using robotic arms tucked away in cabinets and specialized drawers, ovens and refrigeration units that communicate seamlessly to serve up dinner.

The automated kitchen illuminated by Moley and others might be coming sooner than anyone expects; then again it could be a rotten egg. In almost every Sci-Fi movie and television show the kitchen is reduced to a replicator that synthesizes food to the wishes of the user. Three years ago, it was rumored that food-powerhouse Nestle was working on a machine that could produce nutritional supplements on demand, code name Iron Man. While Iron Man has yet to be released to the public, it does illustrate the convergence of 3D printing, robotics and kitchen appliances. While the Consumer Electronics Show is still months away, my appetite has just been whetted for more automated culinary treats, stay tuned!