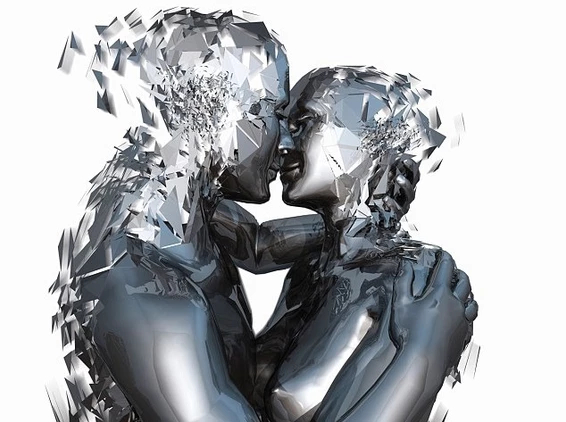 Valentine’s Day is approaching… Do want to sneak in a robot movie to watch on date night? Do you wonder about whether robots and love is possible? Here are five recommendations for sci-fi movies with a discussion of the related real-world robotics science. And remember to check out Learn AI and Human-Robot Interaction from Asimov’s I, Robot Stories– it’s a great primer on social interactions!

Can roboticists make the perfect partner? The original 1975 The Stepford Wives argues “yes”– if your definition of the perfect partner is limited to their appearance and willingness to selflessly perform subservient tasks. The movie, and book it is based on, extrapolated the advances in animatronics at Disney which had opened the Hall of Presidents attraction in 1971 to great acclaim. The assumption was that the hard part in creating a human substitute is creating robots that looked and moved like humans.

Mimicking human movement and facial expressiveness is certainly a challenge for the mechanics and control of a robot, think Hanson’s Sophia and Ishiguro’s Geminoid series of ‘bots. But physical fidelity is not the same as creating the artificial general intelligence needed to avoid the Uncanny Valley or hold a meaningful conversation. See more about the science of making life-like robots here.

Creating the perfect sex partner is a real issue in robotics, with major capital investments in the sexbot industry. This presents real legal and ethical issues. See the RTSF interview with Dr. Van Wynsberghe of the The Foundation for Responsible Robotics here. The FRR has been working to get governments to set policies— see their report Our Sexual Future with Robots. As a woman, I appreciate The Campaign Against Sex Robots which argues that acting out sexual fantasies with sexbots that would make even Takashi Kovacs in Altered Carbon blush have toxic gender, cultural, and mental health implications. Check out the great article on the legal status of sexbots in the US here.

Nominally a horror movie, The Stepford Wives is likely to make you both grateful for whatever positive relationship you have with each other. But get the 1975 original, not the 2004 remake.

Can roboticists make a robot that is better at social interactions, including love, than we are? In the 1987 movie Making Mr. Right, a neuroatypical scientist, played by John Malkovich, builds an android, also played by John Malkovich, that is much more socially competent than he is. A press agent is assigned to handle public relations and teach it to be more emotional. Love ensues.

Social interaction skills are a hot topic in human-robot research, see the large number of papers in venues such as the annual IEEE/ACM Conference on Human-Robot Interaction. But, sadly, most of the touted skills are social engineering tricks that make us think the robots have human skills. Noel Sharkey has a great set of articles on this type of advance/parlor trick in robotics.

Making Mr. Right is a romantic comedy, not a particularly good one, but it *is* the opposite of The Stepford Wives and, well, a romcom. It might inspire some snuggles.

Can’t roboticists make it where we can just download our brains to speed up the process of making robots more human like? In science fiction, that never works and three movies illustrates how it could lead to some tainted love. Saturn 3 and Eve of Destruction, and Demon Seed (FYI, the book is waaay better than the movie) are delightfully, MST3K worthy movies. All three have robot creators who download their brains, apparently missing the class on Freud and the Id. Ooops! Each movie has top actors, including Harvey Keitel, Kirk Douglas, Farrah Fawcett, Gregory Hines, and Julie Christie, who probably regret their decision to participate.

In the real world, downloading probably won’t work either, even if we can edit out our Id. There is some work on transfer learning and brain-computer interfaces but that work is more about motor skills and control, not abstract reasoning and memories.

If togetherness means throwing popcorn at a big screen TV and shouting out derisive comments then any of these three movies are terrific choices to watch with your special someone! My favorite is Saturn 3.

Here’s another link to a slideshow discussing emotions in robots and the general topic page. Whatever you decide to watch, enjoy and keep learning about robots!