Robots can now learn to swarm on the go 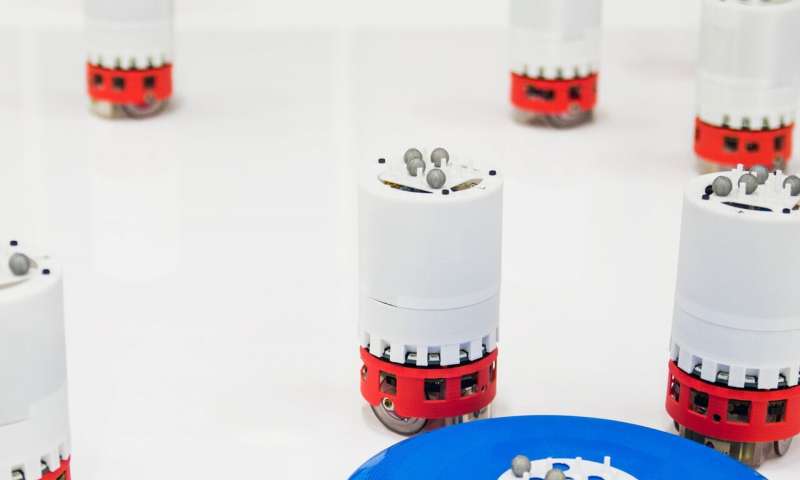 A new generation of swarming robots which can independently learn and evolve new behaviours in the wild is one step closer, thanks to research from the University of Bristol and the University of the West of England (UWE).

Until now, artificial evolution has typically been run on a computer which is external to the swarm, with the best strategy then copied to the robots. However, this approach is limiting as it requires external infrastructure and a laboratory setting.

By using a custom-made swarm of robots with high-processing power embedded within the swarm, the Bristol team were able to discover which rules give rise to desired swarm behaviours. This could lead to robotic swarms which are able to continuously and independently adapt in the wild, to meet the environments and tasks at hand. By making the evolved controllers understandable to humans, the controllers can also be queried, explained and improved.

Lead author, Simon Jones, from the University of Bristol’s Robotics Lab said: “Human-understandable controllers allow us to analyse and verify automatic designs, to ensure safety for deployment in real-world applications.”

Co-led by Dr Sabine Hauert, the engineers took advantage of the recent advances in high performance mobile computing, to build a swarm of robots inspired by those in nature. Their ‘Teraflop Swarm’ has the ability to run the computationally intensive automatic design process entirely within the swarm, freeing it from the constraint of off-line resources. The swarm reaches a high level of performance within just 15 minutes, much faster than previous embodied evolution methods, and with no reliance on external infrastructure.

Dr Hauert, Senior Lecturer in Robotics in the Department of Engineering Mathematics and Bristol Robotics Laboratory (BRL), said: “This is the first step towards robot swarms that automatically discover suitable swarm strategies in the wild”.

“The next step will be to get these robot swarms out of the lab and demonstrate our proposed approach in real-world applications.”

By freeing the swarm of external infrastructure, and by showing that it is possible to analyse, understand and explain the generated controllers, the researchers will move towards the automatic design of swarm controllers in real-world applications.

In the future, starting from scratch, a robot swarm could discover a suitable strategy directly in situ, and change the strategy when the swarm task, or environment changes.

Professor Alan Winfield, BRL and Science Communication Unit, UWE, said: “In many modern AI systems, especially those that employ Deep Learning, it is almost impossible to understand why the system made a particular decision. This lack of transparency can be a real problem if the system makes a bad decision and causes harm. An important advantage of the system described in this paper is that it is transparent: its decision making process is understandable by humans.”