Robots in Depth with Walter Wohlkinger

In this episode of Robots in Depth, Per Sjöborg speaks with Walter Wohlkinger from Blue Danube Robotics about their Airskin, a safety sensor covering robots and machines.

Safety is critical in robotics and especially so in co-robotics where people work closely with robots. Walter tells us how his product, the Airskin, offers a way to add security to systems by adding a sensor to the robot.

We get to hear how the Airskin can be used to control robots by sensing the pressure on different parts of the robot. This is interesting in a co-robot context as it allows for intuitive control of robots. Walter also talks about how the Airskin works by detecting air pressure differences inside the pad and handles puncture detection with a micro pump.

Walter then shares the evolution of trying different production methods before settling on 3D-printing.

The Airskin pads are now mass-manufactured and available as kits for a number of popular robots. Blue Danube Robotics are also working on software that will make it possible for customers to design Airskin pads themselves.

This interview was recorded in 2016. 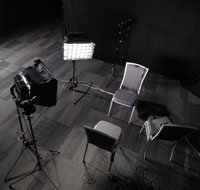 Robots in Depth is a new video series featuring interviews with researchers, entrepreneurs, VC investors, and policy makers in robotics, hosted by Per Sjöborg.

Robots in Depth is a new video series featuring interviews with researchers, entrepreneurs, VC investors, and policy makers in robotics, hosted by Per Sjöborg.