Readers of this blog will know that I’ve become very excited by the potential of robots with simulation-based internal models in recent years. So far we’ve demonstrated their potential in simple ethical robots and as the basis for rational imitation. Our most recent publication instead examines the potential of robots with simulation-based internal models for safety. Of course it’s not hard to see why the ability to model and predict the consequences of both your own and others’ actions can help you to navigate the world more safely than without that ability.

Our paper Simulation-Based Internal Models for Safer Robots demonstrates the value of anticipation in what we call the corridor experiment. Here a smart robot (equipped with a simulation based internal model which we call a consequence engine) must navigate to the end of a corridor while maintaining a safe space around it at all times despite five other robots moving randomly in the corridor – in much the same way you and I might have to navigate down a busy office corridor while others are coming in the opposite direction.

Here is the abstract from our paper:

So, does it work? Thanks to some brilliant experimental work by Christian Blum the answer is a resounding yes. The best way to understand what’s going on is with this wonderful gif animation of one experimental run below. The smart robot (blue) starts at the left and has the goal of safely reaching the right hand end of the corridor – its actual path is also shown in blue. Meanwhile 5 (red) robots are moving randomly (including bouncing off walls) and their actual paths are also shown in red; these robots are equipped only with simple obstacle avoidance behaviours. The larger blue circle shows blue’s ‘attention radius’ – to reduce computational effort blue will only model red robots within this radius. The yellow paths in front of the red robots in blue’s attention radius show blue’s predictions of how those robots will move (taking into account collisions with the corridor walls and with blue and each other). The light blue projection in front of blue shows which of the 34 next possible actions of blue that is internally modelled is actually chosen as the next action (which, as you will see, sometimes includes standing still). 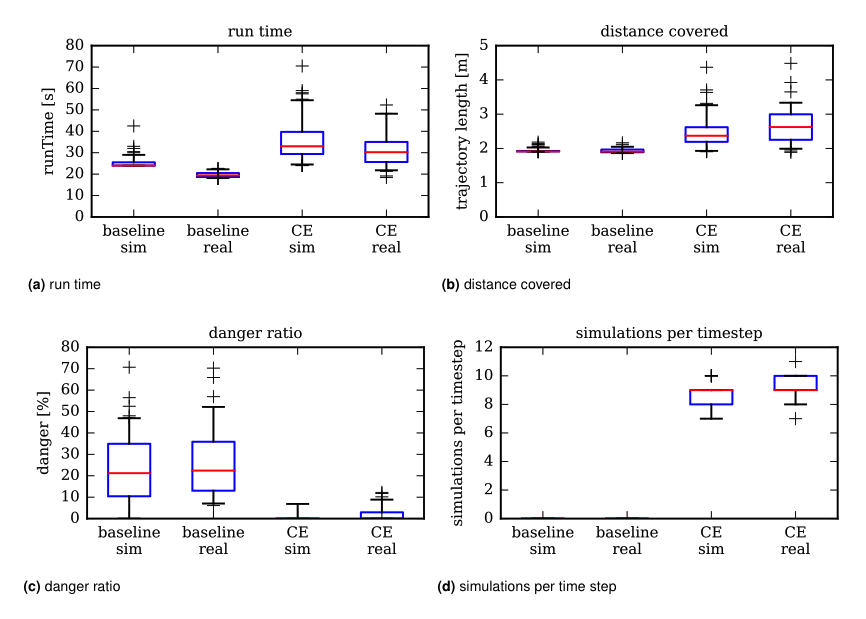 For a relatively small cost in additional run time and distance covered, panels (a) and (b), the danger ratio is very significantly reduced from a mean value of ~20% to a mean value of zero, panel (c). Of course there is a computational cost, and this is reflected in panel (d); the baseline experiment has no consequence engine and hence runs no simulations, whereas the smart robot runs an average of between 8 and 10 simulations per time-step. This is exactly what we would expect: predicting the future clearly incurs a computational overhead.

Acknowledgements:
I am indebted to Christian Blum who programmed the robots, set up the experiment and obtained the results outlined here. Christian lead authored the paper, which was also co-authored by my friend and research collaborator Verena Hafner, who was Christian’s PhD advisor.