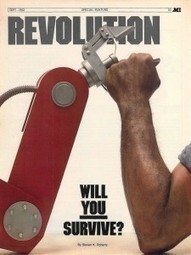 “IF YOU EVER want to get a spirited conversation going, just wander into an employee lunchroom somewhere in Detroit and start singing the praises of industrial robots. After you pick yourself up off the floor, you’ll probably become embroiled in a bitter dispute over worker displacement, Japanese auto imports, productivity and union contract terms.”

Steve Roberts is the quintessential early adopter, in most instances having already moved on to something else by the time the technologies he experiments with become widely accepted.