Using electricity and water, a new kind of motor can slide microrobots into motion 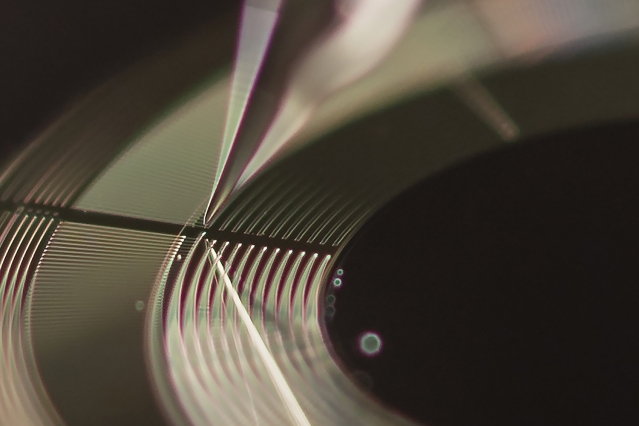 Water droplets are inserted into the microhydraulic actuator, which rotates when voltage is applied to electrodes that pull the droplets in one direction. This disc-shaped actuator’s inner diameter is 5 millimeters.
Photo: Glen Cooper

Look around and you’ll likely see something that runs on an electric motor. Powerful and efficient, they keep much of our world moving, everything from our computers to refrigerators to the automatic windows in our cars. But these qualities change for the worse when such motors are shrunk down to sizes smaller than a cubic centimeter.

“At very small scales, you get a heater instead of a motor,” said Jakub Kedzierski, staff in MIT Lincoln Laboratory’s Chemical, Microsystem, and Nanoscale Technologies Group. Today, no motor exists that is both highly efficient and powerful at microsizes. And that’s a problem, because motors on that scale are needed to put miniaturized systems into motion — microgimbals that can point lasers to a fraction of a degree over thousands of miles, tiny drones that can squeeze into wreckage to find survivors, or even bots that can crawl through the human digestive tract.

To help power systems like these, Kedzierski and his team are making a new type of motor called a microhydraulic actuator. The actuators move with a level of precision, efficiency, and power that has not yet been possible at the microscale. A paper describing this work was published in the September 2018 issue of Science Robotics.

“Think about a droplet of water on a window; the force of gravity distorts it, and it moves down,” said Kedzierski. “Here, we use voltage to cause the distortion, which in turn produces motion.”

The actuator is constructed in two layers. The bottom layer is a sheet of metal with electrodes stamped into it. This layer is covered with a dielectric, an insulator that becomes polarized when an electric field is applied. The top layer is a sheet of polyimide, a strong plastic, that has shallow channels drilled into it. The channels guide the path of dozens of water droplets that are applied in between the two layers and are aligned with the electrodes. To hold off evaporation, the water is premixed with a solution of lithium chloride, which depresses the water’s vapor pressure enough for the micrometer-sized droplets to last for months. The droplets keep their rounded shape (instead of being squashed between the layers) due to their surface tension and relatively small size.

The actuator comes to life when voltage is applied to the electrodes, though not to all of them at once. It’s done in a cycle of turning on two electrodes per droplet at a time. With no voltage, a single water droplet rests neutrally on two electrodes, 1 and 2. But apply a voltage to electrodes 2 and 3, and suddenly the droplet is deformed, stretching to touch the energized electrode 3 and pulling off of electrode 1.

This horizontal force in one droplet isn’t enough to move the actuator. But with this voltage cycle being applied in unison to the electrodes underneath every drop in the array, the entire polyimide layer slides over to appease the drops’ attraction to the energized electrodes. Keep cycling the voltage through, and droplets continue to walk over the electrodes and the layer continues to slide over; turn the voltage off, and the actuator stops in its tracks. The voltage, then, becomes a powerful tool to precisely control the actuator’s movement.

But how does the actuator stand up against other types of motors? The two metrics to measure performance are power density, or the amount of power the motor produces in relation to its weight, and efficiency, or the measure of wasted energy. One of best electric motors in terms of efficiency and power density is the motor of the Tesla Model S sedan. When the team tested the microhydraulic actuators, they found them to be just behind the Model S’s power density (at 0.93 kilowatt per kilogram) and efficiency output (at 60 percent efficient at maximum power density). They widely exceeded piezoelectric actuators and other types of microactuators.

“We’re excited because we are meeting that benchmark, and we are still improving as we scale to smaller sizes,” Kedzierski said. The actuators improve at smaller sizes because surface tension remains the same regardless of the water droplet size — and smaller droplets make room for even more droplets to squeeze in and exert their horizontal force on the actuator. “Power density just shoots up. It’s like having a rope whose strength doesn’t weaken as it gets thinner,” he added.

The latest actuator, the one edging close to the Model S, had a separation of 48 micrometers between droplets. The team is now shrinking that down to 30 micrometers. They project that, at that scale, the actuator will match the Tesla Model S in power density, and, at 15 micrometers, eclipse it.

Scaling the actuators down is just one part of the equation. The other aspect the team is actively working on is 3-D integration. Right now, a single actuator is a two-layer system, thinner than a plastic bag and flexible like one too. They want to stack the actuators in a scaffold-like system that can move in three dimensions.

Kedzierski envisions such a system mimicking our bodies’ muscle matrix, the network of tissues that allow our muscles to achieve instantaneous, powerful, and flexible motion. Ten times more powerful than muscle, the actuators were inspired by muscle in many ways, from their flexibility and lightness to their composition of fluid and solid components.

And just as muscle is an excellent actuator at the scale of an ant or an elephant, these microhydraulic actuators, too, could have a powerful impact not just at the microscale, but at the macro.

“One might imagine,” said Eric Holihan, who has been assembling and testing the actuators, “the technology being applied to exoskeletons,” built with the actuators working as lifelike muscle, configured into flexible joints instead of gears. Or an aircraft wing could shapeshift on electrical command, with thousands of actuators sliding past each other to change the wing’s aerodynamic form.

“Reliability and packaging will continue to be the predominate questions posed to us about the technology until we demonstrate a solution,” said Holihan. “This is something that we look to attack head on in the coming months.”