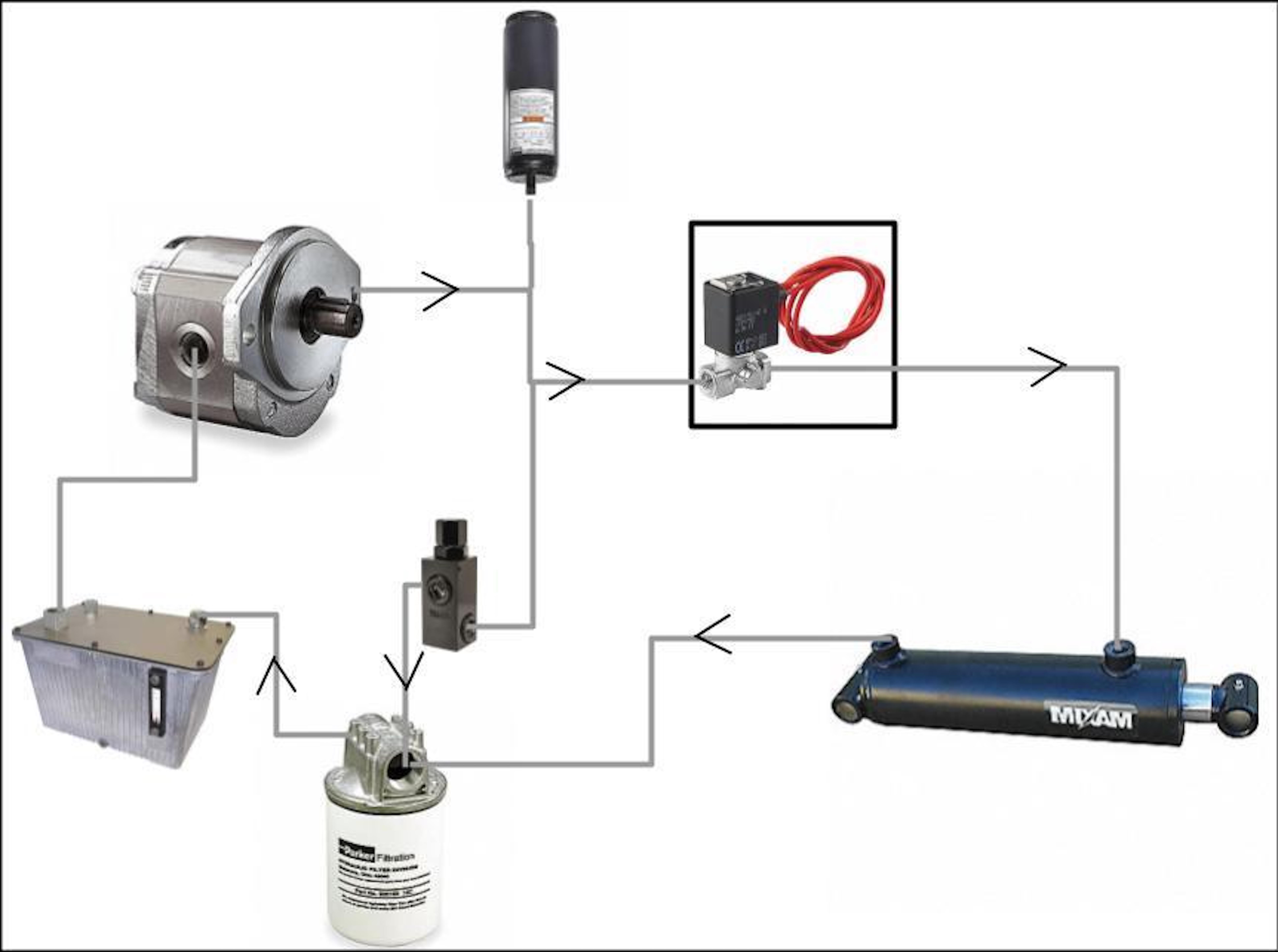 Hydraulics are sometimes looked at as an alternative to electric motors.

Some of the primary reasons for this include:

However there are also some downsides to using hydraulics including:

Hydraulic systems use an incompressible liquid (as opposed to pneumatics that use a compressible gas) to transfer force from one place to another. Since the hydraulic system will be a closed system (ignore relief valves for now) when you apply a force to one end of the system that force is transferred to another part of that system. By manipulating the volume of fluid in different parts of the system you can change the forces in different parts of the system (Remember Pascal’s Law from high school??).

So here are some of the basic components used (or needed) to develop a hydraulic system.

The pump is the heart of your hydraulic system. The pump controls the flow and pressure of the hydraulic fluid in your system that is used for moving the actuators.

We know what the pump is, but you need a way to “power” the pump so that it can pump the hydraulic fluid. Generally the way you power the pump is by connecting it to an electric motor or gas/diesel engine.

Continuing the analogy where the pump is the heart, the hydraulic fluid is the blood of the system. The fluid is what is used to transfer the pressure from the pump to the motor.

These are the arteries and veins of the system that allows for the transfer of hydraulic fluid.

The actuator is generally the reason we are designing this hydraulic system. The motor is essentially the same as the pump; however instead of going from a mechanical input to generating the pressure, the motor converts the pressure into mechanical motion.

Actuators can come in the form of linear motion (referred to as a hydraulic cylinder) or rotary motion motors.

For rotary motors there are generally 3 connections on the motor.

Depending on the motor you can either only use A as the fluid input and B as the fluid output and the motor only spins in one direction. Or some motors can spin in either direction based on if A or B is used as the input or output of the hydraulic fluid.

The drain line is used so when the system is turned off, the fluid has a way to get out of the motor (to deal with internal leakage and to not blow out seals). In some motors the drain line is connected to one of the A or B lines. Also their are sometimes multiple drain lines so that you can route the hydraulic hoses from different locations.

Note: While the pump and motor are basically the same component. You usually can not switch their role due to how they are designed to handle pressure and the pumps usually not being backdrivable.

There are some actuators that are designed to be leakless and hold the fluid and pressure (using valves) so that the force from the actuator is held even without the pump. For example these are used in things like automobile carrying trucks that need to stack cars for transport.

This is essentially a bucket that holds the fluid. They are usually a little fancier so that they have over pressure relief valves, lids, filters, etc..

The reservoir is also often a place where the hydraulic fluid can cool down if it is getting hot within the system. As the fluid gets hotter it can get thinner which can result in increased wear of your motor and pump.

Keeps your hydraulic fluid clean before going back to the reservoir. Kind of like a persons kidneys.

Valves are things that open and close to allow the control of fluid. These can be controlled by hand (ie. manual), or more often my some other means.

There are many types of valves, I will detail a few below.

These are a type of valve that can be inline to allow the flow of hydraulic fluid in only one direction.

These are a type of valve that automatically opens (And lets fluid out) when the pressure gets to high. This is a safety feature so you don’t damage other components and/or cause an explosion.

These are another special class of valve that can use a small pressure to control a much larger pressure valve.

You need to have sensors (with a gauge or computer output) to measure the pressure and/or flow-rate so you know how the system is operating and if it is operating how you expect it to operate.

The accumulator is essentially just a tank that holds fluid under pressure that has its own pressure source. This is used to help smooth out the pressure and take any sudden loads from the motor by having this pressure reserve. This is almost like how capacitors are used in electrical power circuits.

The pressure source in the accumulator is often a weight, springs, or a gas.

There will often be a check valve to make sure the fluid in the accumulator does not go back to the pump.

I am not an expert on hydraulic systems. But I hope this quick introduction helps people. Liked it? Take a second to support me on Patreon! This post appeared first on Robots For Roboticists.