A Frank Review of the movie ‘Robot & Frank’

My friends have been kidding me for months about the movie Robot & Frank (because my name is Frank, I’ve got gray hair, and I’m way into robots — I research, edit and publish The Robot Report and this blog). I have a Photoshop’d poster with my picture instead of Frank’s since, as news of the movie trickled out, they likened me to the crotchety character played by Frank Langella.

Finally, a few days ago, a group of us went to see it and, although it was sad and sweet, and generally a fun and entertaining movie to watch, it was a disappointment to me on many levels.

The story is about an older guy living alone in a rural area. His son drives a long distance to check up on him once a week and the visits aren’t pleasant. His daughter is off in some foreign land taking photos. His ex-wife is long gone. Frank is grumpy, slovenly and abusive except — with the local librarian whom he likes.

The story brightens when the son gives Frank a robot to help take care of him. It is purposed to lead him away from his curmudgeon state (which we later learn is dementia) toward a more healthy life. Frank, who at first hates the idea, finds that the robot is trainable and can do some things better than he can, like pick a lock or crack the combination on a safe. This excites him to once again do what he used to do: be a jewel thief. It’s a mundane Robin Hood type plot but the two principal actors (Frank Langella and Susan Sarandon) make it a better film because they played their roles so convincingly. I don’t want to tell more of the story because the movie is worth seeing. 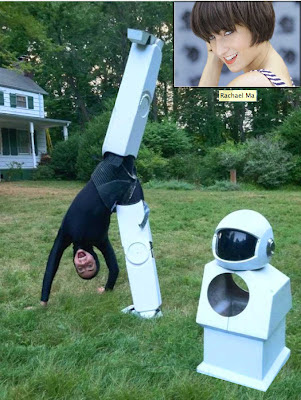 From a robot enthusiast’s point of view, however, the movie left a lot to be desired. First, and I hate to break this to you, the robot wasn’t a robot after all. It may have looked like Honda’s Asimo, but it was really Rachael Ma dressed up in a robot costume made by a Hollywood effects company (Altrerian). She walked and moved just like Asimo and moved her head empathically during periods of dialogue but it wasn’t even a speaking part for her; a male actor read the lines that were the robot’s voice.

Regarding the robot’s voice, the director ended up printing out all of the robot lines in sequence and just having Peter Sarsgaard read them straight through without watching the scenes. It yielded the best balance and consistency for their goal of robot-like speech. If it ended up sounding a little inhuman, that was fine.

The real issues about ethical, psychological and social concerns of a robot providing assistance and life coaching for a person with serious aging and psychological issues, or about a robot assisting or participating in illegal activities with that person were only lightly touched upon. Instead the issues were defined by the paradigm of living alone or in a residential care facility.

When asked by a reporter from The Christian Science Monitor about the ethical question of having robots take care of the elderly and replace human caregivers, director Jake Schreier replied:

I don’t have an answer for that. I mean, we certainly touch on it. I think the key for [screenplay writer Christopher] Ford and I was to sort of make it … you could call it a “future agnostic” movie. This is in the sense that it’s not saying that robots are going to kill us, and it’s not saying that they’re the answer to all our problems. I think there are some issues with them, and there are some amazing things that they can do—and the future is like that. I think it’s important to not be reflexively afraid of the future, to try to take in what’s coming and try to look at all sides of it and see what the positives and negatives are. Hopefully the film lets you have that distance and form an opinion or let you have your own ideas about it, but it isn’t leading you too strongly down one path or the other.

In another interview that appeared in The Huffington Post, the reporter asked Schreirer and Ford how they decided on the simple design of the robot, who looks a lot like Honda’s walking ASIMO robot, and whether they ever considered other designs that were more futuristic and high tech.

JS: The segment of robot design aimed at elder care seems to be oddly focused on these little white spacemen. It’s not just the ASIMO, Toyota has a similar one too, and there are others. We just felt it made sense to stay in that vein. I think they benefit from their simplicity — it allows us to project more emotion onto them.

CF: The robot always had that kind of design, even from the original short I did in film school. I was taken by the image of this tiny little space suit-looking man walking around through a dusty old cottage. I know Jake always liked that image and it was the kernel that we tried to stay true to when we expanded it into a feature.

At the finish of the movie, as the credits rolled, there were cameo videos running alongside the credits showing many service robots doing bits and pieces of home care or assistive tasks. Some of them were caring for the elderly, or interacting with real people playing chess, or cleaning up and doing various tasks. Each video clip was known to me for its limited present-day capability but hopeful for a more efficient and flexible near-term future similar to the futuristic robot in Robot & Frank