ANDROIDS through the eye of a 19th century wooden camera

Wanda Tuerlinckx and Erwin R. Boer have fused their scientific and photographic interests in robots and traveled the world since 2016 to visit roboticists to discuss and photograph their creations. The resulting set of photographs documents the technical robot revolution that is unfolding before us. The portfolio of photographs below presents the androids from Wanda’s collection of robot photographs.

But first, here’s a note from Erwin R. Boer, a scientist who connects humans and machines using symbiosis facilitating techniques mirrored after the way humans interact with each other in the here and now.

Man has created machines in the form of mechanical humans since antiquity. The sculpted faces of the early automatons gave us a glimpse of the future we currently live in. Today’s machines look like humans, move like humans, talk like humans, and at a rapidly increasing pace even think like humans. We marvel at the technological capabilities of these robots and how they are being integrated into our daily lives. The integration of robots into society requires vast technological advances. Successful interactions and communications with humans takes more than nimble technology and raw artificial intelligence – it requires the robot to have emotional intelligence, exhibiting empathy, compassion, forgiveness, and playfulness. At the same time, we fearfully watch how robots reach human potential. Human like robots come in many incarnations ranging from humanoids that have human forms but their bodies and faces are clearly robotic to androids that look in all aspects like humans and are hard to tell apart from humans. Today most androids act on the edge of the uncanny valley, a valley that reflects the fact that the complex behavior of androids, at times, is highly disturbing to humans; these disturbances are caused by unrealistic humanistic expectations of complete human ability projected onto these highly advanced androids that through interaction often gets broken by sometimes creepy realizations that they are not human. This valley is an extremely delicate space, where human and robot apparently overlap in appearance, movement and speech,. Researchers are working feverishly to remove the uncanny valley and create a flat playing field where robots are capable of producing emotions and become an integral part of society through tranquil harmonious cooperation, servitude and symbiotic interactions with humans.

Imagine seeing yourself in the mirror and then that mirror image takes on a reality that reflects your own and walks away to represent you around the world. This is what Professor Hiroshi Ishiguro envisioned when he created his HI-2 and later in life HI-4 geminoids; these geminoids are life size robotic replicates of himself. He created these geminoids to travel for him to far away conferences so that he could from the comfort of his home or office talk and act through these geminoids to give lectures and make appearances. A geminoid with its human twin offers a perfect test bed to explore the question that has inspired scientists and philosophers through the ages namely: what does it mean to be human? To be human also means to have emotional intelligence and thus to be able to understand emotions.

Humans understand emotions because when we see an emotion it triggers in us the feelings that we have when we produce that emotion and therefore we naturally project our feelings onto robots that are capable of producing emotions. Dr. David Hanson has produced a facial rubber called frubber that is perfectly suited to be pulled on the inside by little actuators as if a muscle underneath the skin contracts. His robots are capable of producing a series of emotions that elicit mirror emotions in us. The child like android Diego-san has been capable of instilling the joys of youth in many humans he interacted with. The emotional riches of Hanson’s androids help to create emotional robots that find tremendous value especially in the medical field where human compassion is critical for healing and where autistics children are benefitting from the unfailing compassion that these androids offer.

Recently, a recipient of the Nobel price of literature, Japanese author Natsume Sōseki (1867- 1916) was reincarnated in the form of his android who will give lectures at the university where professor Sōseki taught back in the 1880s. The fact that Wanda photographed android Sōseki with a camera that was used in Sōseki’s own time to take portraits of notable people creates a loop that not only transcends time but also connects two key industrial revolutions; the industrial revolution around 1900 and the robot revolution around 2000. The connection across a similar time scale is also beautifully embodied in Dr. Hanson’s android Einstein whose clones are currently being used as science teachers in many classrooms and homes around the world. Photography continues to enlighten use through imagery while robots enlighten us through physical embodied actions enriched by intelligent emotional sensitive speech.

Wanda Tuerlinckx is a photographer who connects humans and robots using a 180 year old photographic technique that mirrors how humans connect with each other across the boundaries of time through the soft understanding eye from our great grandfathers who have lived through earlier technological revolutions and presents these new technological marvels in a manner that exudes a comfortable familiarity that instills acceptance. The human element in science imposes its presence nowhere stronger than in the incarnation of a human robot that in many respects is indistinguishable from a human human. More information about Wanda and her work can be found here. You can also see her previous set of robot portraits here. 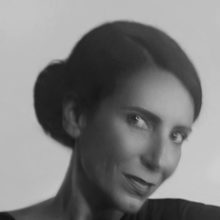 Wanda Tuerlinckx is a freelance photographer based in Amsterdam.

Wanda Tuerlinckx is a freelance photographer based in Amsterdam. 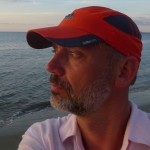 Erwin R. Boer is a Cognitive Robotics professor at Delft University of Technology.

Erwin R. Boer is a Cognitive Robotics professor at Delft University of Technology.