They can’t build the machines fast enough to satisfy the demand, particularly from Italian end-users. A1 Concepts Let’s Pizza machines are in Europe and soon will be coming to the US. The devices don’t just reheat frozen pizzas; they create an authentic 10.5″ pizza, made from scratch with fresh ingredients in less than 2-1/2 minutes. The machine mixes dough, rolls it out, adds toppings, cooks the pie and then dispenses it in a take-away box all in less than 3 minutes! 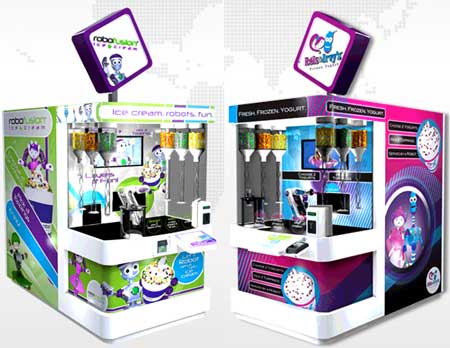 On the horizon are restaurants with iPad/tablet menues and robotic servers — there are already experiments like this going on in China — and noodle cutting, falafel cutting and sushi roll rolling and cutting machines.

Common to all these new devices are simple-to-use order entry and payment screens, the acceptance of currency, coins and credit cards, and the “watch factor,” i.e., the ability to see what’s going on inside the machine.