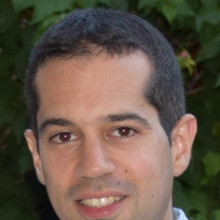 Davide Scaramuzza (1980, Italian) is Assistant Professor of Robotics at the University of Zurich, where he does research at the intersection of robotics and computer vision. He did his PhD in robotics and computer vision at ETH Zurich and a postdoc at the University of Pennsylvania. From 2009 to 2012, he led the European project “sFly”, which introduced the world’s first autonomous navigation of micro drones using visual-inertial sensors and onboard computing. For his research contributions, he was awarded an SNSF-ERC Starting Grant, the IEEE Robotics and Automation Early Career Award, and a Google Research Award. He coauthored the book “Introduction to Autonomous Mobile Robots” (published by MIT Press) and more than 80 papers on robotics and perception. In 2015, three of his lab members created a venture dedicated to the commercialization of visual-inertial navigation solutions for mobile robots, which became part of Facebook-Oculus VR at the end of 2016.


›   Drones can almost see in the dark

›   Drone flight through narrow gaps using onboard sensing and computing

›   Quadrotor automatically recovers from failure or aggressive launch, without GPS