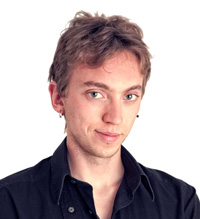 Federico Pistono is an award-winning journalist, social entrepreneur, scientific educator, activist, and aspiring filmmaker. He is author of the book Robots Will Steal Your Job, but that's OK: How to Survive the Economic Collapse and be Happy and the Sci-Fi Novelette "A tale of Two Futures".

He routinely tours around the world, lecturing at TEDx events, conferences, universities, and symposia; such as TEDxVienna, Rio de Janeiro, São Paulo, Porto Alegre, Cologne, Vancouver, TEDxBologna, Los Angeles, and San Francisco. He was interviewed by several newspapers, radios, TVs, and magazines; among which The Huffington Post, Forbes magazine, Folha de S. Paulo (the most influential newspaper in Brazil), RAI Italian National TV, and the Institute for Ethics and Emerging Technologies.

Federico has written several articles for newspapers and blogs regarding a variety of topics, from science, technology, Internet communities and social media, artificial intelligence, climate change, technological unemployment and the future of society. He hosted hundreds of hours of podcasts covering the impact of technology in society, activism, as well as science-related news.

At the age of 16 he was awarded a full scholarship for the prestigious United World College of the Adriatic, he then received a Bachelor of Science in Computer Science from the University of Verona. He continued his studies by completing the online course at Stanford of Machine Learning; and in 2012 he graduated with full scholarship from Singularity University, NASA Ames Research Park, Silicon Valley, whose studies included Synthetic Biology, Artificial Intelligence and Robotics, Nanotechnology and Digital Fabrication, Energy and Environmental Systems, Space and Physical Sciences, Design, Future Studies and Forecasting, Policy, Law and Ethics.

He is Co-Founder and CEO of Esplori, a startup that aims to provide an inclusive, global learning environment, where anyone can learn anything, anywhere, without physical or language barriers; empowering individuals and communities to access online courses in their native language, through an interactive and engaging platform for learning, scalable and adaptable to the rapid changes in society, economy, and technology.