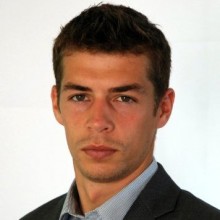 
Matthias Fässler is a PhD student at Prof. Scaramuzza's Robotics and Perception Group of the University of Zurich. His research interests include control and robust state estimation for agile quadrotor flight. He received his Bachelor's and his Master's degree in mechanical engineering from ETH Zurich in 2010 and 2012, respectively. During his studies at ETH, he focused on robotics and control and accomplished his Master's thesis on coaxial helicopter control at the University of Pennsylvania. In 2014, he received the KUKA Innovation Award for his work on aerial-guided navigation of ground robots among movable obstacles.