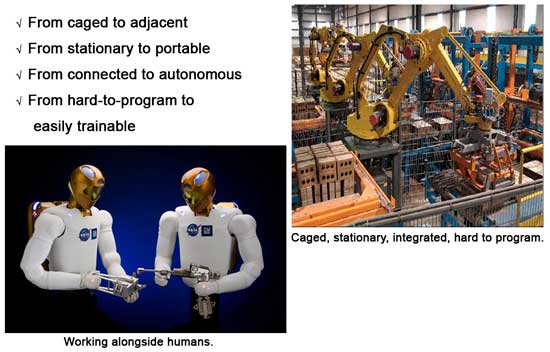 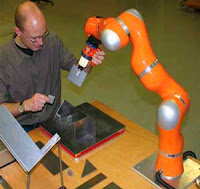 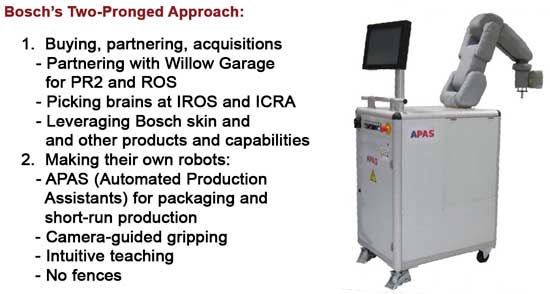 Up until late 2011 when Pres. Obama made manufacturing and robotics an issue, the US lacked public-private activity like the EU’s SME Robotics project. But there was independent venture-funded activity. Rodney Brooks, one of the founders of iRobot and a professor at MIT, started a company to develop a low-cost co-robot. Still in the development phase, but venture funded to the tune of $32 million, Heartland Robotics has more than 60 people working full-time to produce a low-cost, flexible, easily trainable, lightweight robotic assistant (co-robot). One of the more interesting aspects of Heartland’s project is providing an Apple-like app store where users can share routines and functions.
Although the Boston Globe intimated that the Heartland robot would sell for only $5,000, be on a rolling base, be trainable without programming, and have sensors which enable it to work safely with humans, the currently rumored price for a Heartland single-armed co-robot is $15,000.Although Heartland hasn’t officially announced a launch date, they have reserved a large booth at next January’s Automate 2013 in Chicago. A media launch date will be earlier, but the Automate show will be a place for a lot of would-be-users and buyers to see the new bots in action.

The clock is ticking for this type of co-robot. The first one to market will benefit. Will it be Heartland, Redwood or somebody else?
Cynics thought Foxconn’s 2011 announcement that they intended to deploy 1 million robots in their factories in China within 3 years was a ploy, a trick, impossible, unreal. But in late 2011 they launched and built an R&D facility and a factory in Taiwan to build their own robots. And they’ve begun to hire 2,000 engineers to man this project.
Nobody knows yet whether any other robot manufacturer will supply Foxconn. However, rumors say that ABB may be in negotiations to provide them with some of their headless two-armed FRIDA robots.
If Foxconn succeeds they will almost double the world’s industrial robot population, throw the “steady growth” industrial robot figures to the wind, and help themselves better manage the ever increasing popularity of their contract manufacturing and assembly services.Bottom Line:
Global demand for robotic solutions is increasing, thus the world of robotics must change rapidly and cultivate scientific solutions to enhance the technologies to meet those needs. Those robotic companies – like the ones presented in this article – who will succeed in this new industry, are those that can best develop applications and robots that meet those changing needs.Robots like C3PO of Star Wars fame are getting closer every day!

A version of this post originally appeared on Singularity Hub, June 6, 2012.