Do you like cat videos? Or maybe you prefer golden eagles hunting goats by throwing them off cliffs? Or perhaps you favor strange new life forms, recently discovered at the bottom of the Pacific? What if we could produce similar results in the virtual world, with new creatures and new, never-before-seen, behavior?

The body and brain of a creature evolved in physical simulation, using new techniques which permit higher levels of behavioral complexity, for increased entertainment value.

In 1994, Karl Sims showed the world a novel way to create creature content. Using artificial evolution in a physically simulated virtual world, he created simple but compelling beings that would capture the imagination of those who beheld them for decades to come. Today, new research builds on that foundation by finding ways to add more complexity to evolved virtual creatures, bringing them ever closer to becoming just as entertaining as their real, non-virtual, counterparts.

These advances are presented in four parts below, each with an explanatory video, as well as a link to the academic publication.

When humans have to learn a complex behavior, they often approach it as a sequence of smaller skills to be learned. The ESP method brings a similar approach to evolved virtual creatures. ESP is named for its principal components: encapsulation (to preserve component skills throughout higher development), a syllabus (a human-designed sequence in which such skills are progressively acquired) and pandemonium (a method for resolving conflicts between skills in the developing brain). With the introduction of ESP, behaviors were achieved in evolved virtual creatures that were approximately twice as complex as the previous state of the art—a barrier which had not been broken since being set by Sims nearly two decades before.

Extending the original ESP system, a more general version allows creatures to more fully adapt their bodies to multiple skills as they learn complex behaviors. The original ESP system greatly increases efficiency by assuming certain body changes won’t occur after the first skill is learned. But when computing resources allow it, a system of retesting and reconciliation can yield greater variety, better adapted creatures, or both.

Traditional evolved virtual creatures are actuated by invisible implicit motors at every degree of freedom of every joint. By replacing these with simple linear-spring muscles, a new level of body complexity can be evolved. When these muscles are added, removed, and modified by evolution to help creatures achieve their goals, they embody physical intelligence which taps into the viewer’s natural attraction to purposeful and efficient body structure.

Simulated-soft-body muscles for the next level of morphological complexity

Moving beyond the previous implementation’s linear-spring model, full soft-body simulation is used to evolve creatures with muscles that bulge, stretch, and wrap around the body, taking the next step on a nature-inspired path to the kind of meaningful body complexity that holds so much appeal in natural creatures.

Soft-Body Muscles for Evolved Virtual Creatures: The Next Step on a Bio-Mimetic Path to Meaningful Morphological Complexity – ECAL 2015 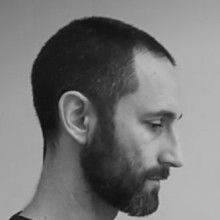 Dan Lessin is a postdoctoral researcher at the REAL Lab (Robotics, Evolution, and Art Lab) at ITU Copenhagen in Denmark.

Dan Lessin is a postdoctoral researcher at the REAL Lab (Robotics, Evolution, and Art Lab) at ITU Copenhagen in Denmark.