By Eric Liang and Richard Liaw and Clement Gehring

In this blog post, we explore a functional paradigm for implementing reinforcement learning (RL) algorithms. The paradigm will be that developers write the numerics of their algorithm as independent, pure functions, and then use a library to compile them into policies that can be trained at scale. We share how these ideas were implemented in RLlib’s policy builder API, eliminating thousands of lines of “glue” code and bringing support for Keras and TensorFlow 2.0.

One of the key ideas behind functional programming is that programs can be composed largely of pure functions, i.e., functions whose outputs are entirely determined by their inputs. Here less is more: by imposing restrictions on what functions can do, we gain the ability to more easily reason about and manipulate their execution.

In TensorFlow, such functions of tensors can be executed either symbolically with placeholder inputs or eagerly with real tensor values. Since such functions have no side-effects, they have the same effect on inputs whether they are called once symbolically or many times eagerly.

If you’re not familiar with RL, all this function is saying is that we should try to improve the probability of good actions (i.e., actions that increase the future returns). Such a loss is at the core of policy gradient algorithms. As we will see, defining the loss is almost all you need to start training a RL policy in RLlib.

Given a set of rollouts, the policy gradient loss seeks to improve the probability of good actions (i.e., those that lead to a win in this Pong example above).

A straightforward translation into Python is as follows. Here, the loss function takes $(\pi, s, a, r)$, computes $\pi(s, a)$ as a discrete action distribution, and returns the log probability of the actions multiplied by the returns:

There are multiple benefits to this functional definition. First, notice that loss reads quite naturally — there are no placeholders, control loops, access of external variables, or class members as commonly seen in RL implementations. Second, since it doesn’t mutate external state, it is compatible with both TF graph and eager mode execution. 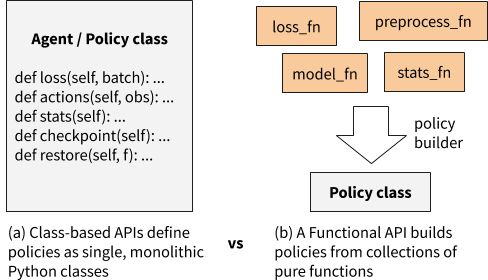 In contrast to a class-based API, in which class methods can access arbitrary parts of the class state, a functional API builds policies from loosely coupled pure functions.

In this blog we explore defining RL algorithms as collections of such pure functions. The paradigm will be that developers write the numerics of their algorithm as independent, pure functions, and then use a RLlib helper function to compile them into policies that can be trained at scale. This proposal is implemented concretely in the RLlib library.

RLlib is an open-source library for reinforcement learning that offers both high scalability and a unified API for a variety of applications. It offers a wide range of scalable RL algorithms.

Example of how RLlib scales algorithms, in this case with distributed synchronous sampling.

Given the increasing popularity of PyTorch (i.e., imperative execution) and the imminent release of TensorFlow 2.0, we saw the opportunity to improve RLlib’s developer experience with a functional rewrite of RLlib’s algorithms. The major goals were to:

At a high level, these builders take a number of function objects as input, including a loss_fn similar to what you saw earlier, a model_fn to return a neural network model given the algorithm config, and an action_fn to generate action samples given model outputs. The actual API takes quite a few more arguments, but these are the main ones. The builder compiles these functions into a policy that can be queried for actions and improved over time given experiences:

These policies can be leveraged for single-agent, vector, and multi-agent training in RLlib, which calls on them to determine how to interact with environments:

We’ve found the policy builder pattern general enough to port almost all of RLlib’s reference algorithms, including A2C, APPO, DDPG, DQN, PG, PPO, SAC, and IMPALA in TensorFlow, and PG / A2C in PyTorch. While code readability is somewhat subjective, users have reported that the builder pattern makes it much easier to customize algorithms, especially in environments such as Jupyter notebooks. In addition, these refactorings have reduced the size of the algorithms by up to hundreds of lines of code each. 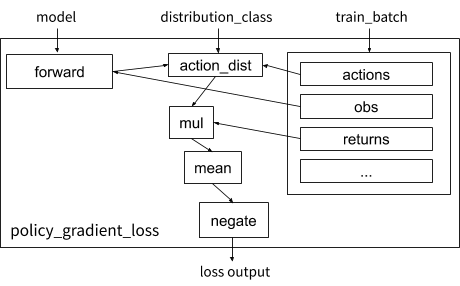 Visualization of the vanilla policy gradient loss function in RLlib.

Let’s take a look at how the earlier loss example can be implemented concretely using the builder pattern. We define policy_gradient_loss, which requires a couple of tweaks for generality: (1) RLlib supplies the proper distribution_class so the algorithm can work with any type of action space (e.g., continuous or categorical), and (2) the experience data is held in a train_batch dict that contains state, action, etc. tensors:

To add the “returns” array to the batch, we need to define a postprocessing function that calculates it as the temporally discounted reward over the trajectory:

Given these functions, we can then build the RLlib policy and trainer (which coordinates the overall training workflow). The model and action distribution are automatically supplied by RLlib if not specified:

Now we can run this at the desired scale using Tune, in this example showing a configuration using 128 CPUs and 1 GPU in a cluster:

While this example (runnable code) is only a basic algorithm, it demonstrates how a functional API can be concise, readable, and highly scalable. When compared against the previous way to define policies in RLlib using TF placeholders, the functional API uses ~3x fewer lines of code (23 vs 81 lines), and also works in eager: 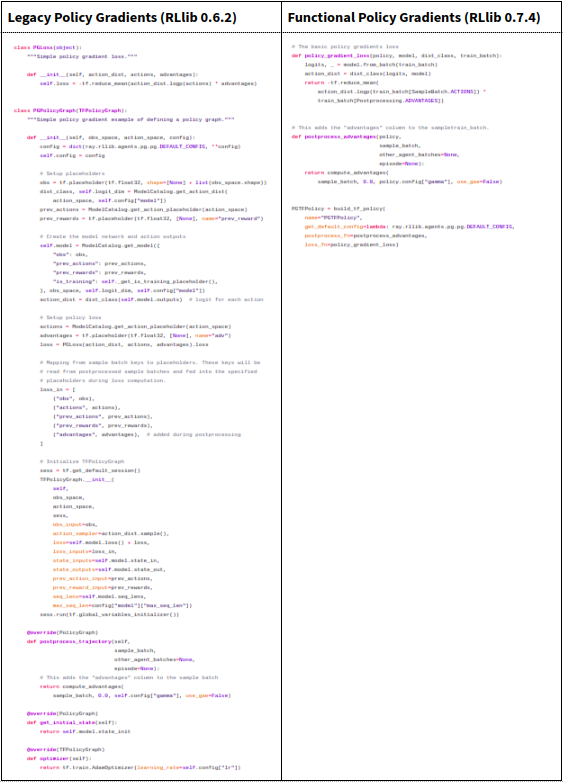 Comparing the legacy class-based API
with the new functional policy builder API
Both policies implement the same behaviour, but the functional definition is
much shorter.

Under the hood, build_tf_policy takes the supplied building blocks (model_fn, action_fn, loss_fn, etc.) and compiles them into either a DynamicTFPolicy or EagerTFPolicy, depending on if TF eager execution is enabled. The former implements graph-mode execution (auto-defining placeholders dynamically), the latter eager execution.

The main difference between DynamicTFPolicy and EagerTFPolicy is how many times they call the functions passed in. In either case, a model_fn is invoked once to create a Model class. However, functions that involve tensor operations are either called once in graph mode to build a symbolic computation graph, or multiple times in eager mode on actual tensors. In the following figures we show how these operations work together in blue and orange: 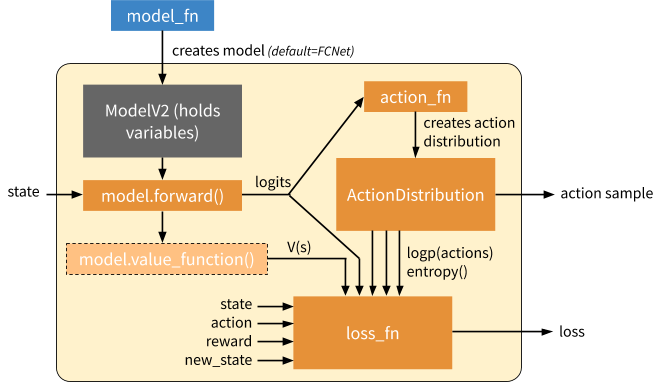 Overview of a generated EagerTFPolicy. The policy passes the environment state through model.forward(), which emits output logits. The model output parameterizes a probability distribution over actions (“ActionDistribution”), which can be used when sampling actions or training. The loss function operates over batches of experiences. The model can provide additional methods such as a value function (light orange) or other methods for computing Q values, etc. (not shown) as needed by the loss function.

This policy object is all RLlib needs to launch and scale RL training. Intuitively, this is because it encapsulates how to compute actions and improve the policy. External state such as that of the environment and RNN hidden state is managed externally by RLlib, and does not need to be part of the policy definition. The policy object is used in one of two ways depending on whether we are computing rollouts or trying to improve the policy given a batch of rollout data:

Training: Forward and backward pass to learn on a batch of experiences. In this mode, we call the loss function to generate a scalar output which can be used to optimize the model variables via SGD. In eager mode, both action_fn and loss_fn are called to generate the action distribution and policy loss respectively. Note that here we don’t show differentiation through action_fn, but this does happen in algorithms such as DQN.

RL training inherently involves a lot of state. If algorithms are defined using pure functions, where is the state held? In most cases it can be managed automatically by the framework. There are three types of state that need to be managed in RLlib:

Next we investigate RLlib’s eager mode performance with eager tracing on or off. As shown in the below figure, tracing greatly improves performance. However, the tradeoff is that Python operations such as print may not be called each time. For this reason, tracing is off by default in RLlib, but can be enabled with “eager_tracing”: True. In addition, you can also set “no_eager_on_workers” to enable eager only for learning but disable it for inference:

Eager inference and gradient overheads measured using rllib train --run=PG --env=<env> [ --eager [ --trace]] on a laptop processor. With tracing off, eager imposes a significant overhead for small batch operations. However it is often as fast or faster than graph mode when tracing is enabled.

To recap, in this blog post we propose using ideas from functional programming to simplify the development of RL algorithms. We implement and validate these ideas in RLlib. Beyond making it easy to support new features such as eager execution, we also find the functional paradigm leads to substantially more concise and understandable code. Try it out yourself with pip install ray[rllib] or by checking out the docs and source code.