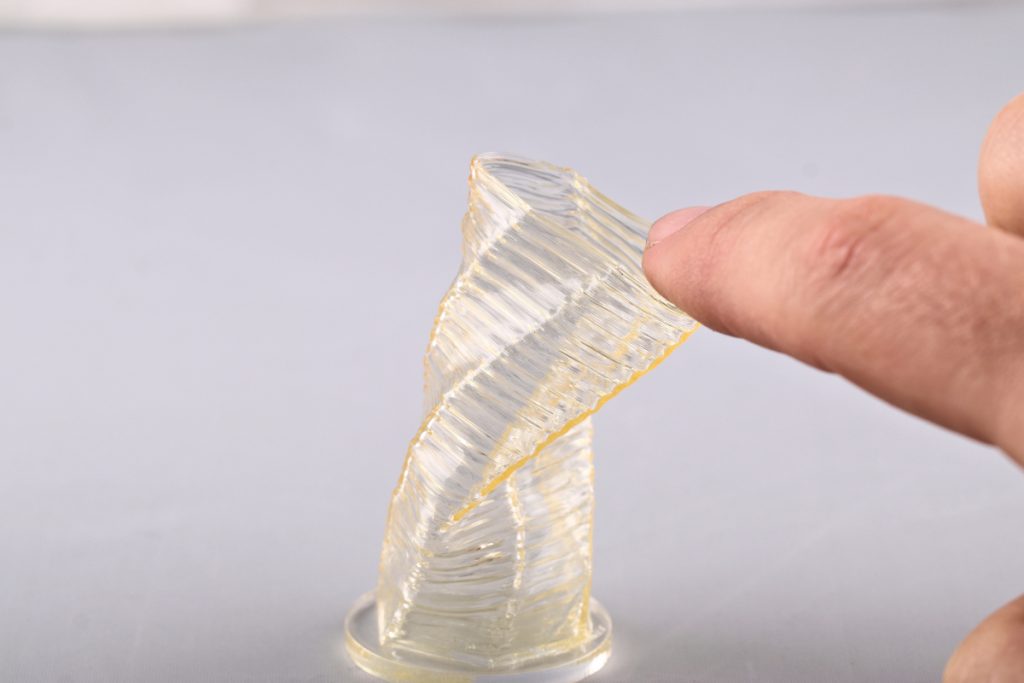 Future generations of robots will work very differently from those that assemble entire vehicles or solder electronics onto circuit boards at lightning speed on factory floors today. They will leave the factory halls and start working with people, handing them a tool at the right moment or assisting them in assembling heavy components. They will appear in agriculture, helping harvest the fields or process the fruits. And they will increasingly be found in living rooms, supporting and entertaining people there or simply making them feel less alone.

Of course, these robots will also look different from the enormous metallic contraptions found in today’s industrial plants. Their appearance will change along with their new functions. Whenever they come into contact with people, they will be gentle and soft so that they won’t hurt anyone – and “soft” here actually means that they are made of conformable materials; that their surface is elastic, flexible and stretchable. Of course, at the same time they are equipped with comprehensive sensor technology that immediately registers every touch and every approach, in order to be able to react appropriately. Today, the development of these soft electronics and robotics mostly relies on synthetic materials such as silicone elastomers – a rubber with very good elastic properties but of fossil origin. This also means that if soft robots become as omnipresent in the future as smartphones are today, the tech-waste grows substantially once again. This raises the question: Where are the biodegradable alternatives? And if they exist, how can we make truly empowering robots that move, sense, and react to their environment?

Martin Kaltenbrunner, head of the Soft Materials Laboratory at the Johannes Kepler University in Linz, Austria, investigates such sustainable alternatives for our future technologies. His team focuses on technologies that interface the human body and, therefore, are equally soft and conformable. Wearable electronics, stretchable energy supplies, and biomimetic robots are just a few examples. And by addressing sustainability, his team adds a new twist to these soft technologies.

The scientific breakthrough was achieved in 2020, when Kaltenbrunner and his team discovered a frugal way to make biodegradable gels (biogels) extremely resilient and durable but still vanish when disposed. Based on the abundant biopolymer gelatin, their material had similar properties and performance than the non-degradable silicone rubbers, paving the way for its use in soft robots.

Now, the doctoral students Andreas Heiden and David Preninger have built a system to 3D print this biogel into complex shapes. They have printed finger-like robots that use intricate sensor networks to sense their own deformation and also objects in their surroundings. Together with Florian Hartmann, materials engineer at EPFL, they have published their research in the renowned journal Science Robotics.

Nature as a source of inspiration

Soft robotics greatly benefits from nature as a source of inspiration, introducing innate means of safe interaction between robotic appliances and living organisms. Kaltenbrunner soon realized that despite soft robotics being largely inspired by nature, an inherent “feature” of nature’s creations was missing: biodegradability. Once a soft robot has reached its end-of-life, there is often no simple solution to recycle its components or treating waste in an environmentally friendly manner.

Introducing biodegradable materials to soft robotics seems to be the logical solution, but existing materials were just not durable enough or were difficult to process. Kaltenbrunner and his team were driven to engineer bioderived materials such as gels based on the biopolymer gelatin, that can match the performance of conventional synthetic elastomers, yet degrade fully after their intended use – leaving essentially no trace of having existed. About two years ago, published in the journal Nature Materials, they optimized such gels to be of use in on-skin electronics, and for soft robots. Based on naturally occurring materials as degradable building blocks that are durable, it is a broadly applicable gelatin-based biogel that unites the challenging needs of resilient yet sustainable (soft) robots in a single platform. It is highly stretchable and elastic—and its thermoplastic. An attribute that lets the material melt when heated and makes it perfectly suitable for 3D-printing.

The deformable structure of soft robots poses challenges in fabrication and assembly. Unlike conventional robots that are screwed together from individual parts, soft robots are manufactured as monolithic blocks. To this end, 3D printing is a versatile fabrication strategy that also allows to produce complex objects. Heiden and Preninger designed a custom system based on Fused Deposition Modeling (FDM) to print their biogel. FDM is one of the most common 3d printing methods nowadays and based on fusing melted polymers that become solid again when cooled. For printing the biogel, the material is melted in a medical syringe and squeezed through the tip, which leads to to the deposition of a biogel “thread” that solidifies quickly after the extrusion. In this manner several two-dimensional layers are drawn subsequently, stacked on each other, to form the three-dimensional object. 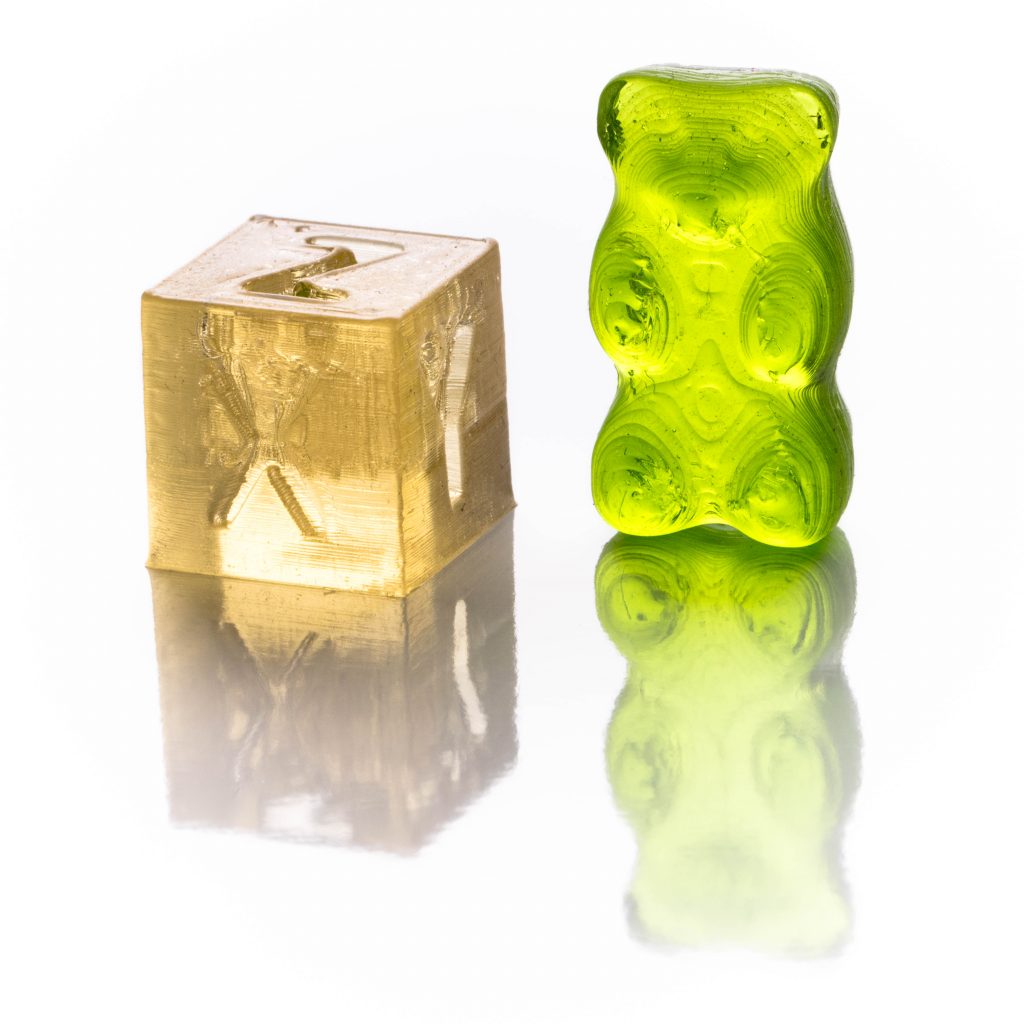 But what happens if a print fails? Usually, you would throw away your print and restart. Having a biodegradable solution, you do not even have to worry about waste production. Alongside this eco-friendly fabrication approach using biodegradable materials, we introduced an additional reuse cycle where the biogel is reprinted up to 5 times, maintaining more than 70% of the initial performance metrics. Utilizing such approaches for a circular economy will enable more sustainable solutions for materials that are less degradable.

By extending the fabrication of biodegradable gels to 3D-printing, the researchers were able to produce versatile soft actuators in various complex shapes and even include integrated sensor networks to let them interact with their environment.  In their Science robotics publication, they demonstrated a finger like actuator that is powered by pressurized air and can bend in any direction, similar to an elephant trunk or an octopus tentacle. A combination of three inflatable chambers within the actuator and the use of a cotton-textile reinforcement make this motion possible. 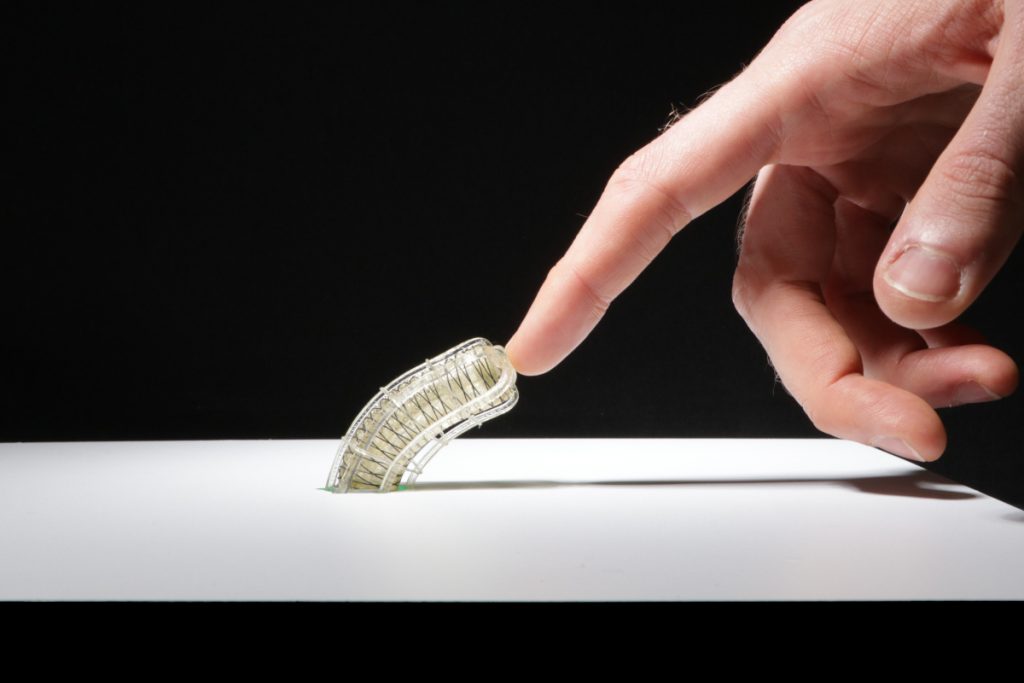 Additionally, the actuator features a distributed sensor network that is based on light transmission through transparent materials. These sensors acquire information on the actuator’s own bending state, and also on impact with objects in its surrounding. Without having eyes, this robot is able to detect an obstacle and remove it with from its vicinity. The function of this single robotic element demonstrates that both motion and sensing can be achieved with sustainable material and fabrication solutions, without making large compromise on performance. And once they are no longer of use, they can be simply disposed. Immersing it in water triggers the swelling and dissolution of the biogel and, in the presence of enzymes, complete decomposition. 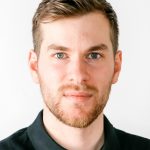 Florian Hartmann is a post-doctoral researcher from the Soft Transducers Laboratory at EPFL.

Florian Hartmann is a post-doctoral researcher from the Soft Transducers Laboratory at EPFL. Andreas Heiden is a Ph.D. student at the Soft Matter Physics Division and the LIT Soft Materials Lab from the Johannes Kepler University Linz.

Andreas Heiden is a Ph.D. student at the Soft Matter Physics Division and the LIT Soft Materials Lab from the Johannes Kepler University Linz. David Preninger is a Ph.D. student at the Soft Matter Physics Division and the LIT Soft Materials Lab from the Johannes Kepler University Linz.

David Preninger is a Ph.D. student at the Soft Matter Physics Division and the LIT Soft Materials Lab from the Johannes Kepler University Linz.