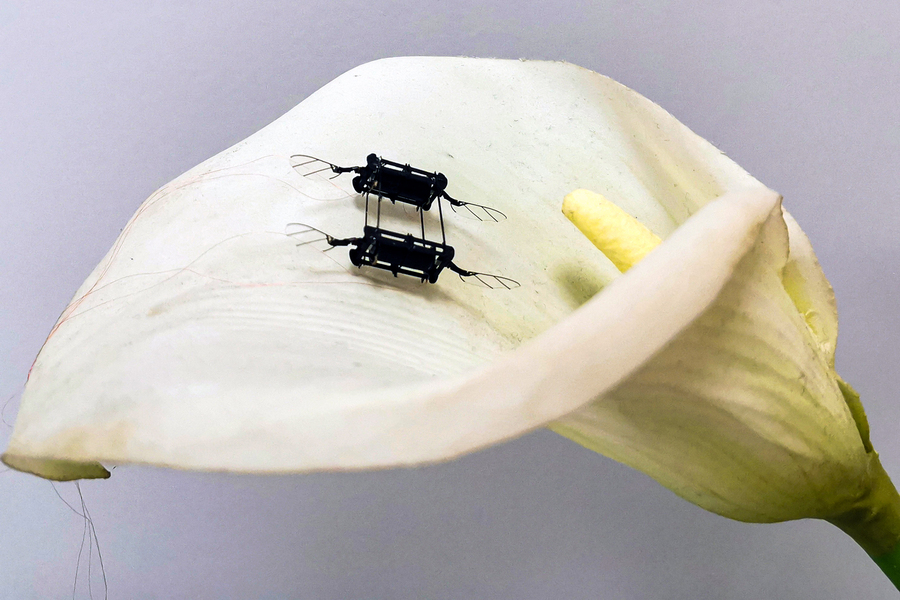 MIT researchers have pioneered a new fabrication technique that enables them to produce low-voltage, power-dense, high endurance soft actuators for an aerial microrobot. Credits: Courtesy of the researchers

When it comes to robots, bigger isn’t always better. Someday, a swarm of insect-sized robots might pollinate a field of crops or search for survivors amid the rubble of a collapsed building.

MIT researchers have demonstrated diminutive drones that can zip around with bug-like agility and resilience, which could eventually perform these tasks. The soft actuators that propel these microrobots are very durable, but they require much higher voltages than similarly-sized rigid actuators. The featherweight robots can’t carry the necessary power electronics that would allow them fly on their own.

Now, these researchers have pioneered a fabrication technique that enables them to build soft actuators that operate with 75 percent lower voltage than current versions while carrying 80 percent more payload. These soft actuators are like artificial muscles that rapidly flap the robot’s wings. 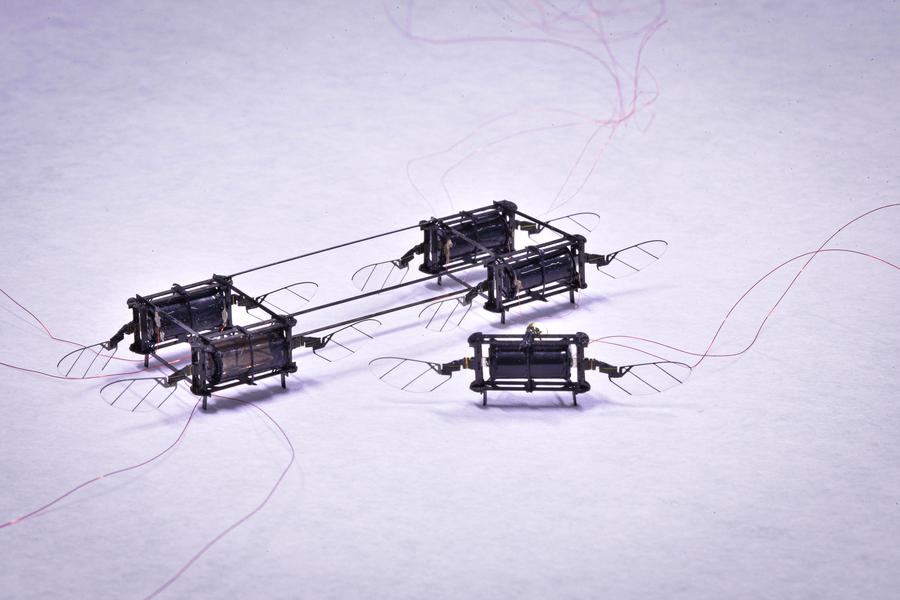 This new fabrication technique produces artificial muscles with fewer defects, which dramatically extends the lifespan of the components and increases the robot’s performance and payload.

“This opens up a lot of opportunity in the future for us to transition to putting power electronics on the microrobot. People tend to think that soft robots are not as capable as rigid robots. We demonstrate that this robot, weighing less than a gram, flies for the longest time with the smallest error during a hovering flight. The take-home message is that soft robots can exceed the performance of rigid robots,” says Kevin Chen, who is the D. Reid Weedon, Jr. ’41 assistant professor in the Department of Electrical Engineering and Computer Science, the head of the Soft and Micro Robotics Laboratory in the Research Laboratory of Electronics (RLE), and the senior author of the paper.

Chen’s coauthors include Zhijian Ren and Suhan Kim, co-lead authors and EECS graduate students; Xiang Ji, a research scientist in EECS; Weikun Zhu, a chemical engineering graduate student; Farnaz Niroui, an assistant professor in EECS; and Jing Kong, a professor in EECS and principal investigator in RLE. The research has been accepted for publication in Advanced Materials and is included in the jounal’s Rising Stars series, which recognizes outstanding works from early-career researchers.

The rectangular microrobot, which weighs less than one-fourth of a penny, has four sets of wings that are each driven by a soft actuator. These muscle-like actuators are made from layers of elastomer that are sandwiched between two very thin electrodes and then rolled into a squishy cylinder. When voltage is applied to the actuator, the electrodes squeeze the elastomer, and that mechanical strain is used to flap the wing. 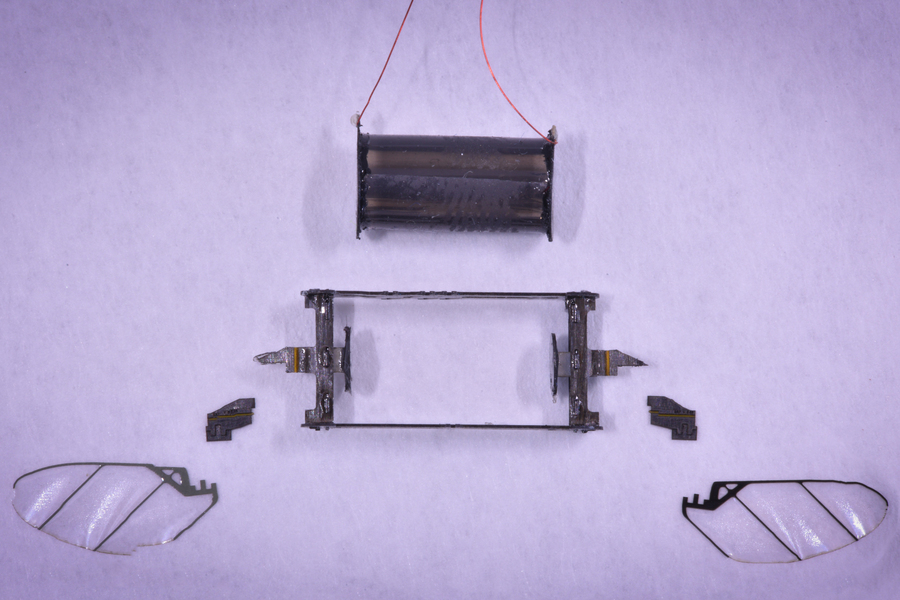 The rectangular microrobot, which weighs less than one-fourth of a penny, has four sets of wings that are each driven by a soft actuator. Credits: Courtesy of the researchers

The more surface area the actuator has, the less voltage is required. So, Chen and his team build these artificial muscles by alternating between as many ultrathin layers of elastomer and electrode as they can. As elastomer layers get thinner, they become more unstable.

For the first time, the researchers were able to create an actuator with 20 layers, each of which is 10 micrometers in thickness (about the diameter of a red blood cell). But they had to reinvent parts of the fabrication process to get there.

One major roadblock came from the spin coating process. During spin coating, an elastomer is poured onto a flat surface and rapidly rotated, and the centrifugal force pulls the film outward to make it thinner.

“In this process, air comes back into the elastomer and creates a lot of microscopic air bubbles. The diameter of these air bubbles is barely 1 micrometer, so previously we just sort of ignored them. But when you get thinner and thinner layers, the effect of the air bubbles becomes stronger and stronger. That is traditionally why people haven’t been able to make these very thin layers,” Chen explains.

He and his collaborators found that if they perform a vacuuming process immediately after spin coating, while the elastomer was still wet, it removes the air bubbles. Then, they bake the elastomer to dry it.

Removing these defects increases the power output of the actuator by more than 300 percent and significantly improves its lifespan, Chen says.

The researchers also optimized the thin electrodes, which are composed of carbon nanotubes, super-strong rolls of carbon that are about 1/50,000 the diameter of human hair. Higher concentrations of carbon nanotubes increase the actuator’s power output and reduce voltage, but dense layers also contain more defects.

For instance, the carbon nanotubes have sharp ends and can pierce the elastomer, which causes the device to short out, Chen explains. After much trial and error, the researchers found the optimal concentration.

Another problem comes from the curing stage — as more layers are added, the actuator takes longer and longer to dry.

“The first time I asked my student to make a multilayer actuator, once he got to 12 layers, he had to wait two days for it to cure. That is totally not sustainable, especially if you want to scale up to more layers,” Chen says.

They found that baking each layer for a few minutes immediately after the carbon nanotubes are transferred to the elastomer cuts down the curing time as more layers are added.

After using this technique to create a 20-layer artificial muscle, they tested it against their previous six-layer version and state-of-the-art, rigid actuators.

During liftoff experiments, the 20-layer actuator, which requires less than 500 volts to operate, exerted enough power to give the robot a lift-to-weight ratio of 3.7 to 1, so it could carry items that are nearly three times its weight. 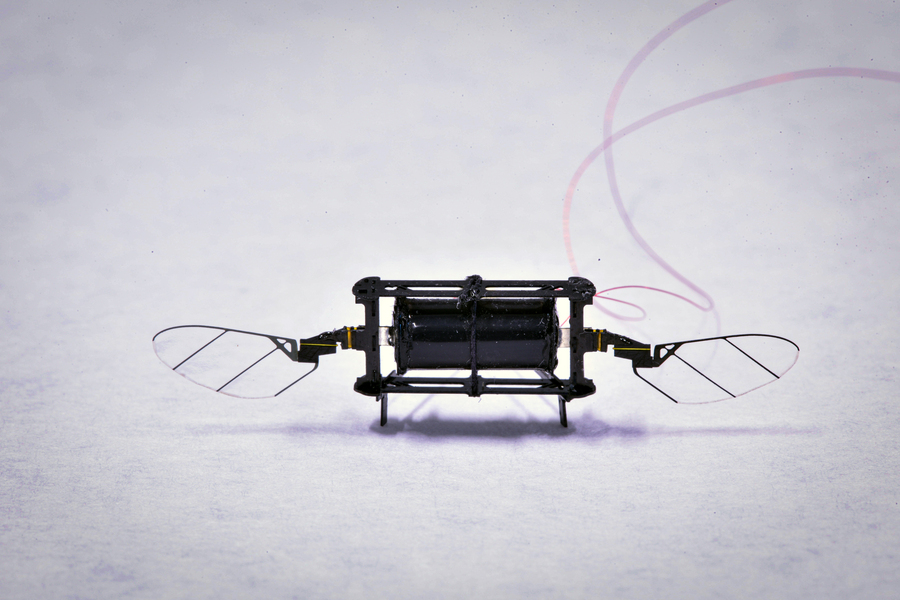 “We demonstrate that this robot, weighing less than a gram, flies for the longest time with the smallest error during a hovering flight,” says Kevin Chen. Credits: Courtesy of the researchers

They also demonstrated a 20-second hovering flight, which Chen says is the longest ever recorded by a sub-gram robot. Their hovering robot held its position more stably than any of the others. The 20-layer actuator was still working smoothly after being driven for more than 2 million cycles, far outpacing the lifespan of other actuators.

“Two years ago, we created the most power-dense actuator and it could barely fly. We started to wonder, can soft robots ever compete with rigid robots? We observed one defect after another, so we kept working and we solved one fabrication problem after another, and now the soft actuator’s performance is catching up. They are even a little bit better than the state-of-the-art rigid ones. And there are still a number of fabrication processes in material science that we don’t understand. So, I am very excited to continue to reduce actuation voltage,” he says.

Chen looks forward to collaborating with Niroui to build actuators in a clean room at MIT.nano and leverage nanofabrication techniques. Now, his team is limited to how thin they can make the layers due to dust in the air and a maximum spin coating speed. Working in a clean room eliminates this problem and would allow them to use methods, such as doctor blading, that are more precise than spin coating.

While Chen is thrilled about producing 10-micrometer actuator layers, his hope is to reduce the thickness to only 1 micrometer, which would open the door to many applications for these insect-sized robots.

This work is supported, in part, by the MIT Research Laboratory of Electronics and a Mathworks Graduate Fellowship.