How robotics is changing the face of Business Process Outsourcing In my world (I am an outsourcing advisor) the robots I deal with do not have arms and legs, or wheels, but are set to have just a big an impact on my industry as any of the physical robots have had on, say, the manufacturing sector. The trouble is, most of the big outsourcing organisations that are set to be impacted the most from this have very little idea what is going to hit them.

Robotic Process Automation (RPA) works best when the processes are repetitive, rules-based and frequent i.e. those tasks that are normally great candidates for outsourcing.

The ‘robotic software agents’ are a relatively new technology that is commonly termed Robotic Process Automation (RPA). Their objective is very straightforward – to carry out the business processes that would normally be done by human beings. This works best when the processes are repetitive, rules-based and frequent i.e. those tasks that are normally great candidates for outsourcing.

It doesn’t take a great leap of logic to then conclude that RPA is a potential competitor to any outsourcing deal that involves business processes (Business Process Outsourcing, or BPO). Particularly when one considers that a software robot would cost around one ninth of a Full Time Equivalent (FTE) person working in, say, the UK or US, or a third of the cost of an FTE working offshore (say India). What RPA does is completely skew the business case dynamics of outsourcing: large, global organisations, such as Infosys, Wipro, TCS, Capgemini, Capita, etc, who have built their business model around employing more and more people, will now have to completely change their whole mindset to cope with the opportunities and threats that RPA brings.

To put some scale on the potential impact the BPO sector globally is currently worth over $300bn. In India alone, more than 3 million people are employed doing BPO work; in the Philippines there are another million. Across Europe and the US millions more workers earn their living through BPO. RPA will have the potential to impact every single one of those jobs.

The technology that exists today is still relatively immature; it can replicate the basic transactional tasks, probably impacting around 20%-40% of processes. But as the technology develops at an accelerating rate, this percentage will most certainly increase.

Here are some examples where RPA has already had a significant impact on businesses:

Crucially, in that last example, the incumbent outsourcing provider, one of India’s big three firms, was kicked out because they were no longer needed.

With this level of impact on the way that organisations do business, there are three ways that the BPO industry could react.

The existing BPO service providers could change their business model, adopt RPA as a core capability and continue to dominate the sector, albeit with a rather painful transition period. The problem here is that, to date, there is very little evidence that this is going to happen. Many of them are simply too vested in the current ‘FTE’ model and see RPA only in terms of it cannibalising their existing revenue streams. It should be clear by now that this is a very short-sighted perspective – not only because there will be a great deal to be gained from first-mover advantage amongst these firms, but also because of the other two changes that are already happening in the market.

We are already seeing a new breed of service provider / systems integrator emerging – these are focussed first-and-foremost on RPA. They will take any set of business processes, whether they have been outsourced or not, and automate them. The remaining tasks that are currently too complex to automate are left for the BPO providers to pick up. It won’t be long before these new providers can also provide the FTE capability as well – their pitch to clients will be ‘automate first’ and, if we can’t automate it right now, we’ll put some people in. In other words, they’ll be taking all of the work that the traditional BPO providers would have had.

As the software gets cleverer and cleverer, and more and more processes can be automated, the economies of scale that give BPO providers their price edge will be quickly eroded.

The third way that the BPO sector will change is perhaps the most interesting. Because the technology is relatively straight-forward to implement (it doesn’t actually require much input from IT), many client organisations will take a DIY approach to managing and automating their own processes – it will be more like BYOR (Bring Your Own Robot) than BPO. We have already seen a number of large companies take this DIY approach, using third parties in only a consultative capacity. As the software gets cleverer and cleverer, and more and more processes can be automated, the economies of scale that give BPO providers their price edge (reducing the cost of an FTE by over 20% in large delivery centres) will be quickly eroded. This could easily spell the end of the large BPO service providers.

When that tipping point will happen is difficult to predict, but it can only be a matter of years away. Right now, though, the robots are making their (virtual) presence felt: my clients are already including ‘RPA capability’ as a selection criteria when outsourcing; they are looking at an ‘onshore + automation’ solution as an alternative to a pure ‘offshore’ one (and one that is economically favourable); and they are looking much more closely at the compliance, efficiency and auditability benefits of using robots over humans. These are certainly early days in the RPA journey, but it is a journey that is set to impact millions of jobs across the world, and where the whole BPO industry will be turned upside down through the simple adoption of BYOR. 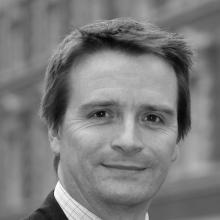 Andrew Burgess is a Director at Source where, amongst other things, he is responsible for the Robotic Process Automation (RPA) practice.

Andrew Burgess is a Director at Source where, amongst other things, he is responsible for the Robotic Process Automation (RPA) practice.