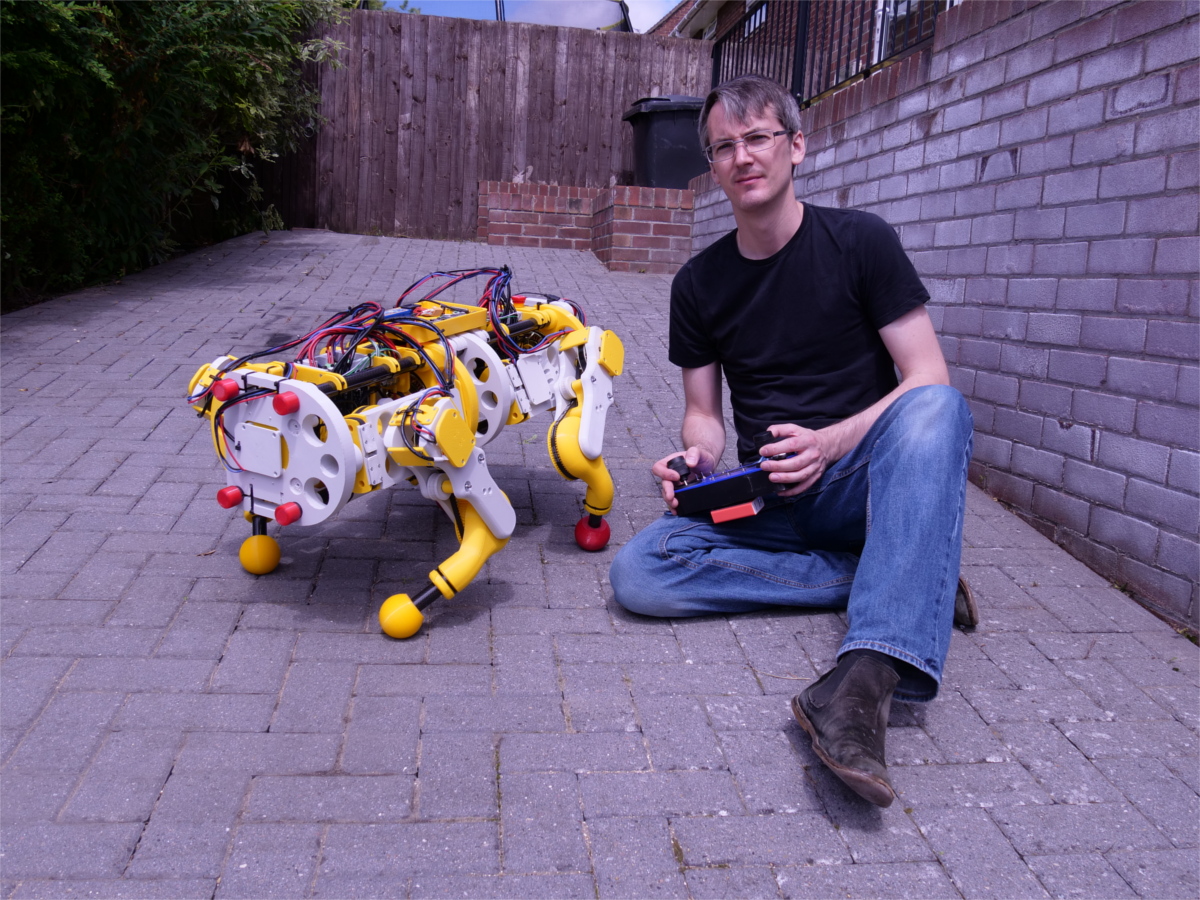 What if you could ride your own giant LEGO electric skateboard, make a synthesizer that you can play with a barcode reader, or build a strong robot dog based on the Boston Dynamics dog robot? Today sees the start of a new series of videos that focuses on James Bruton’s open source robot projects.

James Bruton is a former toy designer, current YouTube maker and general robotics, electrical and mechanical engineer. He has a reputation for building robot dogs and building Iron Man inspired cosplays. He uses 3D printing, CNC and sometimes welding to build all sorts of robotics related creations. Highlights include building Mark Rober’s auto-strike bowling ball and working with Colin Furze to build a life-sized Iron Man Hulkbuster for an official eBay and Marvel promo. He also built a life-sized Bumblebee Transformer for Paramount to promote the release of the Bumblebee movie.

I discovered James’ impressive work in this episode of Ricardo Tellez’s ROS Developers Podcast on The Construct, which I highly recommend. Whether you enjoy getting your hands dirty with CAD files, 3D-printed parts, arduinos, motors and code, or you like learning about the full research & development (R&D) process of a robotics project, you will have loads of hours of fun following this series.

Today I brought one of James’ coolest and most successful open source projects: openDog and its different versions. In James’ own words, “if you want your very own four-legged friend to play fetch with and go on long walks then this is the perfect project for you.” You can access all the CAD files and code here. And without further ado, here’s the full YouTube playlist of the first version of openDog:

James also released another series of videos developing an affordable version of openDog: Mini Robot Dog. This robot is half the size of openDog and its mechanical components and 3D-printed parts are much more cheaper than the former robot without sacrificing compliance. You can see the full development in the playlist below, and access the open source files of version 1 and version 2.

Based on the insight gained through the R&D of openDog, Mini Robot Dog and these test dogs, James built the ultimate robot dog: openDog V2. For this improved version of openDog, he used brushless motors which can be back-driven to increase compliance. And by adding an Inertial Measurements Unit, he improved the balance of the robot. CAD files and code are available here. If you want to find out whether the robot is able to walk, check out the openDog V2 video series:

If you like James Bruton’s project, you can check out his website for more resources, updates and support options. See you in the next post of our focus series!