Laying the ground for robotic strategies in environmental protection

By Benjamin Boettner
Along developed riverbanks, physical barriers can help contain flooding and combat erosion. In arid regions, check dams can help retain soil after rainfall and restore damaged landscapes. In construction projects, metal plates can provide support for excavations, retaining walls on slopes, or permanent foundations. All of these applications can be addressed with the use of sheet piles, elements folded from flat material and driven vertically into the ground to form walls and stabilize soil. Proper soil stabilization is key to sustainable land management in industries such as construction, mining, and agriculture; and land degradation, the loss of ecosystem services from a given terrain, is a driver of climate change and is estimated to cost up to $10 trillion annually.

With this motivation, a team of roboticists at Harvard’s Wyss Institute for Biologically Inspired Engineering has developed a robot that can autonomously drive interlocking steel sheet piles into soil. The structures that it builds could function as retaining walls or check dams for erosion control. The study will be presented at the upcoming 2019 IEEE International Conference on Robotics and Automation. 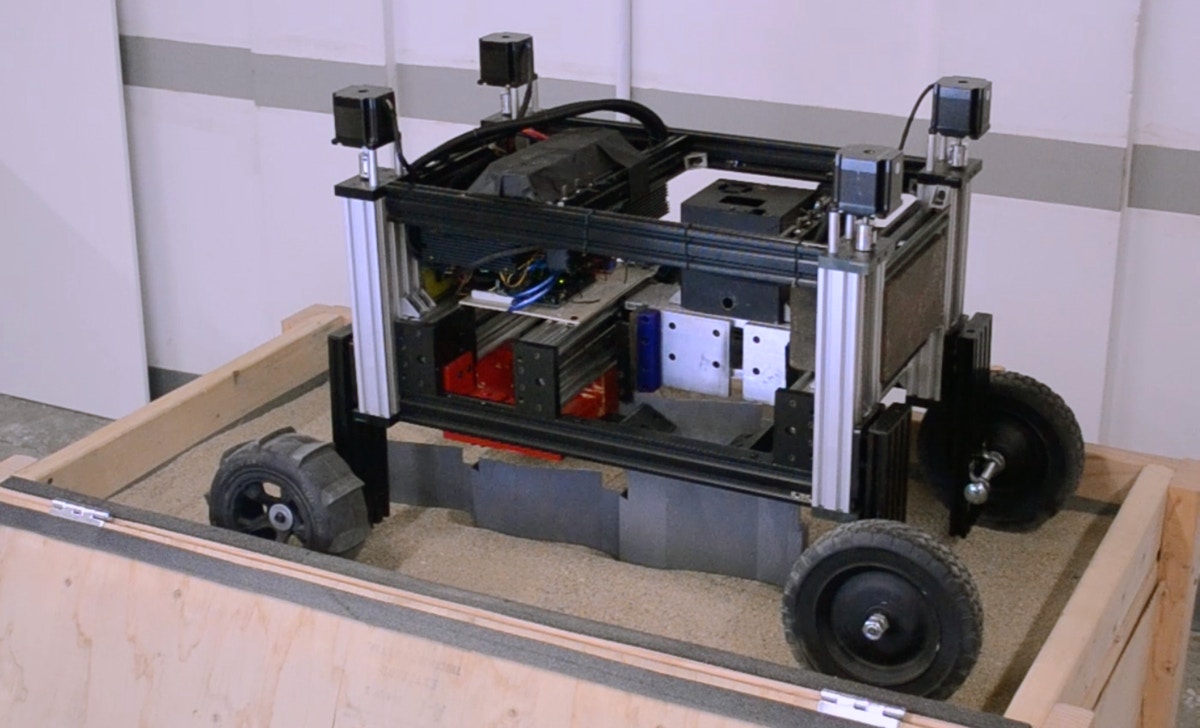 Romu, the Wyss Institute’s sheet pile driving robot has been extensively tested in a sandbox in the laboratory. Credit: Wyss Institute at Harvard University

Conventional sheet pile driving processes are extremely energy intensive. Only a fraction of the weight of typical heavy machinery is used for applying downward force. The Wyss team’s “Romu” robot, on the other hand, is able to leverage its own weight to drive sheet piles into the ground. This is made possible by each of its four wheels being coupled to a separate linear actuator, which also allows it to adapt to uneven terrain and ensure that piles are driven vertically. From a raised position, Romu grips a sheet pile and then lowers its chassis, pressing the pile into the soil with the help of an on-board vibratory hammer. By gripping the pile again at a higher position and repeating this process, the robot can drive a pile much taller than its own range of vertical motion. After driving a pile to sufficient depth, Romu advances and installs the next pile such that it interlocks with the previous one, thereby forming a continuous wall. Once it has used all of the piles it carries, it may return to a supply cache to restock.

The study grew out of previous work at the Wyss Institute on teams or swarms of robots for construction applications. In work inspired by mound-building termites, Core Faculty member Radhika Nagpal and Senior Research Scientist Justin Werfel designed an autonomous robotic construction crew called TERMES, whose members worked together to build complex structures from specialized bricks. Further work by Werfel and researcher Nathan Melenbrink explored strut-climbing robots capable of building cantilevering truss structures, addressing applications like bridges. However, neither of these studies addressed the challenge of anchoring structures to the ground. The Romu project began as an exploration of methods for automated site preparation and installation of foundations for the earlier systems to build on; as it developed, the team determined that such interventions could also be directly applicable to land restoration tasks in remote environments. 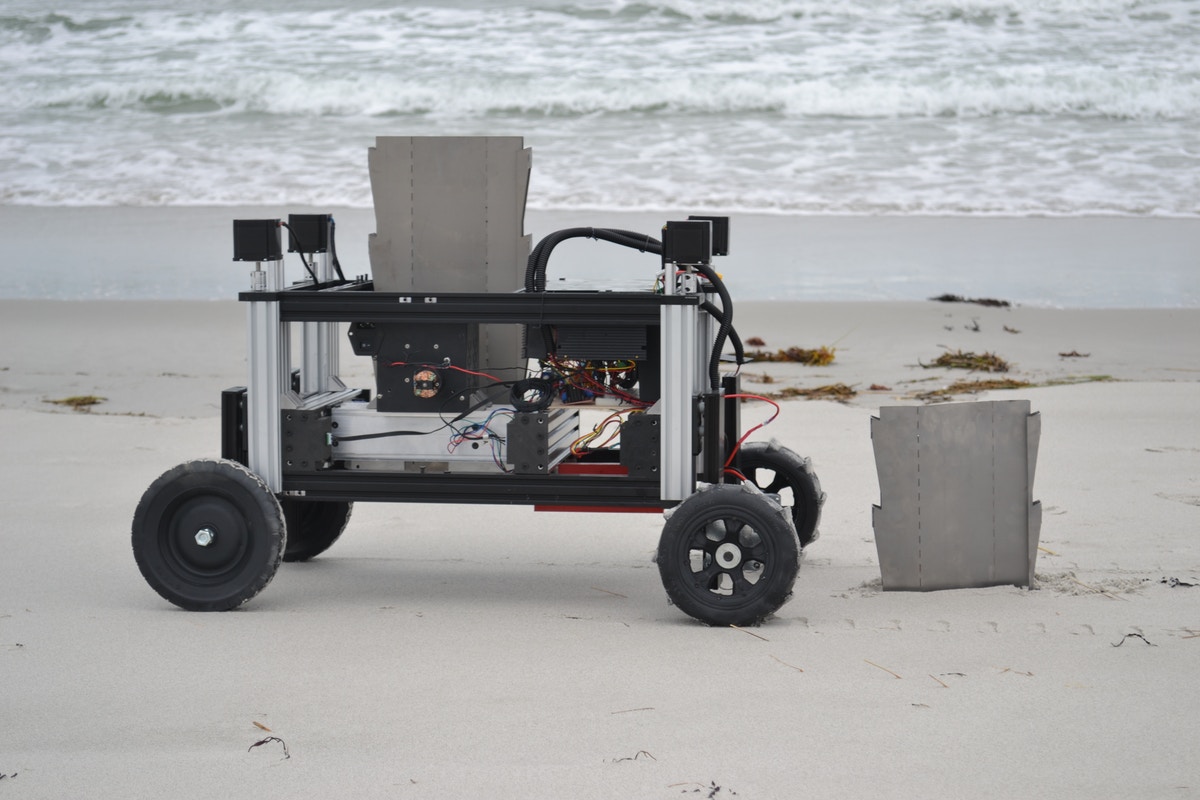 The robot is designed to drive interlocking sheet piles into granular soils like sand on a beach. Credit: Wyss Institute at Harvard University

“In addition to tests in the lab, we demonstrated Romu operating on a nearby beach,” said Melenbrink. “This kind of demonstration can be an icebreaker for a broader conversation around opportunities for automation in construction and land management. We’re interested in engaging with experts in related fields who might see potential benefit for the kind of automated interventions we’re developing.”

The researchers envision large numbers of Romu robots working together as a collective or swarm. They demonstrated in computer simulations that teams of Romu robots could make use of environmental cues like slope steepness in order to build walls in effective locations, making efficient use of limited resources. “The swarm approach gives advantages like speedup through parallelism, robustness to the loss of individual robots, and scalability for large teams,” said Werfel. “By responding in real-time to the conditions they actually encounter as they work, the robots can adapt to unexpected or changing situations, without needing to rely on a lot of supporting infrastructure for abilities like site surveying, communication, or localization.”

“The name Terramanus ferromurus (Romu) is a nod to the concept of ‘machine ecology’ in which autonomous systems can be introduced into natural environments as new participants, taking specific actions to complement and promote human environmental stewardship,” said Melenbrink. In the future, the Terramanus “genus” could be extended by additional robots carrying out different tasks to protect or restore ecosystem services. Based on their findings, the team now is interested in investigating interventions ranging from groundwater retention structures for supporting agriculture in arid regions, to responsive flood barrier construction for hurricane preparedness. Future versions of the robot could perform other interventions such as spraying soil-binding agents or installing silt fencing, such that a family of these robots could act to stabilize soil in a wide range of situations.

In many scenarios for environmental protection or restoration, the opportunity for action is limited by the availability of human labor and by site access for heavy machinery. Smaller, more versatile construction machines could provide a solution. “Clearly, the needs of many degraded landscapes are not being met with the currently available tools and techniques,” said Melenbrink. “Now, 100 years after the dawn of the heavy equipment age, we’re asking whether there might be more resilient and responsive ways to approach land management and restoration.”

“This sheet pile driving robot with its demonstrated ability to perform in a natural setting signals a path on which the Wyss Institute’s robotics and swarm robotics capabilities can be brought to bear on both natural and man-made environments where conventional machinery, man power limitations, or cost is inadequate to prevent often disastrous consequences. This robot also could address disaster situations where walling off dangerous chemical spills or released radioactive fluids makes it difficult or impossible for humans to intervene,” said Wyss Institute Founding Director Donald Ingber, M.D., Ph.D., who is also the Judah Folkman Professor of Vascular Biology at HMS and the Vascular Biology Program at Boston Children’s Hospital, as well as Professor of Bioengineering at SEAS.